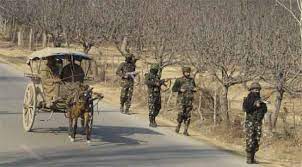 It is often not realized that among the causes of Kashmir problem – inclusion of plebiscite in the Instrument of Accession, reference of Kashmir to UN, halting Indian offensive when it was poised to drive out the invaders from Kashmir, Article 370 has played no less a part in preventing J&K from becoming an integral part of the Indian Union

Why should a state of the Indian Union have a special status?

It conveys a wrong signal not only to Kashmiris but also to the separatists, Pakistan and indeed the international community that J&K is still to become integral part of India, the sooner Article 370 is done away is better.

What is Article 35A?

Article 370 has been the biggest impediment to integration of J&K State into Indian Union. That it was incorporated in the Indian Constitution by the machination of two individuals – Shiekh Abdullah and Nehru is all the more regrettable. Nehru had to eat the humble pie when he had to arrest the Sheikh for his divisive and anti national stance on 8 Aug 1953 but he did not let ..

J&K will no longer enjoy special status now
The Indian Constitution laws will be 100 percent applicable to all residents of Jammu & Kashmir.
Part 4 of the Indian Constitution, the Directive Principle of State Policy and Fundamental Duties will now apply to the state of J&K
There will be no separate flag for J&K now
Article 360 (Financial Emergency) of the Indian Constitution will now be applicable
Minorities (Hindus & Sikhs) will have 16% reservation now
Right to Information & Right to Education will be applicable now
The duration of the legislative assembly will now be five years instead of 6
Article 35A will be nullified. A woman from J&K can still retain her rights and citizenship even if she marries someone out of the J&K state
The Panchayats will enjoy the same powers as in other states.

Why they are important for J&K
It is important to note Article 370(1)(c) explicitly mentions that Article 1 of the Indian Constitution applies to Kashmir through Article 370. Article 1 lists the states of the Union. This means that it is Article 370 that binds the state of J&K to the Indian Union. Removing Article 370, which can be done by a Presidential Order, would therefore make the state independent of India.

Temporary provision or not?

A petition filed by Kumari Vijayalakshmi Jha challenged the validity of Article 370 against the Delhi High Court’s April 11, 2017 order. The petition had said that the continuance of the temporary provision of Article 370 even after dissolution of Constituent Assembly of J&K, and that of J&K Constitution, which has never got the assent of the President of India or Parliament or the government of India, “amounts to fraud on the basic structure of our Constitution”.

The Abrogation of Article 370 was a necessary as it was hampering the development of the State and security of the citizen of the State of Jammu and Kashmir as well as India. History of Kashmir make it clear that it was never a part of Pakistan, even if it didn’t merge with India during Independence but was a part of India since beginning, and looking at the temporary nature of the Article 370 it was obvious since beginning that it will be abrogated one day or the other, if not by the present Government then by our elected government in future. The petty situation of state people and increase of terrorism make it important to revoke the Article and take control over the state for the betterment of the people.