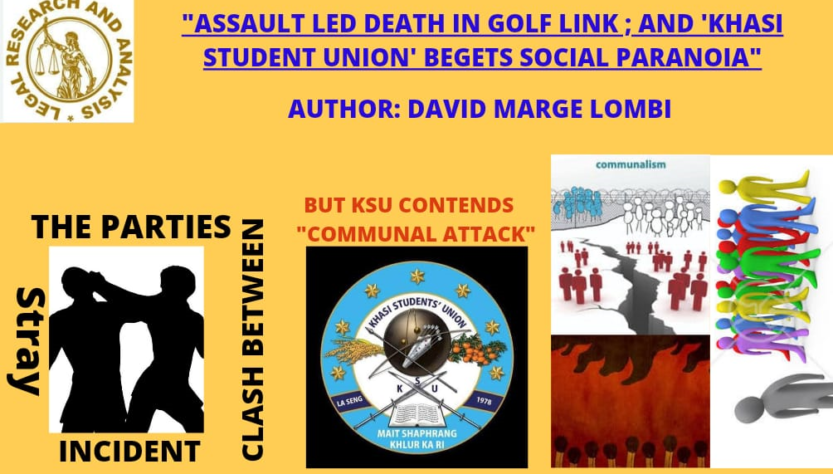 Whoever fights monsters should see to it that in the process he does not become a monster. And if you gaze long enough into an abyss, the abyss will gaze back into you. ——–Friedrich Nietzsche

APPROXIMATION OF THE INCIDENT

An incidence of assault has been covered. On the night of 21 March 2021, the 3 boys from the tribal community of Meghalaya were assaulted in a golf link. Later on 28 March 2021, one Pherlangroi Myrthong, 20, was declared dead at around 4.45 am in morning at the North Eastern Indira Gandhi Regional Institute of Health and Medical Sciences (NEIGRIHMS).¹

KSU TAKE ON THE INCIDENT WITH A XENOPHOBIC-ATTITUDE & WITH LIES

Since time immemorial in the state of Meghalaya, where there were definitely communal angles on the incidents happening within the State, like the incidents of native Vs outsiders time and again reoccurring,[2] [3] [4] the local authorities & pressure groups & especially “Khasi Student Union” chooses to refute the same & keeps silence.

But where there are absolutely no communal angles in the incidents like of 21 March 2021, the instant matter that we are discussing, the leaders of Khasi Student Union like Donald V. Thabah (General Secretary), Lambokstar Marngar (President), goes on rampaging in the State the havoc of lies & social paranoia with regards to such incidents which are actually supposed to be understood as a mere clash between the groups and not premeditated communal attack.

KSU HAVE BEEN SLAMMED LEGITIMATELY FOR ITS INCITING & XENOPHOBIC ATTEMPTS