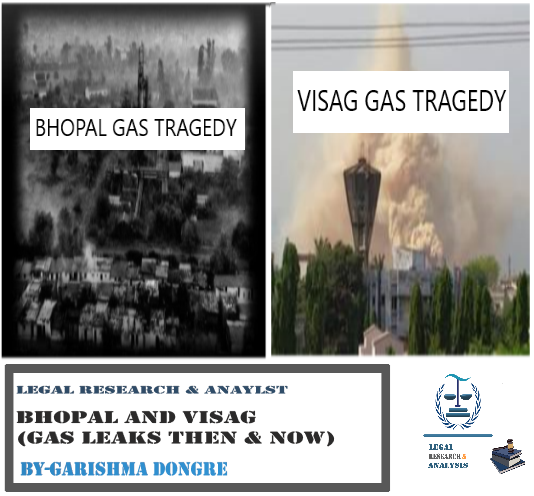 BHOPAL AND VISAG (GAS LEAKS THEN AND NOW)

BHOPAL AND VISAG (GAS LEAKS THEN AND NOW)

Environmental rights are also considered third generation rights[1]. The Right to life (Article  21) which, is an essential human right also implies a right to live without pollution,  environmental degradation and ecological imbalance. To preserve this environment is every  human’s duty and humans should make constant efforts to do so. Nevertheless, some disasters,

mostly chemical disasters happen due to not following laws or human negligence. The recent  chemical disaster that happened is Vizag Gas Leak (VGL) where eleven people died and  hundreds were hospitalized. Many accidents have happened in the past few years and this  reminds us of how there is inadequacy in the legislative framework of dealing with industrial  accidents. Apparently, many industries using hazardous substances concerning legislations  could not keep a pace with the changing times. The concern over environment is growing as  well as degradation of environment, behind this are the chemicals in the atmosphere. There is  no doubt that development is vital for a country but not worth losing human lives, a  development like this is meaningless. Therefore, the article attempts to focus on the gas leak  disasters Bhopal Gas Tragedy (BGT) and Vizag Gas Leak Disaster to see if the situation has  been changed.

Therefore, the article attempts to focus on the gas leak disasters Bhopal Gas Tragedy (BGT)  and Vizag Gas Leak Disaster to see if the situation has been changed. Accordingly, the article  contains following chapters Part I – Origin of the Environment Protection Act, Part II – Critical  Analysis of some legislations, Part III- Has the situation changed? and Part IV will be followed  by conclusion.

PART I- ORIGIN OF THE ENVIRONMENT PROTECTION ACT, 1986

In 1984, the Lethal Methyl Isocyanate (MIC) gas, leaked from the Union Carbide Factory  making it the worst industrial disaster. Over five lakh people were exposed to tons of poisonous MIC gas. The Supreme Court made the settlement in which UCC agreed to take the moral  responsibility and paid a claim of $470 million to the government which was negligible  compared to a multi-billion dollar lawsuit that was filed by an American lawyer in a United  States court[2]. After the incident in Bhopal, the government was blamed for not having proper  laws for safety.

With a lot of pressure on the Department of Environment, the Environment  (Protection) Act, 1986 was introduced under Article 253 of the Constitution of India[3]. The  object of the Act is to provide protection and improvement of environment[4]. Many legislations  were passed for protection and improvement, but the thrust to introduced a developed  legislation came after the aims to implement the recommendations of the U.N. Conference on  Environment. (Stockholm Declaration, 1972)[5].

The recent gas leak that happened in Vishakhapatnam reminded of the disaster that happened  decades ago. In both the cases, laws were insufficient. The gas leaked was Styrene has been  defined a hazardous chemical[6]. Moreover, it can cause cancer on prolonged exposure[7]. Styrene  is classified as a hazardous and toxic chemical, if such a chemical is there more precautions  need to be taken. The cause of the leak was that the protocols for re-commencing operations  after the lockdown were not followed involving a closure of 45 days were not followed.

Coming again on the Bhopal Gas Tragedy, the government realized that the existing laws were  insufficient so after 1984 several pieces of legislations were introduced beginning with –

This Act is an umbrella legislation, but it has some loopholes under some sections

Section 15 does justice by giving penalties are which are more than enough for the offender.  Other than this Act, Indian Penal Code covers the offences related to environment like section  268[8]– “Negligent act likely to spread infection of disease dangerous to life” under this section  the punishment is up to six months or fine or both, Section 278[9]– “Making atmosphere noxious  to health” the punishment provided is five hundred rupees. If section 24 of the Act is applied  then the offender can escape the heavy amounts to pay for the act he/she has done.

Section 16 talks about the offences by companies. The section talks about if the offence is  committed by the company without having knowledge or due diligence it will not be held  liable. In the case of Vizag gas leak there was no proper management, proper temperature was  not maintained the workers also did not have knowledge of such incident happening. Even if  they did not have knowledge of the incident happening many other conditions like the company  was not managed properly, the siren system was also not working to make the people alert. So,  if any company does a similar act it can find a defence under this provision and again the  environment will be at loss.

Under section 19 that there will no cognizance of offence taken unless a sixty days’ notice is provided by any person, these sixty days gives the offender a sufficient time to escape  the liability under the Act.

Another drawback is in section 24 (2), the section says “where any act or omission constitutes  an offender punishable under this Act and also under the other Act then the offender found  guilty of such offence shall be liable to be punished under the other Act and not under this  Act[10].” As in the other laws there is less stringent sentence relating to provisions affecting the  environment. This gives away an escape gate to run away with less stringent punishments.  Keeping this section in the Act just weakens the whole purpose of this Act.

F) Further when we come to liability, there is no provision for strict or absolute liability.  Both these provisions have come from cases. therefore, a provision related to absolute  liability would make the Act more stringent cause strict liability has exceptions, and in  incidents such as Vizag there should not be any exceptions for the offenders though  National Green Tribunal applied strict liability in this case[11].

Under this Act there is a process called EIA, it is a process where projects like infrastructure,  construction, mining, thermal power plants etc[12] are assessed to see what impact the particular  project pose and how it affects the environment without compromising economic development  needs. If the Environment Ministry feels that the project has far too many adverse negative  effects then it will not get environmental clearance.

LG polymers had an affidavit that accepting that it did not have a valid environmental clearance  between 1997 and 2019[13]. LG Polymers come in Category “A” projects and for these projects  proponents it is mandatory for to make the public aware of the environment clearance granted  for their project along with environmental conditions and safeguards at their cost and advertise

it on at least two local newspaper of the district or state[14]. Without EIA, it is difficult to justify  whether a project is in line with protecting the environment. The High Appraisal Committee  report felt that not having environmental clearance as a procedural lapse but indirectly is the reason leading this accident to happen[15]. The appraisal committee is required to determine the  terms of reference addressing all environmental concerns for EIA, though LG polymers did not  inform about the perceived risk to the environment or public but it was the duty of the Ministry  of Environment, Forest and Climate Change (MoEFCC) to examine issues like these. Therefore  (MoEFCC) should focus if any hazardous industry is working without environment clearance.

more than Rs 50 crore. In BGT the dispute about the compensation was settled by Union  Carbide being ordered to pay $470 million[16]. The compensation is inadequate under this Act,  in case of death or permanent disability the compensation offered is Rs 25,000 along with  maximum of Rs 12,500 of medical expenses and Rs 6000 in case of property damage[17]. In case  loss of wages the victim gets Rs 1000 for three months. The reason here is very obvious, in  today’s world these amounts are very low for a victim injured in industrial accidents and how  hazardous these gases are to humans. However, the compensation in Vizag gas leak case has  still to be decided by the Ministry of Environment forest and Climate Change.

PART III – HAS THE SITUATION CHANGED?

In the BGT the most basic failure of the legal system was that there was no NGT National Green Tribunal a court specifically dealing with environmental matters that could determine the causation the leak. The Supreme Court while deciding the settlement had arbitrarily decided on the number of persons falling into various categories of injured persons without any actual assessment. The main problem came up with compensation, the amount of compensation to be paid was based on the nature of the injury and not on the basis of the income that the victim loses. Half of the people still have not received compensation from BGT. Looking at some of the above legislations none of the legislations are made in the point of view of BGT. The above legislations tell us that there are need of amendments and more stringent laws so that there is no weak implementation of environmental laws. Also, industries like with hazardous gases should be in the outskirts of the city, in BGT the Union Carbide was situated right in the centre of populated area which in turn affected many. Similarly, LG Polymers was not exactly situated in a populated area but was situated near a village which also affected many. Moreover, in both the cases it can be seen that how the state government’s action was arbitrary though for different reasons. India is a signatory for many international environmental conventions, this would be better if the states also apply the principles of international conventions. Compensation have not been provided in both the cases to the victims. The compensation in BGT is still on debate and no one knows after how much time would it take in deciding the compensation for victims of Vizag gas leak case. The solution that anyone would think can be at this time is to come up with a new legislation but it takes years for a proper legislation to come so to avoid situations like these in future amendments can be made which makes these laws stringent. Furthermore, in both the cases laws neglect the balance between sustainable development and environment protection. Any violation of environmental law should be strictly dealt with. A valid environment clearance is a must for industry with hazardous chemicals.

Part I discussed the origin of the Environment Protection Act, it discussed in brief the facts of BGT and how there were not proper environmental laws because of which this Act was introduced. Part II discussed the critical analysis of environmental laws including the Environmental Protection Act, 1986 and Public Liability Insurance Act where loopholes where present. Part III was to see if the situation had changed, looking at both these cases (BGT and Vizag) it can be said that nothing has changed. The laws remain the same, without focusing

more on gas leaks, the compensation provided to the victims is also trivial in today’s time. The Indian economy is growing at a tremendous rate but at significant cost in environmental health and public safety as large and small companies throughout the subcontinent continue to pollute It is high time that authorities start thinking about the environment rather than economic development.

[3] THE CONSTITUTION OF INDIA, Article 253 – “Notwithstanding anything in the foregoing provisions of this Chapter, Parliament has power to make any law for the whole or any part of the territory of India for implementing any treaty, agreement or convention with any other country or countries or any decision made at any international conference, association or other body”  https://www.india.gov.in/sites/upload_files/npi/files/coi_part_full.pdf, last visited on 13.08.2020