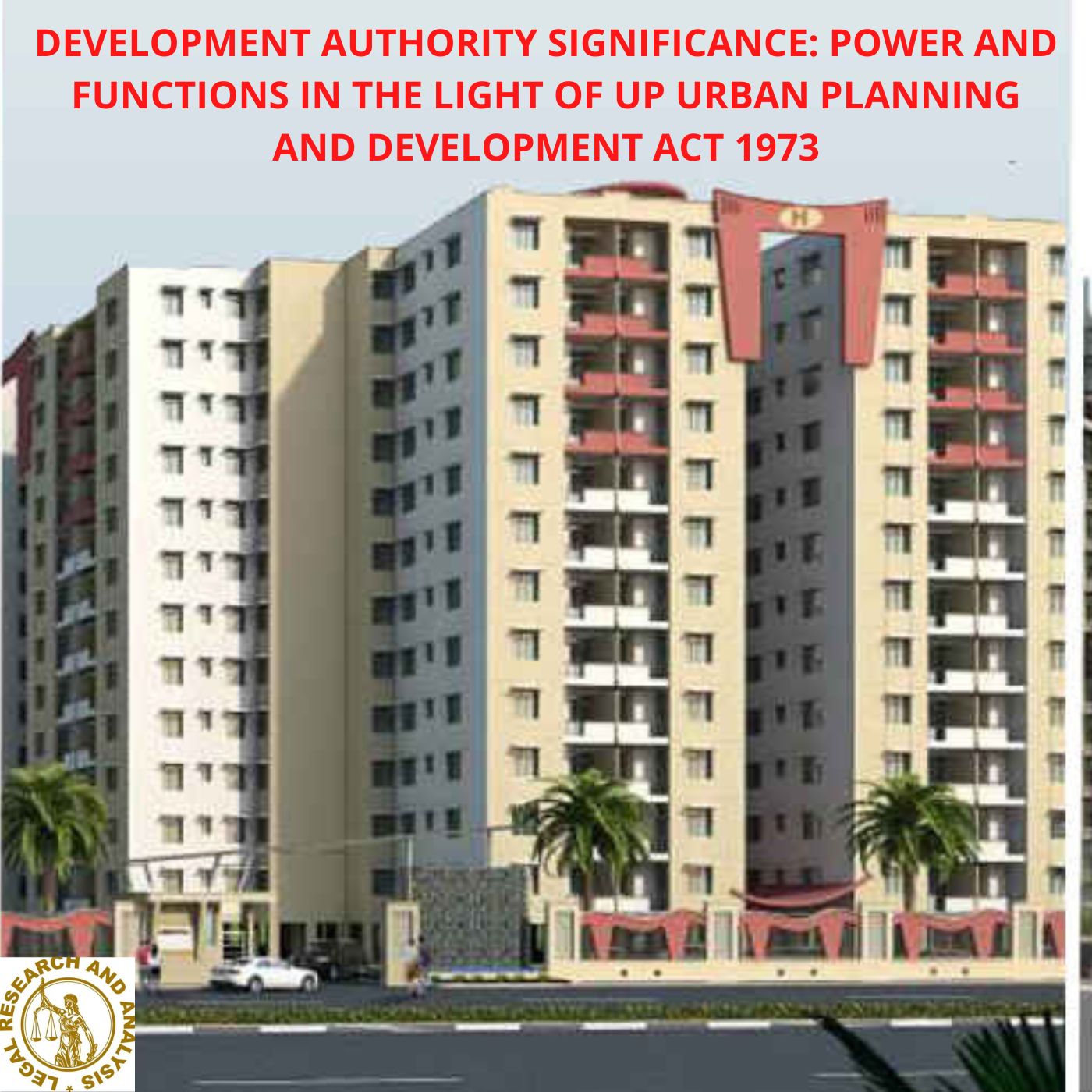 The process of urbanization and migration of people from rural areas to urban areas for better living opportunities has resulted in serious problems with housing, infrastructure, and health.

Therefore, several urban development authorities have been established by various state governments to provide housing, infrastructure, and amenities to its ever-growing population.
The first to come up was the Delhi Development Authority (DDA) in 1957, for the Delhi metropolitan area.

The reason for this enactment was that in the developing areas of the State of Uttar Pradesh, the problems of town planning and urban development need to be tacked resolutely. The existing local bodies and other authorities in spite of their best efforts have not been able to cope with these problems to the desired extent.

As the State Government was of the view that the urban development and planning work in the State had already been delayed it was felt necessary to provide for the early establishment of such Authorities.

According to Section 2(e) of Uttar Pradesh Urban Planning and Development Act, 19731 ‘development’ with its grammatical variations, means the carrying out of the building, engineering, mining, or other operations in, on, over, or under land, or the making of any material change in any building or land, and includes re-development:

According to Section 2(f) of Uttar Pradesh Urban Planning and Development Act, 19732 ‘Development Area’ means any area declared, a development area under Section 3.

Large cities, towns, and even small neighborhoods do not spring up overnight. They are the result of careful planning by civil and design engineers, project managers, architects, environmental planners, and surveyors. The integration of these disciplines is known as urban development.

Urban development is a system of residential expansion that creates cities. Residential areas are the primary focus of urban development. Urban development occurs by expansion into unpopulated areas and/or the renovation of decaying regions. The task of building a ‘world-class’ urban India in a sustainable and planned manner is a tall order. This calls for a gigantic urban planning effort by the government.

Thus, Development Authority shall strive its best to ensure affordable housing in environmentally invigorating habitats with inclusive facilities, especially for the economically weaker section, low and middle-income groups, and competitive price options for the other sections of the society.

Further, section 4(7) states that the Authority in respect of a development area other than that mentioned in Sub-Section (3) shall consist of a Chairman, a Vice Chairman, and not less than five and not more than eleven such other members, including at least one member each from Municipal Boards and Notified Area Committees having jurisdiction in the development area, who shall hold office for such period and on such terms and conditions as may be determined by general or special order of the State Government in this behalf.

OBJECTS OF THE DEVELOPMENT AUTHORITY

According to Section 7 of the U.P. Urban Planning and Development Act, 19736, the Authority shall promote and secure the development of the development area according to the plan and for that purpose, the Authority shall have the power to acquire, hold, manage and dispose of land and other property, to carry out building, engineering, mining, and other operations, to execute works in connection with the supply of water and electricity to dispose of sewage and to provide and maintain other services and amenities and generally to do anything necessary or expedient for purposes of such development and for purposes incidental thereto.

FUNCTIONS OF DEVELOPMENT AUTHORITY
The Development Authority shall perform the following functions:

SUCCESS OF THE DEVELOPMENT AUTHORITY IN UTTAR PRADESH

Through efficient planning & better utilization of available resources, the Development Authorities have been able to play a greater role in urban development by implementing various development projects such as housing, roads, flyovers, metro rail, etc. But unfortunately, there are the following loopholes:

Development Authorities have played an important role wherein the state had to play a major role in providing basic public infrastructure, housing, and industrial development.

The success of any development plan depends on the quantum of proposals being implemented and the acceptability of the habitants without any confrontation and how many of the expectations and aspirations of residents are fulfilled.

The level of provision of adequate physical and community infrastructure and improvement of quality of life is the index of success of any development plan. Thus, to fulfill the aspirations of a growing population and provide futuristic public infrastructure, development authorities need to focus on the following points: