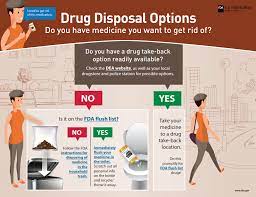 How to Dispose of Old Medications Safely

According to the Drug Enforcement Administration, between one-quarter to three-quarters of patients retain unneeded opioids for future use or just misplace them. While the hazards of certain medicines are widely known, having any old prescription around can be dangerous. The most common reason people call the ASPCA Animal Poison Control Center for their pets is accidental drug intake.

Getting rid of drugs, on the other hand, is more involved than simply throwing them away. Federal agencies such as the Drug Enforcement Administration, the Food and Drug
Administration, and the Environmental Protection Agency collaborate to educate the public on how proper disposal can keep children and pets safe, deter misuse, and prevent
pharmaceuticals from entering streams and rivers when they are poured down a drain or
flushed down the toilet.

These are the methods that these authorities and other professionals offer for disposing
of unwanted medications.

Locate a DEA-approved collection site.
Back to the menu Across the country, the DEA maintains over 15,000 permanent consumer drug take-back receptacles. An internet database can help you find one near you. (Some
places, including your local drugstore, may be listed under a different name, so double-check the address.)

The receptacles are huge, mailbox-style containers where you can drop off old medicines in their original bottles with no questions asked. There are restrictions on what you can and cannot deposit: Yes, including pet medication, unused or expired prescription, or over-the- counter medication in pill, capsule, liquid, patch, or ointment form. No illegal drugs (including legal marijuana), needles, syringes, thermometers, and inhalers. Since 2017, Inmar Intelligence, a company that collaborates with the DEA to provide one-third of these drug- collection kiosks, has recovered over 1 million pounds of drugs through the program.

For more than a decade, the DEA has sponsored National Prescription Drug Take Back Day activities at over 4,000 locations across the country, frequently in the parking lots of
hospitals, fire departments, and law enforcement organizations. The drop-offs are
anonymous, and the same collecting restrictions apply as at the kiosks, although vaping
devices are accepted at the take-back events.

After the narcotics are collected at both the permanent and pop-up locations, the unopened bags are shipped to incinerators across the country. The events are usually held on the last Saturdays of April and October, from 10 a.m. to 2 p.m. Visit DEATakeBack.com a few weeks in advance to identify your local site.

With caution, using trash is a possibility.
The EPA advises the following methods to dispose of most medications in your household
trash even though take-back facilities or events are preferable:

Fill prescription bottles with undesirable materials like dirt, cat litter, or used coffee grounds.
Put the mixture in a jar or sealed plastic bag for storage. Put the container in your household garbage after use.
To protect your identity, scratch out any personal information on the prescription label. Then, dispose of or recycle the empty container or bottle.

According to Sirum (Supporting Initiatives to Redistribute Unused Medicine), an
organization that collects and distributes donated drugs, one in four Americans refills refill necessary prescriptions due to cost.

The FDA expressed concern that donated drugs “may not have the same assurances of safety and effectiveness as those products that FDA routinely oversees” in a statement to The Washington Post. Despite this, the majority of states have enacted good Samaritan legislation that enables donated medications to be connected with uninsured individuals who require them.

Furthermore, Sirum’s regulations are stringent: The organization does not take controlled substances, including opioids, and all prescription and over-the-counter gifts from individuals must be undamaged, unopened, and non-refrigerated (which means those amber-colored pharmacy bottles are ineligible). Medications for diabetes, heart disease, or chemotherapy, as well as EpiPens and inhalers, are frequently provided.

According to co-founder Kiah Williams, hundreds of thousands of dollars worth of drugs
have been donated by individuals, even though Sirum receives the majority of its donations from pharmacies and nursing facilities. She notes that once Sirum provides the prescriptions to neighborhood partners, the neighbors check to make sure the packages haven’t been opened or tampered with to ensure their safety. Since 2017, the Georgia-based nonprofit pharmacy Good Pill, a partner of Sirum, has filled more than 600,000 prescriptions for those in need.

In limited cases, flushing is okay
The EPA once recommended flushing expired drugs down the toilet in the 1990s. However, the FDA changed its advice as scientific understanding of the prevalence of medicines in groundwater and surface water improved. Old medications should generally not be flushed down the toilet today, according to the specialists I spoke with. D.C. Water spokesman John Lisle highlights that chemicals from medications might disrupt aquatic life and says, “We have to rely on public education to educate people that the toilet is not a garbage can.

Flushing is still acceptable in a few rare circumstances, though. Twelve opioids and two other prescriptions are on the FDA’s “flush list,” which the government recommends flushing if you can’t get to a take-back site quickly away since they are so dangerous to keep at home and might be fatal if accidentally or purposefully ingested. If your drug falls into this category, the medication label will warn you; examples include Vicodin and fentanyl patches. (A 2017 FDA investigation on the impacts of the medications on this list found that flushing them has few environmental effects.)

Think before you buy and refill
Avoiding the need to purchase prescriptions in the first place is the easiest method to limit the number of useless medications in your home. Consider waiting until you need that medication rather than having a prescription renewed that you might never need or

purchasing over-the-counter medications just in case. Imagine how much more space you’ll have in your medicine cabinet!