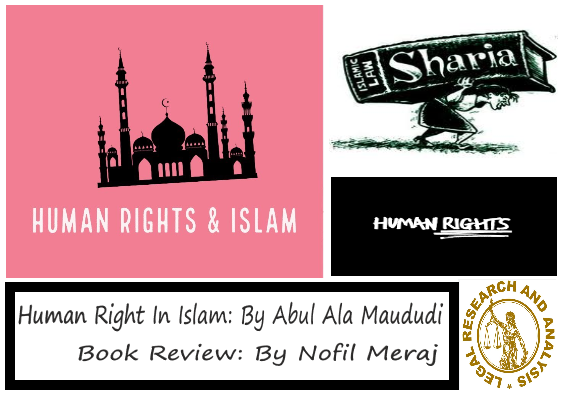 Human Rights is a concept which has been driven years and years ago. But the concept was never specified or coded in a document untill the 17th century. The legal intellectualism of America created a piece of paper with the coded rights such as Trial by Jury, Habeas Corpus, etc. and named it “Magna Carta”. This was hailed as the best day for the rights of humans. Contrary to this the researchers of Islamic Jurisprudence claims that the human rights were derived from the day Adam and Eve were placed on earth. The rights in Islam are based on the concept of Tawheed and the day of Judgement.

Islam has laid down some Universal Fundamental Rights for humanity as a whole said Abul ala Muadudi. According to him, The rule of Khilafah has successfully implemented the human-rights throughout the expansion of its territory. No matter whether it is Rights regarding the Chastity of Women, Rights of sick and injured or the right to have property, Rights of Prisoners or the Law of Wars. Islamic law has worked round a clock on Human Rights. Malcolm X, leader of apartheid after the visit of holy sites of Makkah and Madina said, We have been trying to solve the problem of Racism in different perspectives. The real solution lies within the Islamic way of life. I have seen White praying along with the black. Poor with the Rich in the same cloth eating same food, walking on the same road. The solution to our problems lies there.

Prophet Muhammad(pbuh) said,”No arab has any superiority over a non-arab. Nor does a white man over the black, or a black man over a white. You are all the childrens of Adam, and Adam was created from clay.”(Bayhaqi).There is no difference between the humans, each and every soul has the same respect and there is no difference between them except their geographical identification.

Quran itself claim it that it for the mankind to be on the right path. It is the book to guide you and don’t make you go astray. The modern classification of Human Rights is as per the essentials of Human being. These rights can go further. The basic rights of Humans are :

Right to life – The foremost basic right to live and have respect for human life. The holy Quran lays down, “Whoever kills a human being (without any reason like) manslaughter, or corruption on earth, it is though he has killed whole mankind”.(5:32). “Do not kill a soul which Allah has made sacred except through the due process of law”(6:151). In any case, no human being has any right by itself to take human life in retaliation or for causing mischief on earth. The tradition of the Prophet reads “The greatest sin is to associate some with God and to kill human being”. The life of human is considered sacred and the property of God for which every soul has to answer.

Right against exploitation – Islam has clearly and categorically forbidden the primitive practice of capturing, enslaving and exploiting a free man, to make him slave or to sell him to slavery. The tradition of the Prophet reads “ There are three categories of people against whom I shall myself be a plaintiff on the day of judgement. Of these three, one is he who enslaves a free man, then sells hima nd eats this money”.(Bukhari & Ibn Maja). The words are also general and were not quallifies to any race, caste or tribe. The tradition of Prophet reads “Every limb of the man who manumits a slave will be protected from hell-fire in lieu of the limbs of slave freed by him”.(Bukhari) Islam in its basic teaches every man to respect the life and liberty of other and draws the way to make the environment exploitation free.

Right to Justice – This right is the first and foremost right for the survival of an system of governance. The holy Quran laid down “Do not let your hatred if people incite you to aggression” (5:3). “And do not let ill-will towards any folk incite you so that you swerve from dealing justly; be just that is nearest to heedfulness”(5:8). This makes it clear that Muslim have not be just not only to companions but also to their enemies, no matter from where he belongs. Muslims, therefore can never be unjust to anyone. This must be so that no human being may fear from him injustice from his side and be committed to fairness.

Right to basic necessities of life – Islam has recognised the right of needy people that help and assistance be provided to them. “And in their wealth there is acknowledged bright of the needy and the destitute”.(51:19). This goes not only for the individual citizen but as an obligation to the state too. The prophet said, “The state is the guardian of him who has no one to support him”(Abu Dawud). In short the state has been entrusted with the duty to look after those who need help and assistance. A true Islamic state is therefore a true welfare state which look after all those who are needy and supportless.

Freedom of Speech and Expression – The Islamic Concept of speech an expression is much more superior than the concept of west. Under no circumstance it allows evil and wickedness to be propagated. The right of speech and expression is for the sake of criticism. If evil is perpetrated then it’s an obligation upon a muslim to stop him from doing it. “They enjoin what is proper and forbids what is improper”.(9:71). If any government deprive its citizen of this right, and prevent him from doing his duty, then it is in direct conflict with the injunction of God. The Quran says, “God does not love evil talks in the public unless it is by someone who has been injured there by.(4:148).

Security of life and Property – In his address of farewell hajj, the Prophet said, “Your life and properties are forbidden to one another till you meet your lord on the day of resurrection”. In another tradition Prophet said, “One who kills a man under covenant will not even smell the fragrance of Paradise”(Bukhari). Along with the security of life, the right to security of ownership of Property, as mentioned earlier. The Quran reads, “Do not devour one another’s wealth by false and illegal means”.

Equality before law and among the humans – Islam gives its citizen right to absolute and complete equality in the eye of law. In case of Muslims it is clear by the Quranic verses and the hadiths, it is clear that they all are equal. In the case of non-Muslim Quran say, “if they repent and keep up prayers and pay the welfare due they are your brother in faith”. The rule was well expressed by Calif Ali, “They have accepted our protection only because their lives may be like our lives and their properties like ours”.(Abu Dawud).

The Quran says, “O Mankind, We have created you from a male and female”. In other words, all humans are brother to one another.

Freedom of Association – “Let there be a community among you who will invite you to do good and Command what is proper and forbids from what is improper, those will be prosperous”(3:104). Islam has also given this right to collect into party and organisations to do righteous and virtuous prorogation among the people.

Right to religious freedom – Quran says, “Do not abuse those they appeal to instead of God”(6:108). These instructions are not limited to idols or deities but to the leaders and national heroes. If some people holds certain person in high-esteem which according to you is not deserved by them, it will not be justified in Islam to abuse them and injure their feelings. Islam doesn’t hold person to do debate on religious matters, but it want that it should be conducted indecency. This does not end there. Sayyid Abul ala Maududi in his book also discussed about international law on War, Prisoners, Rights of Combatants & Non-combatants. I recommend this book “Human Rights in Islam” for the researchers and students to go through for the basic knowledge of Islamic law of Human Rights.