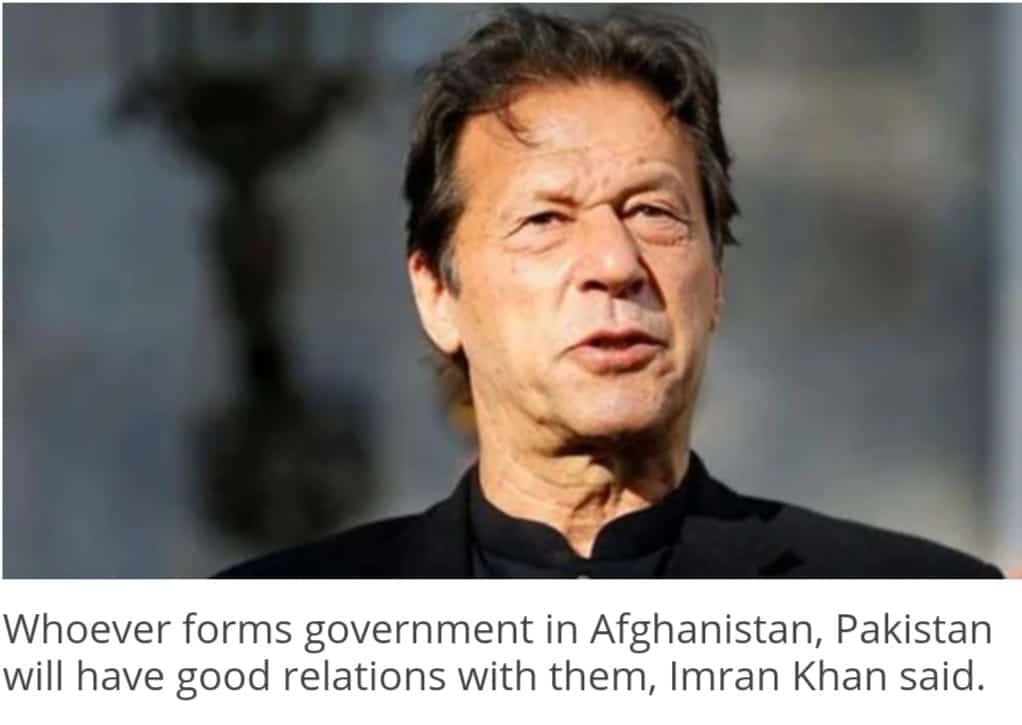 “It’s exactly like what the Americans did in Vietnam. When they failed in Vietnam, they blamed insurgents from Cambodia or Laos,” Imran Khan said adding that Pakistan had nothing to do with the failure of the military solution in Afghanistan.

Whoever forms government in Afghanistan, Pakistan will have good relations with them, Imran Khan said.

Though Afghanistan now has two choices of continuing with the US military, which has been tried and tested for the past 20 years and to form a government with the Taliban, Pakistan Prime Minister Imran Khan said only one choice will lead to the solution. Then he added that Pakistan is not the spokesperson of the Taliban. Khan made these comments while interacting with the representatives of Afghan media that were aired on Thursday, the Dawn reported. A day before, the Pakistan Premier said the Taliban are normal civilians and not some military outfits that his country can hunt down.

“What the Taliban are doing or aren’t doing has nothing to do with us. We are not responsible, neither are we spokespersons for the Taliban,” Imran Khan said adding Pakistan has no interest to fuel civil war in Afghanistan. In his opinion, no one party will be able to take over Afghanistan and so whoever comes to power in Afghanistan, Pakistan will have good relations with them. “What interest could Pakistan have in backing someone to take over Afghanistan? Now, and especially in my government, we believe that Afghanistan can never be controlled from the outside. We have no favorites now,” Imran Khan said.

“Now You have two choices. Twenty years of the military solution has been attempted to bring peace to Afghanistan and that’s failed,” Khan said adding that Afghanistan can continue with the US military if it thinks that it doesn’t want Taliban to be part of the government. “But everyone knows that is not possible anymore. The other choice is a political compromise between Taliban and the government and to form an exclusive government and that is the only solution,” the Pak premier said.

Pakistan had nothing to do with the failure of the Nato troops in Afghanistan. “It’s exactly like what the Americans did in Vietnam. When they failed in Vietnam, they blamed insurgents from Cambodia or Laos.”

A day before, on the question of providing safe haven to the Taliban in Pakistan, Imran Khan in an interview with PBS News Hour said, “There are camps of 500,000 people; there are camps of 100,000 people. And Taliban are not some military outfits, they are normal civilians. And if there are some civilians in these camps, how is Pakistan supposed to hunt these people down? How can you call them sanctuaries?”