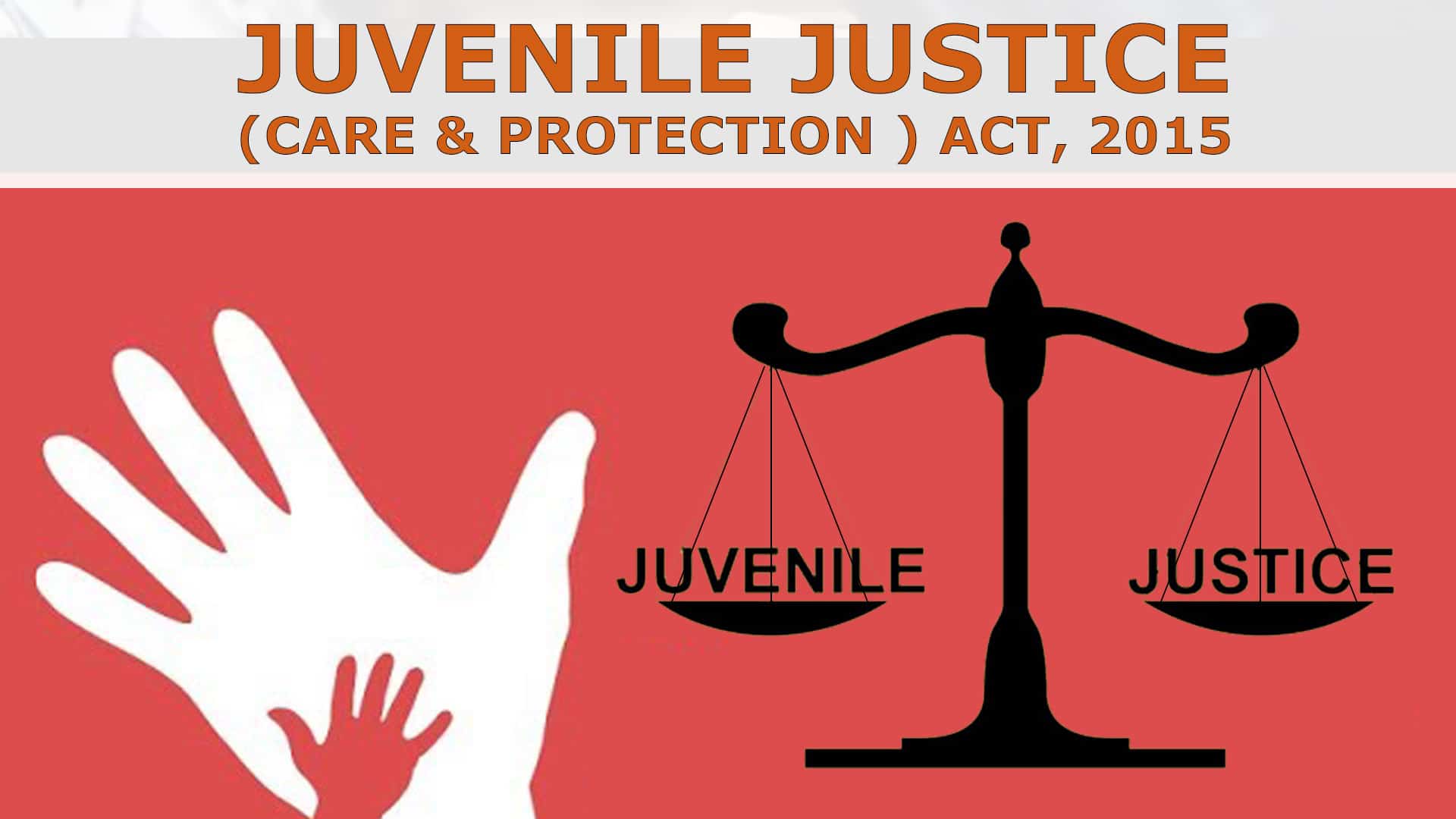 Juvenile Justice (Care and Protection of Children) Act, 2015 has been passed by Parliament of India amidst intense controversy, debate and protest on many of its provisions by Child Rights fraternity.[1] It replaced the Indian juvenile delinquency law, Juvenile Justice (Care and Protection of Children) Act, 2000, and allows for juveniles in conflict with Law in the age group of 16–18, involved in Heinous Offences, to be tried as adults.[2] The Act also sought to create a universally accessible adoption law for India, overtaking the Hindu Adoptions and Maintenance Act (1956) (applicable to Hindus, Buddhists, Jains, and Sikhs) and the Guardians and Wards Act (1890) (applicable to Muslims), though not replacing them. The Act came into force from 15 January 2016.[3]

To streamline adoption procedures for orphan, abandoned and surrendered children, the existing Central Adoption Resource Authority (CARA) has been given the status of a statutory body to enable it to perform its function more effectively. A separate chapter on Adoption provides detailed provisions relating to adoption and punishments for non compliance. Processes have been streamlined with timelines for both in-country and inter-country adoption including declaring a child legally free for adoption.

As of 2019, Ministry of Women & Child Development of Government of India is working towards bringing an amendment, primarily to remove courts from adoption process, to handover it to Executive Magistrates/ District Magistrates and to make Child Welfare Committees administratively and judicially subordinate to District Magistrate, despite nationwide protest against such a move.

The Ministry of Women and Child Development began contemplating several desired amendments in 2011 and a process of consultation with various stake holders was initiated. The Delhi gang rape case in December 2012 had tremendous impact on public perception of the Act. One of the accused in the 2012 Delhi gang rape was a few months younger than 18 years of age and under the Act was tried in a juvenile court.[2] Eight writ petitions alleging the Act and its several provisions to be unconstitutional were heard by the Supreme Court of India, prompting the juvenile court to delay its verdict.[5][6] In the second week of July 2013 the Supreme Court dismissed the objections, holding the Act to be constitutional. Demands for a reduction of the age of juveniles from 18 to 16 years were also turned down by the Supreme Court, when the government of India stated that there is no proposal to reduce the age of a juvenile. On 31 August 2013 the case returned to the juvenile court and a sentence of 3 years in a reform home was handed down.[7][8] The victim’s mother criticized the verdict and said that by not punishing the juvenile the court was encouraging other teenagers to commit similar crimes.[9]

In July 2014, Minister of Women and Child Development, Maneka Gandhi said that they were preparing a new law which will allow 16-year-olds to be tried as adult. She said that 50% of juvenile crimes were committed by teens who thought that they get away with it. She added that changing the law, which will allow them to be tried for murder and rape as adults, would scare them.[10] The bill was introduced in the Parliament by Maneka Gandhi on 12 August 2014.[11] On 22 April 2015, the Cabinet cleared the final version after some changes.[12][13]

A revamped Juvenile Justice Bill was passed in the Lok Sabha on 7 May 2015. The new bill will allow minors in the age group of 16-18 to be tried as adults if they commit heinous crimes. The crime will be examined by the Juvenile Justice Board to ascertain if the crime was committed as a ‘child’ or an ‘adult’.[14][15]

The bill will allow a Juvenile Justice Board, which would include psychologists and social workers, to decide whether a juvenile criminal in the age group of 16–18 should be treated as an adult or not.[2][13] The bill introduced concepts from the Hague Convention on Protection of Children and Cooperation in Respect of Inter-Country Adoption, 1993 which were missing in the previous act.[16] The bill also seeks to make the adoption process of orphaned, abandoned and surrendered children more streamlined.[13]

The bill introduces foster care in India. Families will sign up for foster care and abandoned, orphaned children, or those in conflict with the law will be sent to them. Such families will be monitored and shall receive financial aid from the state. In adoption, disabled children and children who are physically and financially incapable will be given priority. Parents giving up their child for adoption will get 3 months to reconsider, compared to the earlier provision of 1 month.[17]

A person giving alcohol or drugs to a child shall be punished with 7 years imprison and/or ₹100,000 fine. Corporal punishment will be punishable by ₹50,000 or 3 years of imprisonment. A person selling a child will be fined with ₹100,000 and imprisoned for 5 years.[17]

One of the most criticized step in the new JJ Bill 2015 is introduction of “Judicial Waiver System” which allows treatment of juveniles, in certain conditions, in the adult criminal justice system and to punish them as adults. This is for the first time in India’s history that such a provision has been prescribed. Given to the severe criticism, Bill was referred to a Standing Committee of Parliament which also rejected such provisions. Since recommendations of Parliament’s Standing Committee are not binding, Government has moved ahead and introduced the Bill in Lok Sabha, where it stands passed.

Bill is also criticized for prescribing an opaque Age Determination System and its poor draft. There are numerous drafting errors which have been coming to notice after the Bill has been rolled out for implementation on 15 January 2016. Now Government to working on an amendment to sure such errors.

The bill now stands Passed in Rajya-Sabha on Tuesday 22 December 2015, after the Nirbhaya case accused juvenile was released.[18]

During the debate in the Lok Sabha in May 2015, Shashi Tharoor, an INC Member the Parliament (MP), argued that the law was in contradiction with international standards and that most children who break the law come from poor and illiterate families. He said that they should be educated instead of being punished.[2]

Child Rights Activists and Women Rights Activists have called the bill a regressive step and have criticized the Bill. Many experts and activists viewed post December 2012 Delhi Gang Rape responses as creation of media sensationalisation of the issue, and cautioned against any regressive move to disturb the momentum of Juvenile Justice Legislation in the Country. However some sections in the society felt that in view of terrorism and other serious offences, Juvenile Justice Act of 2000 needed to be amended to include punitive approaches in the existing Juvenile Justice Law, which so far is purely rehabilitative and reformative. Some argued that there is no need of tampering with Juvenile Justice Act for putting up effective deterrent against terrorism. Retired Judge of Delhi High Court, Justice RS Sodhi on 8 August 2015 told Hindustan Times, “We are a civilised nation and if we become barbaric by twisting our own laws, then the enemy will succeed in destroying our social structure. We should not allow that but we must condemn this move of sending children to fight their war”