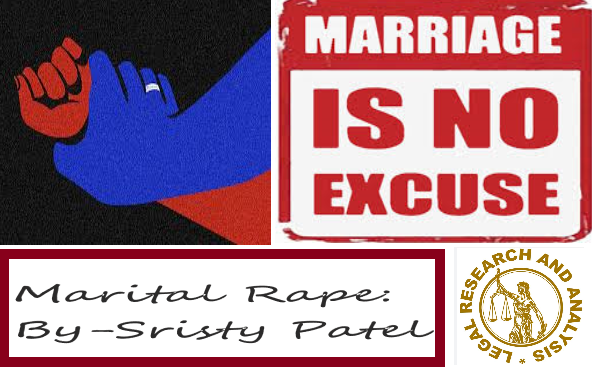 Rape is an illegal intercourse barring assent of a person thanks to the physical pressure or force or due to deceitful demonstration of perpetuator. In India, rape through an outsider is a penal offence under section 375 & 376 of IPC but it doesn’t recognize the concept of marital rape instead marital rape is considered as exception of this section.

Matrimony is a nexus between two person which apparently gives them legitimacy for physical intercourse. But the question arises in this situation is that ‘If implied consent given, at the time of entering into that contractual bond relationship, means the consent for everything that extends till the whole period of life or has any limit when viewed in the aspect of women.’

Marital rape is any unwanted sexual act by a spouse or ex-spouse, committed without consent or against a person’s will, obtained by force, or threat of force, intimidation or when a person is unable to consent. Plainly stating, forced intercourse within marriage is marital rape. It’s the foremost serious violation of a women’s bodily integrity. In India it’s socially accepted practice that a women isn’t entitled to ‘refuse’ or say ‘no’ within the ostensible sacred institution of marriage, ‘no’ is considered to be a taboo in our society and the women are considered as property of the husband. The customary practices bequeath a person an unchallangabe right over a women’s body which sanctions to use violence in cases the demand isn’t met. It’s so believed, rather assumed that a women consents to everything that happens to her within her marriage once she is tied to this institution.

Many countries have adopted marital rape laws, cancel special marital rape cases or laws that don’t recognize material rape cases or laws don’t recognize marital rape & ordinary rape. This shoes that a marital rape is currently considered a violation of human rights. Marital rape was considered as a criminal offence in a minimum of hundred countries in 2006, & India isn’t one amongst them. It considered as a mistake by strategists, although many acts & institutions associated with violent acts against women are passed in Indian families, such as laws against the killing of girls & acts of domestic violence. An Indian wedding rapeseed stands behind the brilliant wedding curtains.

Narendra Modi government’s reactionary stand that criminalising marital rape would “destabilise the convention of marriage”  and will become a straightforward tool to “harass husbands”. In case RIT Foundation V. union of India which is pending before the Delhi High court, is utterly disappointing. The authority seems to have found some bizarre correlation between saving the institution of marriage and not criminalising marital rape. It is recalcitrant to recognize how rape of a female by her companion is any less brutal than triple talaq or polygamy, for which present government seems to concerned about. Such reprehensible behaviour of the centre echoes our intrinsic collective misogyny, which over the days has led to broaden overthrow of women. [1]

The central government has additionally submitted before Delhi high court that there could also be difference of perception between a wife & an individual person within the matter of marital rape, which suggests “what may look as rape to a wife, it’s going to not acquire sight of others”. such arguments structure from the basic structure of criminal law which prescribes the standard of ”reasonableness “ or “reasonable person” as one of its cornerstones. In criminal law, the action or inaction of the accused must be assesse in terms of “reasonableness” or “reasonable person” according to the general perspective of an ordinary person who is representing general community. This type of rules seems to be problematic in case of marital rape as society perceives that in married relationship there’s no need for consent from women, because men have the right over women’s body & constant consent exist in their relationship. In other words, in a patriarchal society, “reasonable person” are always[2] men who judge the position of women in social processes. The fact that women are ultimately considered as baby making machines to forcibly carry out pregnancies is both mind-blowing & ridiculous.

According to the American psychologist Morton Hunt, who is considered as the first man to engage in case of marital rape “Rapist in marriage believe that husbands needs to properly manages his wife which means ruling upon her against her will. He says this applies to sexual problem also. If he want it, then it is her duty to do the same and make him happy. However, they also believe that forcing her wife for sex, give them more sexual pleasure. He insults her and affirms emotionally that he is a ruler and that she is her subject.”

The fact that the law & legal institutions cannot deal with marital rape sets legal boundaries. This shows that the law mainly contributes to the aspirations of the ruling class at the expense of marginalized and disadvantaged. In a society dominated by men, the struggle of women is not limited to existing social structure, but also to institutions that represent the embodiment of neutrality and mental health.

In a survey performed by way of international centre for research on women(2011) nearly 20% of Indian guys pronounced at least once having carried out sexual violence in opposition to a female partner. In some other learn about by national health & family survey (NFHS-4) for the year 2015-16, 5.6% girls have been reported as victims underneath the class of “physically pressured her to have sexual intercourse with him even when she did no longer choose to”

In connection with the Jyoti singh gangrape the legal committee was established in 2012 to strengthen the country’s rape law. The committee urges the exclusion of marriage from marriage in a marriage. “The fact that the accused and the victim are married or in an intimate relationship cannot be considered a mitigating factor in acquitting sentence of rape. The commission added. The committee also highlighted the recommendation  of the CEDAW committee on India in 2007. This included most of the recommendation of the J.S Verma committee, but exclude the widespread definition of “rape” to reflect the reality of sexual violence against women and the exclusion of “rape” to reflect the reality of sexual abuse of cognition of marital rape as a women. The 2013 amendment to the penal code did not propose rape.

In Current judgement  of case Nimeshbhai Bharatbhai Desai V. State of Gujrat (2017)[3]  by Gujrat high court dealt with the issue of marital rape and commented that making marital rape unlawful or an offence will get rid off the adverse attitudes that promotes the marital rape, however due, to non-recognition of marital rape as a crime the Indian legal framework, the court docket held that the husband is liable only for outraging her modesty and unnatural sex. Similarly, the apex court in Independent Thoughts V. Union of Inida[4] has criminalised sexual intercourse with a minor spouse aged between 15 and 18 years, but has refrained from making any statement involving the marital rape of a lady who is above 18 years of age.[5]

The Government of India has passed/ amended many laws to protect women from time to time, to this day India has taken the lead in maintaining and preserving its culture. However, government has failed to pass any such order against the gruesome crimes of husband’s rape. Indian culture takes the position of a married women against the wishes of the married women. But we should not forget that the marriages are complementary to both men and women who are married and same must be balanced, one must not dominate the other one in the name tradition, culture or duty. Women’s right and consent is equally important as of men.

The situation of women were not always like this, in Ancient India women were treated as Godesses. Everything seems incomplete without the presence of women, they were allowed to study, choose partner of their own choice (Swayamwar), But gradually the position of women in the society started to deteriorate and this could be the result of the arrival of British and Muslim Invaders in India. All kinds of norms for women at first were laid down to protect women from Muslim and British invaders but slowly these norms started to curtail the liberty of the women.

Thus, we can conclude that India recognizes marital rape as a crime, but it refuses itself to enact legislation for the same.