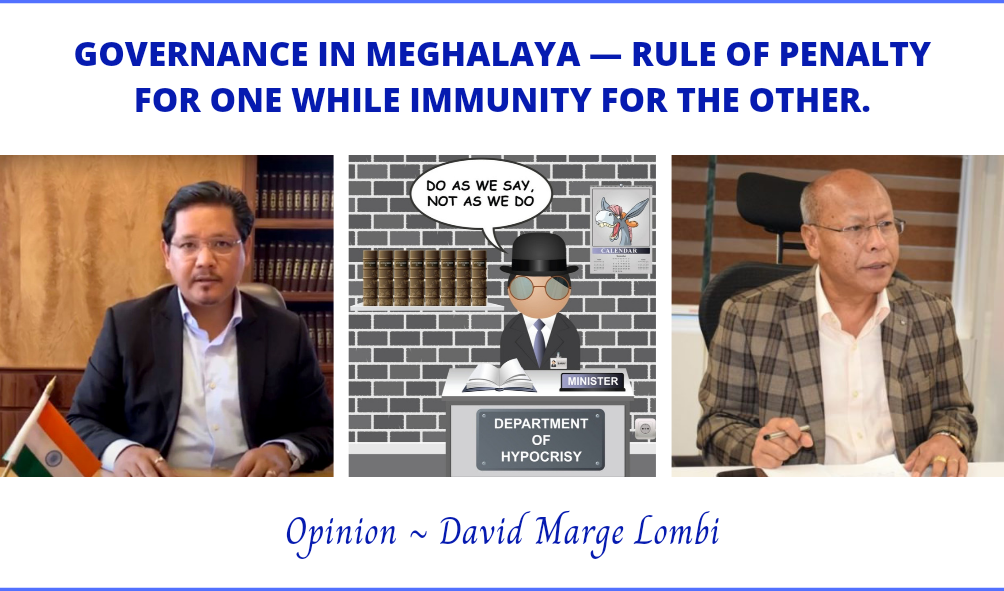 When it comes to adapting the “Rule of Law” in everyday governance, hypocrisy is extreme on the part of the Meghalaya Government. Discussed in this piece are very few examples picked from an ordinary walk of life. The hypocritical acts on the part of the Meghalaya Government shall lead on to infinity if I dive into them, but to do so, my paper is way too limited today.

DISCRIMINATION AT THEIR DISCRETION.

If the riders and the pillion riders of two-wheelers (public) are caught not wearing a helmet, or being unable to produce the required documents, then they shall be immediately charged with a hefty fine by the cops. Further, the drivers of four-wheelers (public) too, if caught violating any of the traffic rules on the street, shall be immediately charged with a hefty fine. While at the same time, the attitude of this same Police department turns into a compassionate and merciful one if they have to deal with other certain classes.

The government-owned buses and the maxi-cabs that run within the city for public service are found overloaded with passengers beyond their capacity. The drivers and handymen operating these vehicles overcharge the passengers to make some extra bucks. Dangerous to public safety is that the drivers and the handymen are often seen mixing alcohol with their duty. Further, in these vehicles open child labor is evident. Boys of age hardly 12 carry out the job of a handyman sometimes.

Surprisingly to date, neither the Police Administration nor the Meghalaya State Transport Department is seen taking cognizance of these menaces on the part of the Government provided services. Now on this note, the traffic rules and the sanction of law ought to be different for each class in Meghalaya — a rule of penalty for one, and a rule of immunity for the other.

AN ORGANISED HYPOCRISY CALLING FOR DEMOCRACY.

Ahead of the Garo Hills Autonomous District Council (GHADC) elections 2021, Conrad K Sangma (Chief Minister) organized massive rallies and gave a rock concert to woo voters ignoring all the COVID-19 protocols. And there is no sanction of law at all upon him, upon his political parties, and the high officials of the State Government.

But the public on the street shall be immediately fined for merely not wearing the mask. The public shall be threatened and are sometimes thrashed by the batons of cops and the Dorbar Shnong (traditional political institution) authorities if caught violating any of the Covid-19 protocols or the curfew protocols.

Amidst the Covid-19 pandemic, the Deputy Commissioner releases an order not allowing any sort of public events. But again this order too ought to be biased. The rock concert of the Chief Minister and events of certain parties are allowed, while certain people/groups are completely barred from doing so.

PARTIALITY OVER EQUALITY, A THREAT TO DEMOCRACY.

Here we get to learn that within this State exists two factions, one part can do away with any sort of liabilities without having to pay any prices, and the other part shall be mercilessly made to entangle with their mere issues with no space for escape.

Now it confirms us the truth that amidst these if anybody is being deprived of his rights and liberties within Meghalaya, then it is none but the ordinary public who vote for and pay taxes to this hypocritical and incompetent government. Today there is a greater threat to Democracy in Meghalaya by such governance than the threat by terrorists and other criminals.

If this is how the Conrad Sangma led Government governs Meghalaya, then they are duty-bound to answer to the citizens — when the authority of law itself begets anarchy, then who shall prosecute and who shall be prosecuted?

A reminder for this government in Meghalaya, in the words of Edward Snowden — “The rule of law doesn’t mean the police are in charge, but that we all answer to the same laws.”