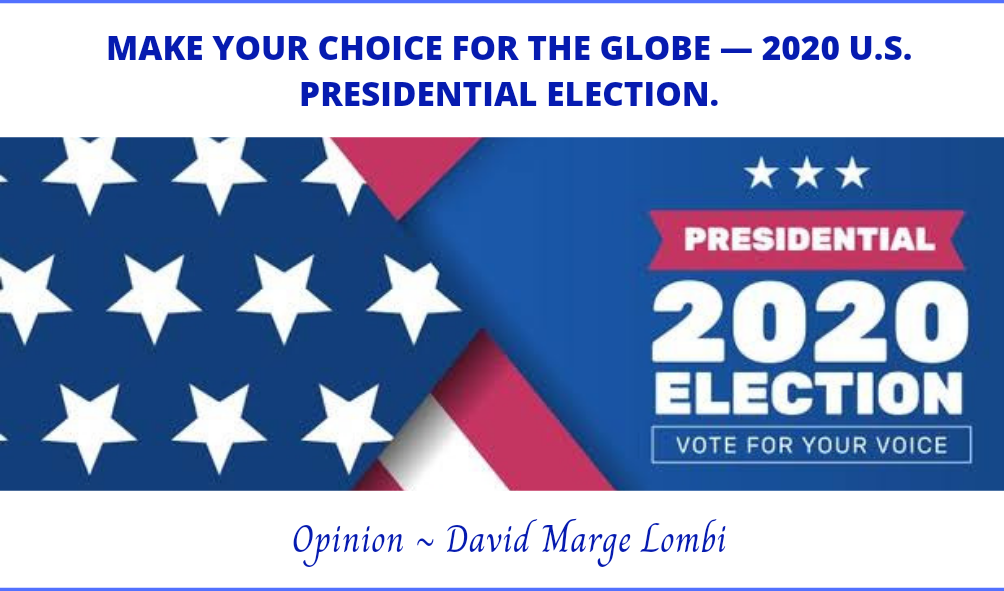 WORLD ON A RACE FOR “WORLD ORDER”.

Today mankind strives for “world peace”. We talk of human rights; we legislate and enact; we build our ambassadors; we drive ourselves with doctrines.

The diplomacy & propaganda of one country has always had their impact on the other, setting the momentum into a completely new direction with a whole new force. This impact may be direct or indirect, but for sure is a definite one.

A global trend has arrived — of maintaining the “check & balance” on the “Great Powers”.

A CRISP REMINDER FOR AMERICA & THE WORLD.

At the 2020 Presidential Election, while Americans surrender themselves to their representative, to be their voice across the globe, they also surrender the fate of the world’s politics. Now, this intersection matters to the rest of the world. This is the interest to achieve a good end for the greater part and not just for America.

To the factions in America who dim Donald Trump fit to be their 46th President, voices are echoing around the globe telling them something. These voices call for a better tomorrow, and for that, urging them to vote out Donald Trump this election.

The world has witnessed the “Rise of Adolf Hitler in Germany (1933)”, “Genocide of the European Jews during World War II (1941–1945)”, “Cold War 1947–1991” and many more such miserable days. Today the regressive history needs not to repeat, but only if global citizens cast the choices that are “Just” and not the persona of “Anarchy”.

THE TRUMP & HIS ENDLESS MESS.

Donald Trump right after occupying the office in 2016, took on to quash every position that America held in the noble covenants at the international platform. All these programs & covenants were centric to the global reformation for good. But at the cost of the global crisis, Trump chose to pull America out of all that he could merely for his self-regard.

→U.S. withdrawal from JCPOA Under Presidency of Donald Trump:  JCPOA, also known as the “Iran nuclear deal”, was an agreement of 2015 concluded with Iran and the P5+1 (China, France, Russia, United Kingdom, United States, + Germany). It provided that Iran’s nuclear activities would be limited in exchange for reduced sanctions. According to the JCPOA, every 90 days the President of the United States would certify on the matters.

Well, this was an agreement during the term of Mr Obama. So no wonder that Mr Trump found no good reason to continue with the same. Mr Trump showed his disaffection by saying it was a mistake and poorly negotiated.

French President Emmanuel Macron warned Trump not to withdraw from the deal and told German magazine, Der Spiegel, that doing so would open Pandora’s box. There could be “war.”[1] Eventually, Trump announced the United States withdrawal from the JCPOA on 8 May 2018.[2] In this regard, various countries, international organizations, and U.S. scholars have expressed regrets & criticized the withdrawal.[3]

→Another withdrawal from the “Paris Agreement”:  The Paris Agreement (under the United Nations Framework Convention on Climate Change) initially agreed by 195 countries was a target to cut the heat-trapping pollution that is causing the climate crisis. This agreement’s official goal is to protect our planet against turning 2 degrees Celsius hotter than before industrialization.

On 4 November 2019, Trump’s administration gave formal notice of intention to withdraw. It takes 12 months for this notice to take effect. So the earliest possible withdrawal date by the United States cannot be before 4 November 2020, which is just one day after the commencement of the 2020 U.S. presidential election (3 November 2021).

To Trump’s decision, reactions from environmentalists, scientists and citizens of the United States were highly negative. The chief executive officer of General Electric fired back at Trump’s irrational decision stating “Climate change is real.”[4]

AMERICA, MAKE YOUR CHOICE FOR THE GLOBE.

At this time the focus is not only on America’s President or the Americans’ Right to make a choice but also on the “Responsibility” that is greater than all of them. Voting is not a mere right, but also a responsibility to cast a “Just” choice. This choice is that one spark that sets high the flame of “Revival-Fire” around the globe.

So America, in this election make your choice for the globe and contribute to the global revolution. Every time that the “Rule of Law” is cornered by the muscles and the money power in any corner of the globe, the global citizens must not let it go compromised.

Achim Steiner said, “Every small action matters because when 7 billion people do that thing, it changes the world.”