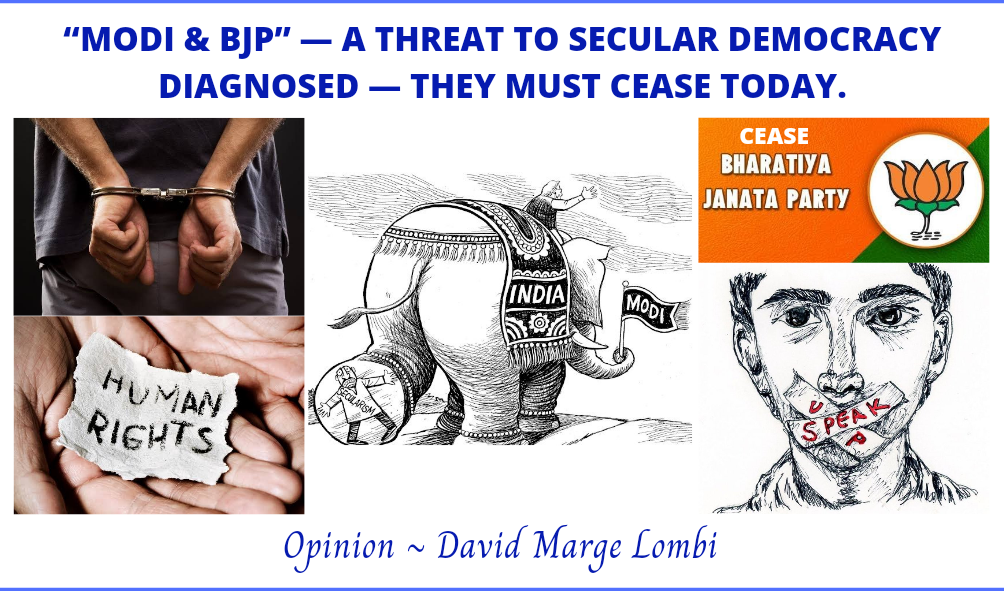 Today BJP will claim like any other monarch their greatest contributions so far. The claim of 99 goods may be true, I don’t vitiate, but they never cried and felt to restore that 1 lost sheep “Secular Democracy”.

Today India is in a state of undeclared emergency. Secular Democracy is under the attack of the BJP.

PATRIOTISM FOR MY COUNTRY IS NOT WHAT I END.

This call is neither a campaign in disguise for or against any political parties, nor is it an expression of contempt towards any hon’ble positions in the country.

Positions as such are of the utmost respect, but the spirit of illegitimacy on the part of the individuals elected to such hon’ble positions, and their taking of granted the votes of the loyal citizens are all that I cumulatively contest against wide-open. The wisdom of the “Rule of Law” that this very land has filled me with, shall keep me restless if I ever remain silent.

THE THIN-SKINNED BJP IS A THREAT TO SECULAR DEMOCRACY.

The threat by the BJP to the fabric of our Constitution has been unveiled before the nation. The lists of infamous decisions on the part of the BJP shall go on to infinity, but my paper is way too limited today.

Today in this era when the globe had recognized “free speech”, “personal liberty”, “freedom of religion” as basic human rights, BJP is still too fond of colonial and draconian laws that were once applied to us and had been left imposed on us by the British-shackles. From the very moment that BJP came into power to run the nation, all the noble essences that India always held have diminished.

From ordinary citizens to the legislature, young students to the journalists, opposition parties to the bureaucrats, all of them are left with the chilling effects. At this date, the people in the country merely have to come to the open streets with a democratic protest against BJP or its choices, and all of them shall be booked as terrorists or anarchists.

The important pillars and principles of democracy today fear to express themselves. There is an imminent fear of arbitrary and malafide prosecution amidst them.

At this date, the entire nation is raising its legitimate plea — “a plea convincing everyone to quash BJP.” Citizens must quash every party in times to come that shall start superseding the citizens’ interests as BJP is evident to be doing today.

India needs to remind every political party and the government in the country — we make them by our votes and pay them by our taxes, so they must either fix these menaces or take back their speeches.

A study released in the year 2018 by the Association for Democratic Reforms (ADR) shows that the ruling Bharatiya Janata Party has the most number of MPs and MLAs with cases of crimes against women. No wonder that the BJP MPs and MLAs topped the chart of criminal cases more than any other political parties in India.

India recorded an increase of 44% in the number of MPs with declared criminal cases in 2019. By the end of the 2019 Lok Sabha term, the number of MPs charged with serious criminal offences has increased in 15 States, five of which have the BJP Government.

UTTAR PRADESH, at the beginning of the term, had 12 MPs with serious criminal cases against them, the highest among all States. And then in 2019, it increased to 21.

LET ME REMIND THE BJP.

In a secular democratic country, where we believe that even the judicial pronouncements can be criticised and that every government institution must be held accountable by the citizens, who is BJP today to be intolerant towards the criticisms levelled by the citizens. BJP must respond to this.

To stifle the voice of the countrymen, this party today avails the archaic weapons left by the British shackles. But let me remind this party that even Britishers themselves had done away with the archaic culture of colonial and draconian laws a very long ago.

Kevin Alfred Strom said, “To determine the true rulers of any society, all you must do is ask yourself this question: Who is it that I am not permitted to criticize?”

One thought on ““MODI & BJP” — A THREAT TO SECULAR DEMOCRACY DIAGNOSED — THEY MUST CEASE TODAY.”