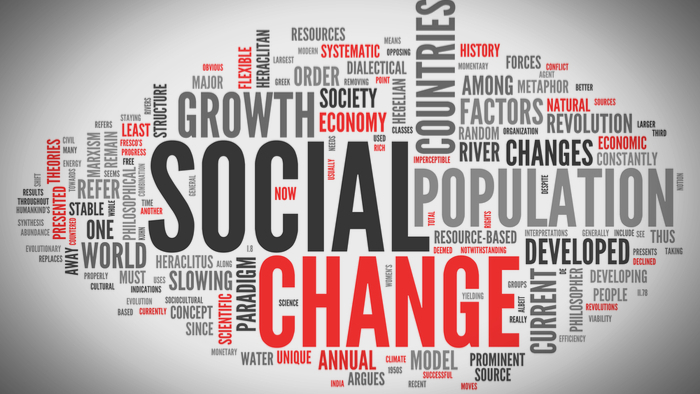 Social change involves alteration of the social order of a society. It may include changes in social institutions, social behaviours or social relations.

Social change may refer to the notion of social progress or sociocultural evolution, the philosophical idea that society moves forward by evolutionary means. It may refer to a paradigmatic change in the socio-economic structure, for instance the transition from feudalism to capitalism, or hypothetical future transition to some form of post-capitalism.

Social Development refers to how people develop social and emotional skills across the lifespan, with particular attention to childhood and adolescence. Healthy social development allows us to form positive relationships with family, friends, teachers, and other people in our lives.[1]

Accordingly, it may also refer to social revolution, such as the Socialist revolution presented in Marxism, or to other social movements, such as Women’s suffrage or the Civil rights movement. Social change may be driven through cultural, religious, economic, scientific or technological forces.

Change comes from two sources. One source is random or unique factors such as climate, weather, or the presence of specific groups of people. Another source is systematic factors. For example, successful development generally has the same requirements, such as a stable and flexible government, enough free and available resources, and a diverse social organization of society. On the whole, social change is usually a combination of systematic factors along with some random or unique factors.[2]

Many theories attempt to explain social change. One view suggests that a theory of change should include elements such as structural aspects of change (like population shifts), processes and mechanisms of social change, and directions of change.[3]

Grant suggests that individuals can have the largest personal impact by focusing on levels 2 and 3.[5][6]

Social changes can vary according to speed and scope and impetus.[7] Some research on the various types of social change focuses on social organizations such as corporations.

Different manifestations of change include:

Gendered patterns of work and care

In much of the developed world, changes from distinct men’s work and women’s work to more gender equal patterns have been economically important since the mid-20th century. Both men and women are considered to be great contributors[16] to social change worldwide.[17]

One thought on “SOCIAL CHANGE”