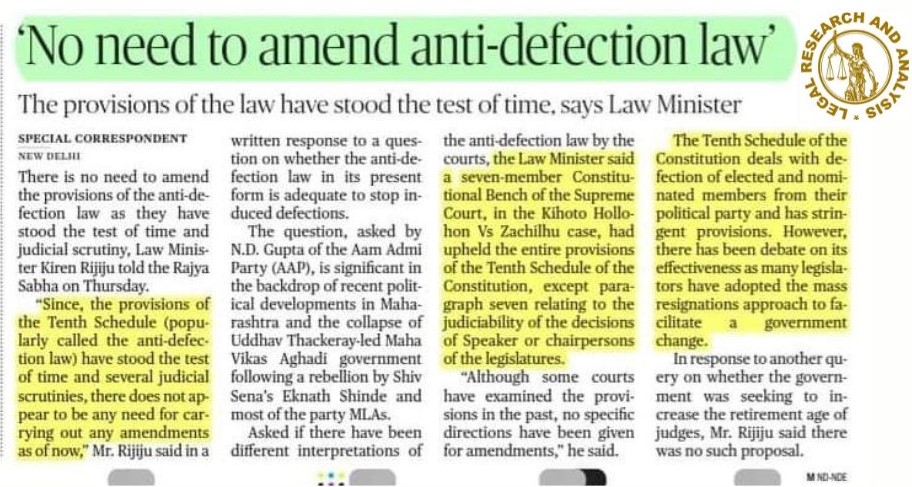 According to the Ministry of Law and Justice, the anti-defection law does not need to be amended because it has “withstood several judicial intense scrutinies.”

The government’s response came in response to a question from Rajya Sabha member Narian Das Gupta, who asked Minister of Law and Justice Kiren Rijiju whether anti-defection legislation in its current form is “sufficient to stop induced defections.”

The minister stated that the constitution’s X-Schedule, which includes an anti-defection law, prevents elected and nominated members from defecting. A seven-member Supreme Court constitutional bench had previously upheld the validity of the entire provisions of the 10th schedule of the constitution (except paragraph 7), which dealt with the ability of the speaker’s decision to disqualify a member.

Gupta also inquired whether the courts had applied different understandings of the anti-defection law. He also asked if the timescale for decisions by the speaker and governor on defections could be described.

The government dismissed any such prospective changes to the law, claiming that it already contains “stringent provisions for mitigating the threat of legislator switching.”

The government’s statement comes midst a hearing by the Supreme Court on the political crisis in Maharastra, where an MLA, Eknath Shinde, has defected along with many other members to support the BJP. During the hearing, the court stated that the anti-defection law “needs to be strengthened.”

What Is Anti-Defection Legislation?

Anti-defection legislation is used to disbar a candidate who was elected on a particular party ticket but later switched sides. It also appears to apply when a member “voluntarily withdraws from the party.”

Courts have repeatedly interpreted the law in a variety of ways, with the Supreme Court holding that “MLA’s conduct can also indicate” their party’s position. There is an exception: if the number of MLAs defecting from a party exceeds two-thirds of the total MLA count, they cannot be disqualified.

Similarly, in Rajasthan, all six BSP MLAs defected to the Congress in 2019. In addition, four of the six Rajya Sabha MPs left the Telegu Desam Party and ended up joining the BJP in 2019.