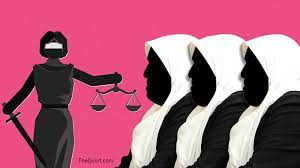 This article focuses principally on the issue “how do Muslim women handle divorce in India the objective of the research is to identify the preference originating via Muslim women while pursuing divorce and to consider the ramification of such resolution. Talaq‘ is an Arabic word, connoting disintegration of marriage when a Muslim man can extreme all conjugal binds with his significant other. Under the Sharia law (Islamic Law), Triple Talaq implies freedom from the ties of marriage quickly by essentially expressing the word ‘Talaq’ threefold. Right now separate is called ‘Triple Talaq’ or ‘Talaq-e-Bidat.’ This is likewise regularly called Oral Talaq. Under the Sharia law that came into act in 1937, the act of Triple Talaq was authorized and gave an exceptional advantage to Muslim spouse over his better half to break the relationship of marriage at whatever point he needed to. This sort of separation is irreversible.

WHAT DOES THE QURAN SAY ABOUT TRIPLE TALAQ ?

There are four primary sources of Muslim law as “The Quran, The sunnah, Ijma, and Qiyas or Hadith”. Primary sources are that originator which is based on religious beliefs mentioned in holy scriptures or books. It is important to cognize that the Quran in itself is not a law book it is a simple manual from which law has to be secured. Even although talaq-i-biddat discover no collocation in the Quran, it evidently has found a durable space in the Indian Muslim community. The message inside the Quran is unimaginably expressed with regards to separate. It inclines more towards protecting marriage instead of dissolving it unexpectedly. The Quran sets specific standards to execute separate, even as there are standards to purify marriage. “The individuals who expect to separate from their spouses will hang tight for four months”. The Islamic sacred writing requests time and persistence in executing a separation in the expectation of proceeding with the association, realizing that the couple will undoubtedly have contrasts..[2]  In the Islamic religion, biddat means that kind of method which is unreasonable, now as the name suggests talaq-i-biddat is the kind of talaq that is not permitted in the Quran it is also known as express or irrevocable. Despite Islamic scholars saying the Quran clearly spells out how to issue a divorce it has to be spread over three months which allow a couple of time for reflection and reconciliation but from centurial now the controversial talaq-i-biddat has been second nature in India with approval from the ministry. Campaigners say advanced machinery has made it effortless for conscienceless men to dump their wives by phone, email, or text there have also been illustrations where men have used WhatsApp, Facebook, and skype for the same. It is important to cognize that the unilateral instantaneous triple talaq finds no description in sharia or the Quran and it`s already banned in 22 Islamic countries, including Pakistan and bangladesh[3]

Of late, there has been a lot of clamor against the act of Triple Talaq by the male populace of Islamic culture. Triple Talaq has been viewed as the strength of men over women. It conflicts with the freedoms of Equality and woman’s strengthening among the Muslim women populace of the country. As well as this method of divorce does not stand with the fundamental morality of sexual equality and justice. This is the reason that a very important question is arises on the status of Muslim women all over the country. The supreme court of India has entitled the triple talaq as unconstitutional in August 2017. And many social, religious, and legal observations have been produced against the practice of triple talaq. Established on the abomination faced by Indian Muslim women and the judgment given by the supreme court, triple talaq has neem inserted in the Indian parliament to void the exercise of triple talaq by Indian Muslim men and a bill was departed in parliament in December 2018. And determinately passed by both the house on 30th July 2019. Starting wit1st August 2019, with the approval of the president of India it has become a law that proclaims that triple talaq given in the form of verbal, oral, written, and digital or any form of them deemed to be illegal or invalid and consider as a void ab initio. Excluding, the permit declaration of talaq as a cognizable and non-bailable offense. Nevertheless, when it comes to allowance or maintenance, a Muslim woman is also entitled to seek allowance from her husband for herself and for her dependent children. Like every coin has deuce sides triple talaq bill also has some positive and some negative overview.[4]

❖ Many women are distressed because of the unfair practice customarily, habitually when the wife is given instant talaq by her batter half than ordinarily she and her children were not designated money to live. she will be neglected alone without any allowance or money. this law protects women and minimizes such occurrences. With the help of this law, every Muslim woman how has suffered due to instant divorce and her dependent children can be entitled to obtain maintenance allowance from her husband.

❖ After making this law cases of triple talaq have significantly diminished.

❖ Formerly creating the amendments, the Indian government did not confer the All India Muslim Personal  Law Board. This organization merely examine all the affair respective to the Muslim denomination in India. this Muslim personal board contends that the law does not display the outgrowth.

❖ If the impeachment is assumed three years imprisonment. He may not supply maintenance allowance to the sufferer and her children.

❖ This bill has a bilateral, In the first place triple talaq, consignment proposes the proper gender equality to all Muslim wives. However, on the different hand, leads to the prosecution of the husband in every and each case registered even though his wife’s blood relative barring her legit consent. There is an opportunity for a false allegation. As the is non-bailable. Muslim guys have been definitely hesitant about the passage of this consignment as it doesn’t simply put them in a tough state of affairs however additionally snatches their protection to liberty and justice.

As indicated by Clause 3 in Chapter 2 of the Bill, “any profession of talaq by an individual upon his better half, by words, either spoken or composed or in electronic structure or in some other way at all, will be void and illicit”.

Clause 3 likewise expresses that, “whoever articulates Triple Talaq upon his significant other will be rebuffed with detainment for a term which might stretch out to three years and fine”.

The Mohd. Ahmad Khan vs. Shah Bano Begum & Ors. or the Shah Bano upkeep case is viewed as one of the milestones in combat for the safety of rights of Muslim women. While the Supreme Court upheld the proper to alimony in the case, the judgment set off political hostilities as nicely as a controversy about the extent to which courts can intervene in Muslim private law. The case laid the floor for Muslim women’s combat for equal rights in things of marriage and divorce in normal courts, the most current instance being the Shayara Bano case in which the Supreme Court invalidated the excise of immediately triple talaq.

Shah Bano case (1985):- The Supreme Court dominated in her favor in 1985 beneath the preservation of wives, children and parents” provision (Section 125) of the All India Criminal Code, which utilized to all citizens irrespective of religion. Further, It endorsed that a uniform civil code is set up.

Facts about the case:
· Under Muslim non-public law, upkeep used to be paid solely until the length of iddat. (three lunar
months-roughly ninety days ).
· Section 125 of CrPC (criminal method code) that utilized to all citizens, supplied for maintenance
of the wife

Judgment:-
1)   The verdict of Shah Bano’s case was once conveyed via C.J, CHANDRACHUD.
2)  All India Muslim Personal Law Board and Jamiat ulema-e-Hind have been the two Muslim Bodies that accompanied the lawsuit as an intervenor.
3)  On 3rdFeb. 1981, Supreme Court gave a like-minded conclusion in this case and banished the plea of Mohd. Ahmad Khan and validate the verdict of the High Court.
4)  The court docket held that Section 125[3]of the Code Of Criminal Procedure solicited to Muslims too, except any sought of discrimination.
5)  Supreme Court in this case duly held that seeing that duty of Muslim husband towards her divorced spouse is restricted to the extent of ” Iddat” duration, even although this state of affairs does now not contemplate the rule of regulation that is cited in Section 125 of CrPc.
6)  According to Supreme Court this rule in accordance to Muslim Law was once in opposition to humanity or was once incorrect due to the fact right here a divorced spouse used to be now not in a circumstance to hold herself.
7)  Thus in the end, after a very lengthy method court docket subsequently concluded that the husband is felony legal responsibility will come to a stop if the divorced spouse is ready to keep herself.
8)  But this state of affairs will be reversed in the case when a spouse is no longer in a position in a circumstance to finance or keep herself after the Iddat period, she will be entitled to acquire upkeep or alimony below  Section 125 of CrPc.[5]

India is a nation of the diversity of human advancement, confidence, and foundation. In India, separately every strict society has its own arrangement not set in stone from their strict text which orders the family issues. Notwithstanding, a fine adjusting must be done between the option to rehearse any religion and civil rights. Endorsement by the parliament of the triple talaq bill is the sensible remnant in giving civil rights to Muslim women. Triple talaq is a separation run-of-the-mill saw by utilizing the Muslim area gives enormous risks toward to increment and improvement of the women society. Unfortunately, the triple talaq guideline has presently not met the assumption as it is currently cited to be hurried and imprudent Even so it helps the women of our general public to remain uninhibitedly excepting being overseen through their better half any longer, the key legitimate to sex correspondence seems to have been grabbed away from Muslim guys. This provocation of grown-up guys would lead right away toward the estrangement from their own personal local area. The guideline must hence be changed considering each sex’s equivalent according to law. whatever be the choice, the entire society anticipates presently not just the boycott of triple talaq but additionally having the right law.