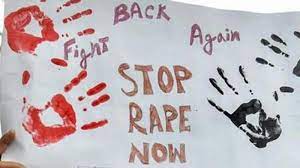 Four minors among 8 held for Dalit woman’s rape in Tamil Nadu
The accused include two local functionaries of the ruling Dravida Munnetra Kazhagam (DMK) party and four minors studying in classes 9,11 and 12, said a police officer familiar with the case.
The arrests and detentions were made on Monday based on a complaint filed by the victim on Sunday.

The arrests and detentions were made on Monday based on a complaint filed by the
Four persons were arrested and four minors detained in Tamil Nadu’s Virudhunagar district on Monday on charges of raping a 22-year-old Dalit woman and threatening her by filming the crime, district police said.

The accused include two local functionaries of the ruling Dravida Munnetra Kazhagam (DMK) party and four minors studying in classes 9,11 and 12, said a police officer familiar with the case.

The arrests and detentions were made on Monday based on a complaint filed by the victim on Sunday.

While the four adults Hariharan, 27, Madasamy, 37, Praveen 22, and Zeenat Ahmed, 24 have been sent to the Srivilliputhur sub-jail, the minors have been produced before a juvenile justice board and sent to a detention center in Ramanathapuram district.

“We were quickly able to track and book all the eight accused,” said the police officer from Virudhunagar Rural police, who declined being named. “The worst part is that school-going boys are involved. It’s not like they were rouges.”

Hariharan, the main accused, was in a relationship with the woman and he allegedly filmed their private moments, police said. He then circulated the videos among the other accused, who then allegedly raped the woman over several months since last year by threatening to make the videos public.

“The victim is living with her mother. Virudhunagar police said in a statement that Hariharan had filmed having sex with the 22-year-old with a promise of marrying her and she continued to persuade him to marry her. When her marriage was fixed with someone else because she refused to marry him, Hariharan began sexually exploiting her and shared the video with his friends. It has been revealed that Hariharan’s friends showed the video to the victim, intimidated her into having sex with them and that Hariharan often harassed the victim,” the statement read.

Virudhunagar police booked the accused on charges of rape under the Scheduled Caste and Scheduled Tribes (Prevention of Atrocities) Act and sections 376 (2) (n) (rigorous imprisonment for rape), 354c, 354d of the Indian Penal Code (IPC), and section 66 (e) of the Information Technology (IT) Act.

“For the investigating police, all of them are accused. Their party affiliations were not known at the time of making their arrests and it will not make any difference to the investigations,” said a senior official in Virudhunagar district who did not wish to be named. “Police are also probing if this is an isolated crime or if there is a bigger network and more victims behind this.”

“Shocked and saddened to learn about the gang rape of a 22-year-old woman in Virudhunagar by a group of men by allegedly blackmailing her over a video. What is more shocking is the involvement of a local DMK functionary in this shameful act with impunity,” Annamalai tweeted. “Arresting these criminals is one thing but equally important is to improve the overall policing under DMK Government, which at present is not giving the common people any confidence.”

It was good that the accused had been arrested, DMK parliamentarian K Kanimozhi said. “Those involved, whoever they are, should be punished,” Kanimozhi tweeted.

In 2019, a similar case had surfaced in the state, when several young women were befriended by a group of men on social media. The women were then sexually assaulted in cars and in abandoned homes, and filmed. The case shook the state and several functionaries of the then ruling All India Anna Dravida Munnetra Kazhagam party were named in the case, which is still under investigation.