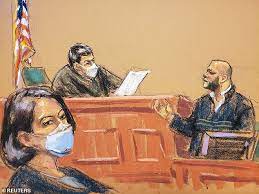 A US judge has upheld Ghislaine Maxwell’s sex trafficking conviction, denying her bid for a new trial.

Maxwell, 60, had complained that one of the jurors falsely stated before the trial that he had never been sexually abused.

Her lawyers argued the fact the juror had been abused in the past meant he could not be impartial.

She faces up to 65 years in prison, but maintains her innocence. Epstein killed himself in prison in 2019 while awaiting trial on sex trafficking charges.

The juror in question was earlier given immunity from prosecution. He had asked to be identified by his first and middle names, Scotty David.

When asked why he failed to disclose his past in the jury questionnaire when explicitly asked, he said it was an “inadvertent mistake”.

“This is one of the biggest mistakes I have made in my life,” he added, saying he “flew through” the document and was “super-distracted” by everything going on around him in the jury room.

On Friday, US Circuit Judge Alison Nathan said the juror had testified truthfully at a hearing in March over Maxwell’s bid for a retrial.

“His failure to disclose his prior sexual abuse during the jury selection process was highly unfortunate, but not deliberate,” the judge said.

“The court further concludes that Juror 50 harboured no bias toward the defendant and could serve as a fair and impartial juror.”