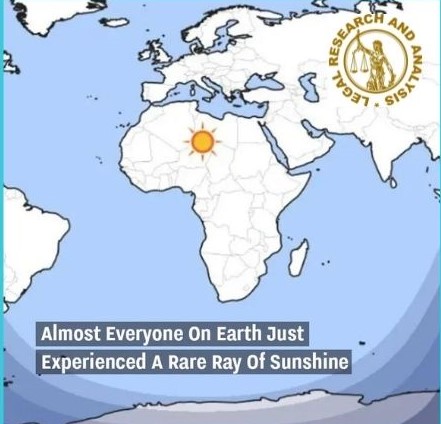 While you’re savoring this gorgeously sunny Friday, which is about to transmit the UK into a major warm spell today (8 July), you’ll be relieved to know that you were presumably soaking up the rays with almost everyone else on the planet.

This morning, at precisely 11.15 a.m., an estimated 7.7 billion people were on the side of the planet caused by the sun – between dawn and dusk.

The stances of the sun and moon at any particular time can be seen on a Day and Night World Map.

At 11.15 a.m., the large bulk of the territory is clearly visible on the map. There are several different shades of grey between daylight and night.

During twilight, the sun gradually sinks below the horizon, but there is still some oblique sunlight shining through.

As a result, Australia, New Zealand, parts of Southeast Asia, and Antarctica were the only significant continents to be without sunlight this morning. This equates to 256.8 million people or 3% of the worldwide people.

Tony Pann, the meteorologist for Maryland tv station WBAL-TV, told his Twitter followers this week: “Once a year, for a wonderful instance at 7:15 AM EDT on July 8th, 99 percent of the global total will be in the Sun.”

“Approximately 6.4 billion people during the day, with over 1.2 billion experiencing twilights.” That’s awesome!”

While thousands were taken aback by little fact, others were more intent on mocking the Australians.