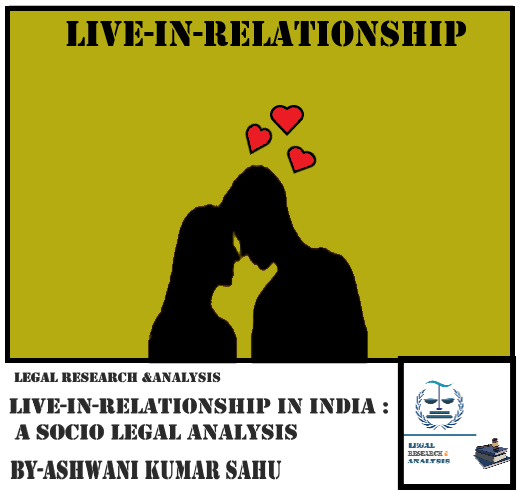 Nothing is constant except change in the material world. In the past few years Indian society has undergone sea change in its living pattern. India is a country of culture and tradition. Marriage of a man and woman is considered the most sacred relationship. However, now-a-days couples are entering into pre-marital sex and live-in relationships. In live-in relationship couples without being married, live together under the same roof. In India, according to marriage laws, relationship between unrelated couple of a male and female is considered to be legal only when marriage has taken place and all other sort of relationships are deemed to be illegal. But, the Supreme Court through judicial pronouncement has included live-in relationship under Article 21 of the Indian Constitution. The Apex court ruled that a man and woman even without getting married can live together if they wish to. This may be regarded as immoral by the society but is not illegal.

In different countries across the world live-in relationship is recognized by statute law such as United States, Scotland, France, Canada, Australia, Ireland, Philippines. But in India such kind of relationship is under criticism and not accepted by society at large as because it lacks legal recognition.

In India, there is no statutory law to envelop the matter of live-in relationship and to address the rights and duties of live-in partners.

Section 125 of Criminal Procedure Code provides for maintenance of wives, children and parents and the same has also been extended to women in live-in relations through Judicial decisions. The National Commission For Women and the Malimath Committee have recommended the Government to make suitable changes in the law to entitle women in live-in relations to get maintenance from her partner if he chooses to dump her. It suggested that the scope of section 125 of the Criminal Procedure Code, under which a wife, legitimate or illegitimate child and parents are entitled to get maintenance from a man, to include woman in live-in relation[1].

It is said that law is a social phenomenon. Since law is a social phenomenon, it has to take note of the changing needs of the people[2]. When the concept of live-in relationship started to be accepted by new generation of Indian society, then it demands for its meaning in the eyes of law. The Hon’ble Supreme Court and the High Courts in catena of decisions have tried to explain the concept of live-in relationship. In S.Khushboo vs. Kanniammal & Anr[3], the Supreme Court held that live-in relationship falls within the ambit of right to life under Article 21 of the Indian Constitution. There is no law that prohibits pre-marital relationships.

In Payal Sharma vs. Superintendent, Nari Niketan[4] the Allahabad High Court opined that a man and a woman even without getting married can live together if they wish to. The apex court in Madan Mohan Singh vs. Rajni Kant[5] held that if a man and woman are living together for a long time as husband and wife though never married, there would be presumption of marriage and their children could not be called illegitimate[6].

Hence, the Court concluded that live-in relationship outside the scope of Common Law Marriage will not amount to a ‘relationship in the nature of marriage’.

The Indian Judiciary through judicial pronouncement has rendered justice to those females who are victim of live-in relationships. As of now, there is no specific legislation governing matters such as succession, maintenance, guardianship, adoption with respect to live-in relationship. By interpretation of the Protection of women from Domestic Violence Act, 2005, the guidelines given by Indian judiciary on different judgments can only be accepted for the term ‘relationship in the nature of marriage’.