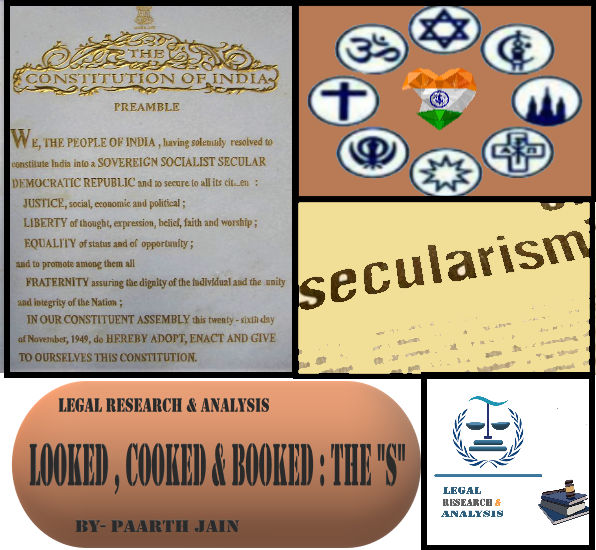 LOOKED, COOKED AND BOOKED: THE “S”

WE, THE PEOPLE OF INDIA, having solemnly resolved to constitute India into a SOVEREIGN SOCIALIST SECULAR DEMOCRATIC REPUBLIC

It is the opening line of the preamble of one of the biggest democracies of the world, is amended by the DICTATOR of the DEMOCRACY in the timeline of June 1975 to April 1977, and the ruler was the democratically elected (not actually, will be discussed later), the then Prime Minister MRS Indira Gandhi.

On the night of 25th June a voice came out saying that; “the President has proclaimed emergency. This is nothing to panic about.” And it had been none aside from the then Prime Minister Mrs. Indira Gandhi, where she declared emergency. And for its proclamation, she mentioned a reason that some people in the country are provoking the army and the police to go against the government. But, the matter was different and was only for retaining her political control. And why it was less about the nation and more about the political control can be understood in the following bullets;

 a silent war was going on between the government and the Supreme Court.

 Cases including the Golaknath[1] case, Kesvananda Bharti[2] case stood the judiciary and the government in a confronting situation.

 the spark the lit the fire was the Raj Narain case[3], which was against Indira Gandhi’s win in the 1971 elections. Claimed to win using malpractices and was alleged to make use of the police and the administration of the promotion.

 the court held Indira Gandhi guilty and was ordered to be disqualified as an MP in Lok Sabha and was barred from contesting elections for the next 6 years.

 the highlight of the JP movement in Bihar, Nav Nirman Andolan in Gujarat, Hartal of railway employees.

Dictator of the Democracy:

All these conditions frightened Indira Gandhi of losing the political control, which she never wanted to, and to end this all, she in a great hurry and fear imposed emergency in the nation. And the then conditions were like;

 All opposition leaders were sent to prison, some succeeded in hiding themselves and some got a successful escape from the nation by the night.

 Electricity was cut down of almost all the media houses so that none could write against them and the EMERGENCY.

 in the whole of dictatorial manner, several ordinances were passed, many amendments were introduced in the constitution.

The  42nd amendment was the major of the emergency.

 Forced sterilization campaigns were started with the vision of population control.

 did the subversion of the judiciary.

 THE words SECULAR and SOCIALIST was added in the preamble.

And it can be said that FREEDOM was not FREE those days.

And now the main reason for the writing is the adding of the word SECULAR in the preamble.

Since we all know that the partition of INDIA and PAKISTAN was based on religion and the main theory behind was the TWO NATION THEORY. During which we opened our gates for everyone who wants to live in.

So we got independence on 15th August 1947 and on the 29th of August 1947 the drafting committee of the constitution was formed whose chairman was DR. B R AMBEDKAR. 2 years, 11 months, and 17 days were spent on writing the INDIAN CONSTITUTION. In this long time, the committee had several debates over the rules, laws, rights, etc.

From those debates, some were on the adding of the word secular in the preamble. And the result was that they decided not to add the word in the preamble. Some of the issues that were raised at that time that was like if the word would get a place in the constitution, then they will not be able to give special place to the minorities based on caste. Along with this, a question was also asked if it is necessary to add the word specifically because they had already provided the right to religion in the constitution which they found enough and satisfactory. However, debates within the Constituent Assembly made clear the anomaly inherent within the terminology when applied within the Indian context. After this, all the members agreed, of course, on the need of building a secular state. Most shared an understanding of history during which the movement for the separation of faith and state was irrevocably a neighbourhood of the project for the democratization of the latter. They understood that since ‘Enlightenment Secularism’, with its core principle of separation, founded on the Protestant conception of faith as essentially a personal concern with which states had no legitimate business, so it had been better to not use the term at all than to use it fraudulently,

While avoiding its inclusion within the Preamble, Ambedkar said[4] “what should be the policy of the State, how the Society should be organized in its social and economic side are matters which must be decided by the people themselves consistently with time and circumstances. It can’t be laid down within the Constitution itself because that’s destroying democracy altogether.”

In place of which, the Constituent Assembly adopted Article 25, 26, and 27 of the Constitution intending to further secularism. Though not formally inserted in the document, secularism was present in the constitutional philosophy.

So by till now, it’s clear that why the assembly didn’t add the actual term, but the discussion never ends, and to let the discussion going I got some questions, they are as follows;

When everything was sorted with the terminology, then what was the urgent need MRS Indira Gandhi felt, adding it in the constitution and even that also during the period of Emergency?

 When our constitution already had the philosophy of SECULARISM then, why did they allow the religions to go forward with their laws, say the HINDU MARRIAGE ACT or THE MUSLIM PERSONAL LAW?

When we were free to choose the religion, and are supposed to respect all the religions then why the religions were kept over the constitution, that they could make their laws?

 Why UNIFORM CIVIL CODE was not introduced earlier, because equality comes with equal law for all.

What can be the image if, after getting influenced by other religions, every religion comes up with a rigid rule book for their particular caste?

And a major one is that, what is the legality of the laws made in the period of emergency, because if we see for democratic structure, nothing was present. The leaders were in prison, no discussion, they were just a kind of declarations passed by the home members.

And if I answer it by myself then the reply could be offensive to many, but my knowledge about politics, rulemaking, and administration leads me to the thought that it was all because of POLITICS and POLITICAL POPULARITY.

In my view, Indira Gandhi added the word just to impress some particular groups, to get the benefit in the elections, and the reasons for allowing the personal laws were that, disallowing their demands could lead to further revolts, which they just avoided by allowing them.

In the end, according to me, there are still several questions that are still unanswered and some of them I think succeeded in asking. But the fact is that these days no political party will be raising questions especially on secularism because the present politics is all around it only, people made political parties based on the particular caste, particular religion and if any6one raises any question over any of the matters then they are called against the constitution of BR AMBEDKAR, this is the present scenario. People make jokes on Hindus, no issue takes place, but if anything speaks about the Muslims then you are the basic structure of the constitution that is secularism. And lastly, in my opinion, only the leaders changed, politics are still the same. And why I chose that headline because while researching it was like people considered it (LOOKED), they tried their best to make it in the best suitable way to them (COOKED), and ultimately the politics and the leaders just made it as a vote bank (BOOKED).