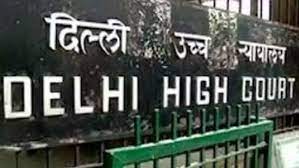 Honorable Delhi High Court has reserved the order tomorrow after completing the hearing of ‘Marital Rape Case‘.
What is the definition of marital rape? What will come under its purview? Now the Center is trying to know the mind of the states on these issues. Solicitor General Tushar Mehta has told the court that the central government has sought their views from the states and union territories with regard to declaring marital rape as an offense.

The central government was asked to clarify its stand
The High Court of Delhi has reserved it for issuing directions after completing the hearing on the public interest litigation to bring marital rape under the category of crime. During the hearing, Solicitor General Tushar Mehta said that the Central Government has expressed its inability to make any stand clear at the moment, but the Center has asked the State Governments to clarify their stand. Only after their reply comes, the central government will tell its answer to the court.

Solicitor General Mehta told the High Court that it is necessary to study the constitutional challenges in this case as well as the impact on social and family life. When a law is challenged, the central government usually makes its stand clear, which is based on the points of objection and the interpretation of the legal provisions. But in this complicated matter related to law, society, family, and constitution, we need to know the views of the state governments. Without this, we don’t want to make our stand and tell. We have written to the Chief Secretaries of the states and the Chairperson of the National Commission for Women to send their arguments, arguments, and suggestions in this matter.

Justice Rajiv Shakdher said that if the legislature wants to give its official intervention in this matter or if the existing law wants to make some changes, then we will have to see that too. We will give you proper time for this. We understand that this is a standoff situation.

During the hearing held earlier, in the case of bringing marital rape as a crime, the Central Government said in the affidavit filed in the High Court of Delhi that the government is fully committed to protecting the rights of women. The Government of India is committed to the full and meaningful defense of the freedom, dignity, and rights of every woman. It is the fundamental pillar of a civilized society.

The Center maintains that both the executive and the legislature are committed to protecting fundamental rights, although a consultative process is necessary. Both the executive and the legislature are equally serious on this subject. Committed to protecting the fundamental rights of its citizens. However, the central government said that this is a well-considered opinion. However, the Court can be assisted only when a consultation process is initiated by the Central Government with all the stakeholders including all the State Governments.

In the matter of bringing marital rape as an offense, the central government told the Delhi High Court, it is ‘reconsidering’ its earlier stand on petitions seeking to criminalize marital rape. That is, preparations are on to take a U-turn.

Justice Rajiv Shakdher, leading the High Court bench, said that the central government needs to take a decision on this issue. The court said that there are only two ways to address the issue of criminalization of marital rape – by the court’s decision or by making a law. If the Center does not clarify its stand, the court will proceed with the affidavit available on record. He said that there is no third way to solve this issue.

The High Court said that the Central Government needs to take a decision on whether you want to stick to your stand mentioned in the counter affidavit or will you change it! Be sure to let us know if you want to change it. On this, representing the government, the ASG urged the court to allow the Center to present its arguments on the petitions next week.

The central government, in its earlier affidavit, had said that marital rape cannot be declared a crime. Because this can put the ‘institution named marriage’ in danger. It can be used to harass husbands. But now the government is working on many dimensions related to this issue.