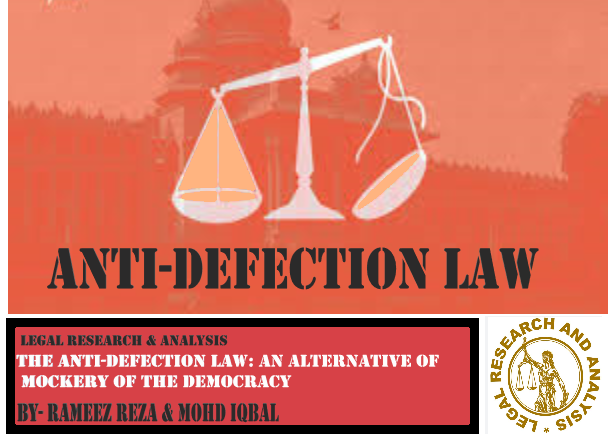 The Anti-Defection Law: An alternative of Mockery of the Democracy

As India is one of the largest democracy in the world, having also the biggest youth oriented country but while going through level of the society. You will observe; this as much is personified in the global face, is as much unstable & scattered government too. Country like India enjoys representative democracy where people surrender their will & rights, elect representatives who are supposed to act on their behalf of interest while making or amending laws for that specified society. As a result, what do we get? The only thing in the name of development is the defection of a legislator where he or she changes his allegiance to the other party only for some monetary benefits or other forms of greed or post in that party or government.  As a representative takes oaths while taking space while joining any political party, he never thought about his responsibilities that he had been chosen or elected for. There may arise more questions like this but who cares about all that? Though Defection isn’t today’s problem, it has been the problem of all the times especially around the 1960s. In the beginning, the rise of coalition politics or government increased the incidence of defection for the sake of some sorts of post whether it may be ministerial or else. This reached an extreme position, when Gaya Lal, a legislator from Haryana changed his allegiance thrice in a single day. The infamous “Aaya Ram, Gaya Ram”[1] slogan was coined against the background of continuous defections in 1967. Since then, to till date it’s been a disastrous loophole for society. So finally, we got a new law, The Anti-Defection law, 1985[2] or 10th Schedule added to the constitution by 52nd Constitutional Amendment Act.

Why we needed the ADL:

As we are discussing right now, why we needed such a law after three decades of post-independence or what were issues then might be. So in furtherance, here are the reasonable reasons behind the act or call as the primary intentions;

In view of all this, and to tackle this rampant of political defection in 1967, the then prime minister Indira Gandhi formed a new committee under the chairmanship of  Y.B Chauhan[3]. The committee submitted its report in 1968, which led to the first attempt to make a new Anti-Defection Bill in parliament. Later, in 1984, after securing a clean majority, Rajiv Gandhi proposed the new Anti-Defection Bill in the house. Finally after marathon debates in both Rajya Sabha & Lok Sabha unanimously approved the bill on 30th & 31st January, 1985. The bill got approval from the president on 15th February, 1985 & at last the act came into effect on 18th March, 1985.

The Anti-Defection Law applies to both Parliament and state assemblies of any state.

Disqualification on ground of defection of a political party, if any:

Exceptions under the law:

Legislators can change their allegiance without the risk of disqualification towards any other party in the following cases:

Meanwhile, the law or 10th schedule challenged at honourable Supreme Court firstly, with argument that this law is ultra vires & also curtails right of freedom of speech & expressionof legislators and  secondly, regarding Judicial Review of the law as it is one of the Basic features of the constitution. As earlier there was no provision of judicial review in such an act or law.

So finally, in Kihoto Hollohan vs Zachillhu (1992)[5] case apex court upheld the validity of the 10th schedule & the decision of presiding officer regarding defection of any legislature shall be subject to judicial review. Once the speaker makes a decision, shall be open to judicial review.

Moreover, once again in 2003 by then prime minister Atal Bihari Vajpayee it was felt needed to amend some clauses of the existing law as there were rising cases regarding merger concept and resignation in the parliament thus, controversy laid the foundation of such amendment again. Finally, by 91st Constitutional Amendment Act, 2003 parliament extended some provision which are followed:

In addition to all that one, there was another argument & case regarding Who can complain? to the speaker about one’s disqualification. So again in 2003, in case Speaker, Odisha legislative assembly vs Utkal Kesri Parida[6], the apex court held that;

“Any legislator alone no but, any voter who has locus standi to file a complaint seeking disqualification.”

Issues or challenges of the ADL:

So, sometimes legislators can’t vote independently as the law prevents them from doing so.

Steps to be taken or Solutions:

Due to the same, recently as always in Manipur, Karnataka, Madhya Pardes faced lots of problems or delay regarding disqualification of the defected MPs or MLAs, and also have been seen as speakers belonging to the ruling party or from the party who are dominant in the house.

In this regard, some scholars also have suggested that if one resigns, he should not be allowed to enter the house for the remaining term of the house.

So, The party should listen to the opinions of the members & should have discussion on the same. Doing this, would promote intra-party democracy while having full freedom of speech & expression.

On the whole , The Anti-Defection law still needs to be amended as there is a dire demand to reform the law. Going through its all aspect whether constitutionally or through that plea which have been challenged the law from the very initial to till date, though Supreme Court also once regarding case of a legislator’s rights, by a majority of judgement held that “Sometimes unprincipled  & unscrupulous political defections are to be contained & the legislators’ freedom of speech and expression can be responsibly curtailed for the larger interest of the nation”. The members who fought and won their elections under the banner, programme & policy of that particular political party, are not supposed to change their allegiance in a mid way of a tenure .

On the other hand a few things more here, is on which parliament should rethink once again, are following in detail:

In this regard, The 170th Law Commission[9] also suggested the same things as aforesaid.

At last, some of the pioneer scholars, political scientists & constitutionalists also have suggested through times the same sorts of things.

Firstly, For a big full fledged political party, it’s tough to break them by any external power but,

Secondly, for a party having a small number of members or legislators it is very easy to break them. So, in this regard it has also been suggested that merger should not be allowed.

Considering all of the above, we can say it’s all which still seeks to be amended in such a law otherwise, as always in spite of the presence of such law here the mockery of the democracy will continue.