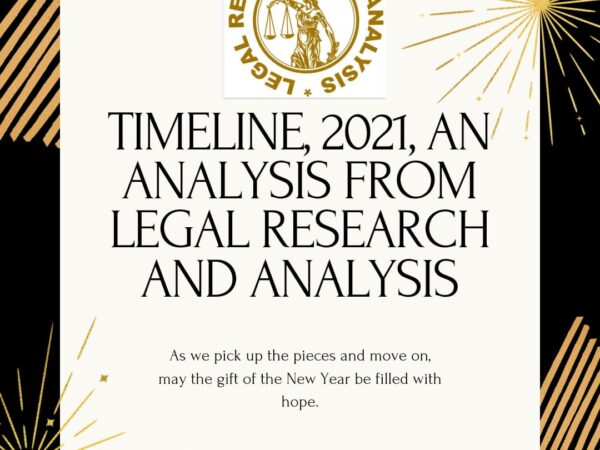 2021, has been quite a year of ups and downs, our columnist @mirani-sankalplra has Precisely picked the most important developments you might want to revisit have a look- HAPPY NEW YEAR!! LOVE AND PEACE FROM LEGAL RESEARCH AND ANALYSIS!!

2. When Afghanistan fell to the Taliban in August, Trump picked up on a claim circulating on right-wing social media and gave it wide circulation — that the United States left behind $85 billion of weapons during the chaotic withdrawal. As usual, we determined that Trump’s statement was poppycock. The $85 billion number reflects all spending appropriated for Afghanistan Security Forces since the U.S. invasion in 2001. But even that is high; a smaller figure, $75 billion, actually had been disbursed.

Moreover, a 2017 government report estimated that about 29 percent of the funds spent on the Afghan security forces between 2005 and 2016 went to equipment and transportation. In theory, that means as much as $24 billion of equipment was given to the Afghans. But given the passage of time, some of this equipment may be obsolete or have been destroyed — or soon may not be usable, given the shortage of maintenance crews. (Note: This was the most popular article in The Fact Checker’s 14-year history.)

3. Technically not a fact check, this also was one of the biggest hits in the history of The Fact Checker. Our timeline of key events, including important articles, helped readers understand why a theory once dismissed as nonsense — that the coronavirus that killed millions came from a lab in Wuhan, China — had gained new credence among scientists. Shortly after this column appeared, Biden ordered U.S. intelligence agencies to conduct a new review of the evidence. Without China’s full cooperation, however, the truth may never be known.

Many scientists continue to think the most likely explanation is that the virus emerged from nature. In 2020, the Fact Checker produced a video that looked into possible explanations for the origin of the virus; it had more than 2 million views on YouTube.

In the absence of crucial evidence of how the new coronavirus began comes many theories — one is that the virus accidentally escaped from a lab in Wuhan, China. (Sarah Cahlan, Meg Kelly/The Washington Post)

4. A Capitol Hill showdown in May between Sen. Rand Paul (R-Ky.) and Anthony S. Fauci, the director of the National Institute of Allergy and Infectious Diseases, quickly went viral. We used this fact check to help readers understand a growing debate about whether “gain-of-function” research played a role in the coronavirus pandemic. The debate over such experiments predated the pandemic, but it has gained new urgency as scientists investigate the origin of the virus that has killed more than 5 million people around the world.

We ended up giving Two Pinocchios to Paul for his remarks. We concluded that there still are enough questions about the work at the Wuhan lab to warrant further scrutiny, even if a National Institutes of Health connection to possible gain-of-function research appears so far to be elusive.

4. Lauren Boebert’s tall tale about a man’s death that led her to pack heat

5. We’re often interested in the “origin stories” of politicians — regular lines that they use over and over to explain their political motivations. Rep. Lauren Boebert (R-Colo.) arrived in Congress this year after leveraging her fame as the owner of a restaurant, Shooters Grill of Rifle, Colo., where the wait staff often have open-carry firearms as they serve customers.

Over and over, Boebert says she started allowing her staff to carry guns after a man was killed outside her restaurant. But we obtained police and coroner reports that show her story is mainly fiction. Police briefly considered it a possible homicide but quickly concluded that the man died of a drug overdose. She earned Three Pinocchios.

6. In a March speech to the Conservative Political Action Conference, Trump mostly replayed golden oldies from his long list of falsehoods. But in an interview with a Fox News reporter, Trump claimed that he “requested” 10,000 troops to guard the Capitol on Jan. 6 but that House Speaker Nancy Pelosi (D-Calif.) blocked the order. That new claim caught our attention.

Upon inspection, it fell apart as quickly as many of his other statements. Acting defense secretary Christopher Miller said that Trump had assumed 1 million people would gather to hear him speak — in reality, Trump’s Jan. 6 rally attracted only thousands of people — and he tossed out a 10,000 figure as an offhand remark during a meeting on Iran. Miller and other senior Pentagon officials never relayed the 10,000 figure to anyone outside the Defense Department, according to a former U.S. official familiar with the matter. So Pelosi had no request to reject. Trump, as usual, earned Four Pinocchios.

7. Robert Malone, a physician who bills himself as having played a key role in the creation of mRNA vaccines, is a prominent skeptic of the coronavirus vaccines that have been crafted using the technology. Shortly after the Food and Drug Administration fully authorized the Pfizer-BioNTech vaccine, he appeared on a program hosted by Stephen K. Bannon, a one-time Trump adviser, and claimed that the full authorization was a bait-and-switch game played by the FDA. In essence, his argument was that the approved vaccine, Comirnaty, would no longer have liability protections so Pfizer would simply keep distributing in the United States the product that had been authorized for emergency use.

But Malone was wrong — the liability protection for Comirnaty is the same as the vaccine that was previously approved under emergency authorization. Malone quickly conceded his error when we contacted him, so we did not award Pinocchios.

8. In condemning a new Georgia election law that imposed new restrictions on voting, the president made a claim that puzzled us: “It ends voting hours early so working people can’t cast their vote after their shift is over.”

Many listeners might assume he was talking about voting on Election Day. But Election Day hours were not changed. The law did make some changes to early voting. But experts say the net effect of the new early-voting rules was to expand the opportunities to vote for most Georgians, not limit them. Biden earned Four Pinocchios.

8. The repeated claim that Fauci lied to Congress about ‘gain-of-function’ research

9. Readers had been asking for an update of our May fact check of the Fauci-Paul spat (#3 on this list) ever since a top NIH official sent a letter to Congress on Oct. 20 saying that the nongovernmental organization EcoHealth Alliance — which received NIH funding to do the research on the potential for bat-specific pathogens in nature to jump to humans — did not report an experimental finding that indicated a spike in viral growth. Two senators, Ted Cruz (R-Tex.) and Tom Cotton (R-Ark.) cited the NIH letter to assert that Fauci lied to Congress.

But we saw no reason to change the Two Pinocchio rating we awarded Paul — and we gave Two Pinocchios to Cruz and Cotton for spinning the letter as confirming what it does not say. There is a split in the scientific community about what constitutes gain-of-function research. To this day, NIH says this research did not meet the criteria — a stance that is not an outlier in the scientific community.

10. This was one of the strangest conspiracy theories of the year — a viral tweet claimed that on Inauguration Day, “someone in Biden’s earpiece told him to salute the Marines, and Biden just repeated the words ‘salute the Marines,’ because he is so used to just repeating what comes from his earpiece.”

After multiple viewings of the C-SPAN clip, we concluded that Biden did not utter the phrase “Salute the Marines.” Instead, Biden remarked, “Good-looking Marines,” as he passed through the Capitol doors. About six hours after this fact check was published, the tweet and the user account associated with it were removed from Twitter.

Video tweeted on Jan. 21, misrepresents words spoken by President Biden on Jan. 20, in order to push discredited conspiracy theories about his mental fitness.

Jordan tweeted this without being able to offer any evidence to back it up. Instead, public testimony showed Pelosi did not even hear about the request until two days later. Jordan also tried to pin the blame on the House sergeant-at-arms, but testimony shows the Senate sergeant-at-arms also was not keen on the idea. Jordan earned Four Pinocchios.