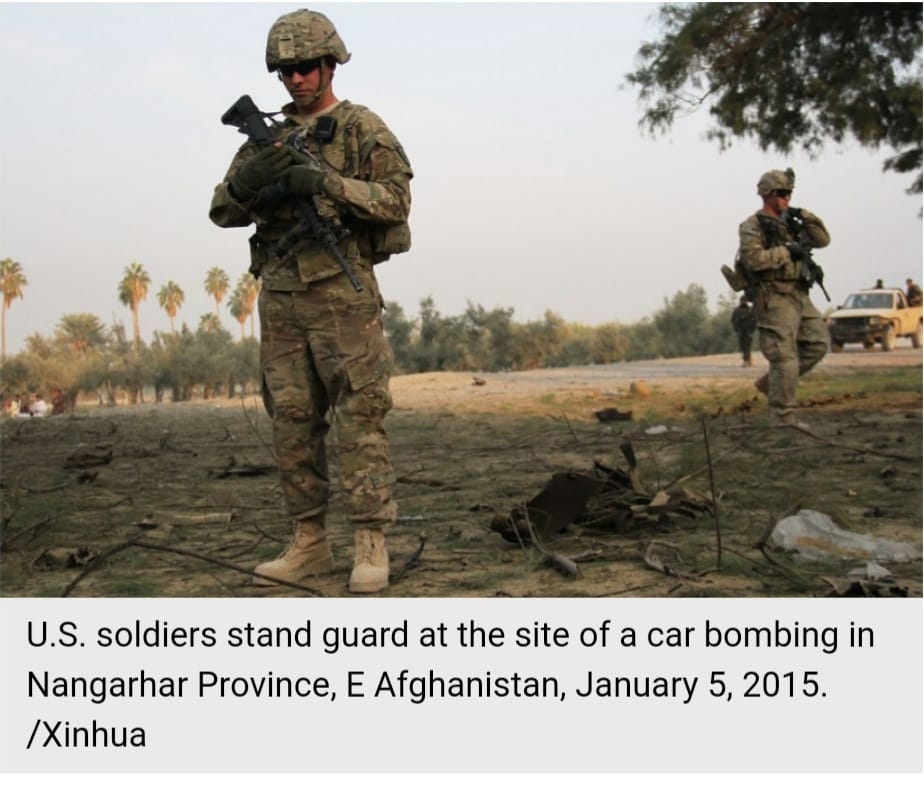 In 2001, the Bush administration launched the Afghanistan War against Osama bin Laden and his al-Qaeda in the name of counterterrorism. Two decades later, the U.S. is pulling its troops out of the country in a precipitous and disgraceful manner, leaving the land with nothing but devastation and desolation. President Joe Biden vows to “heal America,” but meets his Waterloo in Afghanistan. In its breathtaking hubris, the U.S. engineered the latest tragedy in the landlocked Asian country, the outcome of which may plague us for decades.

According to the report, “Human and Budgetary Costs to Date of the U.S. War in Afghanistan” released by Brown University in April 2021, the war in Afghanistan has claimed approximately 174,000 lives so far, including nearly 70,000 Afghan soldiers and police officers and over 47,000 civilians, along with hundreds of thousands of injuries. A third of Afghanistan’s population was forced to take refuge. The war dragged the country into the quagmire of longtime recession and rendered it one of the least developed countries (LDCs) in the world, with more than half of Afghans living below the poverty baseline.

Ironically, the U.S. did not get many benefits from the war. It has spent $2.26 trillion on Afghanistan, only to meet a tragic end with 2,442 American soldiers and 3,846 U.S. contractors being killed.

The U.S. has mastered the craft of achieving its goals by treating others as expendables. Afghanistan is the latest victim.

At the beginning of this century, by exploiting the geopolitical value of Afghanistan, the U.S. sent troops to the already war-torn country to overthrow the Taliban rule, and supported Karzai and Ghani government in an attempt to turn the country into an American-style democracy and a bridgehead to contain China, Russia, and Iran. As the U.S. strategic center of gravity is shifting more rapidly toward the Indo-Pacific, Afghanistan is beginning to lose its geopolitical importance. What has been unfolding recently in Afghanistan shows how easily and quickly the U.S. may turn its back on those who helped it when they’re no longer useful. No wonder Joe Biden conceded that he still would have sought to pull American forces out of Afghanistan even if Donald Trump had not struck a deal with the Taliban last year that paved the way for an eventual U.S. troop withdrawal.

The U.S. has always praised itself as “a city upon a hill” that is an example to others in the way it supports “natural human rights” and fulfills “natural responsibilities,” yet what it has done in Afghanistan clearly betrayed its hollow rhetoric. Its military presence in the country is no better than a mass-killing machine.

In 2010, U.S. soldiers formed the infamous five-man “Kill Team” in Afghanistan, blowing up and shooting Afghan civilians at random just for fun.

In 2012, the notorious killer Robert Bales broke into a village near the U.S. military base in Afghanistan, killing 16 Afghan civilians, most of whom were women and children. Incredibly, he managed to escape the death penalty by reaching a plea deal in his trial.

In the same year, a disgusting video online showed four men dressed in full U.S. Marine combat gear laughing and joking as they were urinating on the dead bodies of Taliban soldiers.

In 2020, the chief prosecutor of the International Criminal Court revealed with credible evidence that nearly a hundred Afghan prisoners were tortured, abused, or raped during the interrogations by U.S. military and intelligence agencies. The notorious Guantanamo Bay Detention Camp, which was built to detain suspects of the 9/11 attacks, is one of the most dreadful examples.

On September 11, 2002, the UN added the East Turkistan Islamic Movement (ETIM) to its list of terrorists. In the press statement, the U.S. Department of the Treasury noted, “we welcome this designation, which comes at the requests of the governments of Afghanistan, Kyrgyzstan, the United States, and China. This is an important step toward greater cooperation in Central Asia against common terrorist threats.”

However, in the last month of the Trump presidency, Washington went against its announcement at the UN by revoking the terrorist designation against ETIM. The decision, according to a State Department spokesperson, came because “for more than a decade, there has been no credible evidence that ETIM continues to exist.”

The truth is, “several hundred ETIM militants are still active in several Afghan provinces,” and ETIM propaganda videos showed the group training with weapons in Badakhshan to demonstrate their readiness to combat, recorded in a UN Security Council report.

With all the warranted evidence from the UN, the U.S. refused to support the Afghan government’s counterterrorism endeavor. While claiming it is committed to combating ISIL, the U.S. besieged it without wiping it out in Nangarhar Province. It even helped covertly transfer ISIL fighters and supplying them with weapons and ammunition.

“Russia has recorded flights of unidentified helicopters delivering weapons to the Taliban and the ISIL units in Afghanistan,” said Russian Foreign Ministry spokeswoman Maria Zakharova at a briefing in August 2018. Without permission from the U.S. military, which was then in total charge of Afghan air traffic, it would have been impossible for these mysterious helicopters to take off within Afghan territories.

With the “support” from the U.S., the number of terrorist groups in Afghanistan has risen to more than 20 from less than 10 in 2001.

Opium is deeply woven into the fabric of the conflict in Afghanistan. Widespread destruction from the war, loss of jobs, and sudden cuts of foreign aid are fueling an economic and humanitarian crisis that leaves many destitute Afghans dependent on the narcotics trade for survival.

In November 2017, the UN Office on Drugs and Crime (UNODC) announced that poppy cultivation had risen more than 120,000 hectares in Afghanistan in a single season. Its opium production surged from around 180 tons in 2001 to more than 3,000 tons a year after the U.S. invasion. It even reached a record high of nearly 10,000 tons in 2020. Today, Afghanistan has become the world’s top poppy grower and opium producer, yielding more than 85 percent of the world’s opium.

The U.S. proclaims to preserve religious freedom in Afghanistan on the one hand while showing total disrespect for Islamic religious and customary practices on the other.

In 2005, an investigative news program “Dateline” broadcast a film showing U.S. soldiers burning the bodies of two Taliban fighters and using their charred and smoking corpses as a taunt to nearby Islamic militants. Their appalling behavior desecrated the Islamic burial tradition which prohibits the cremation of bodies, igniting strong condemnation from across Afghanistan.

In 2012, several members of U.S. armed forces at Bagram airbase burned Islamic books including copies of the Qur’an. Thousands of furious Afghans gathered to protest outside the airbase. At least eight Afghans were shot dead and dozens wounded in clashes.

For a country invading other countries and disregarding local residents’ human rights, it would be all but impossible for the U.S. to keep environmental protection in mind while launching military operations.

Just last month when the U.S. military departed from the Bagram airbase, they destroyed tens of thousands of pieces of equipment containing a large number of dangerous chemicals, polluting and damaging the local soil and water.

The above seven deadly sins do not even cover the whole gamut of the sins the U.S. committed in Afghanistan for the past 20 years. History is the best textbook. What the U.S. did in Afghanistan lays bare its entrenched “America First” mindset and “White Supremacy” complex. “Our mission in Afghanistan was never supposed to have been nation-building,” frankly put by Joe Biden. Wherever the U.S. sets foot, be it Iraq, Syria, or Afghanistan, bloodshed, turmoil, famine, and refugees are always the legacies it leaves behind.

The U.S. failure in Afghanistan points to many lessons we must take a hard look at. It’s time for the U.S. to do some serious soul-searching and atone for the sins it has committed. Countries, developing ones, in particular, should be on high alert against U.S. hegemony, military intervention, and color revolutions in various forms. The tragedy of Afghanistan is a catastrophe that must not be repeated again and again.