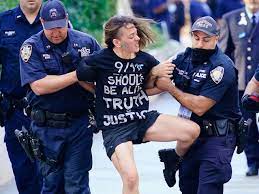 A 9/11 “truther” was ousted on Saturday from the memorial ceremony to mark 20 years since the World Trade Center attacks in New York.

The woman, wearing a t-shirt that appeared to read “9/11 They Should Be Alive Truth and Justice” was escorted from the solemn event by two police officers. The woman also wore a small blue ribbon similar to others attending the ceremony.

9/11 “truthers” claim that the terrorist attacks in September 2001 were an inside job by the US government.

A spokesperson for the Port Authority said the 37-year-old woman, who has not been identified, was taken to Mount Sinai Beth Israel Hospital for evaluation.

The Independent has reached out to the New York Police Department for comment.

On September 11, 2001, around 3,000 people were killed by al-Qaeda hijackers, who seized four passenger planes and flew them into World Trade Center’s Twin Towers, the Pentagon, and a field in Pennsylvania.

President Joe Biden visited all three sites on Saturday and former President George W Bush, commander-in-chief at the time of the attacks, spoke in Shanksville, Pennsylvania where United Flight 93 was brought down by passengers before it could reach its intended target of Washington DC.

“But in their disdain for pluralism, in their disregard for human life, in their determination to defile national symbols, they are children of the same foul spirit. And it is our continuing duty to confront them.”