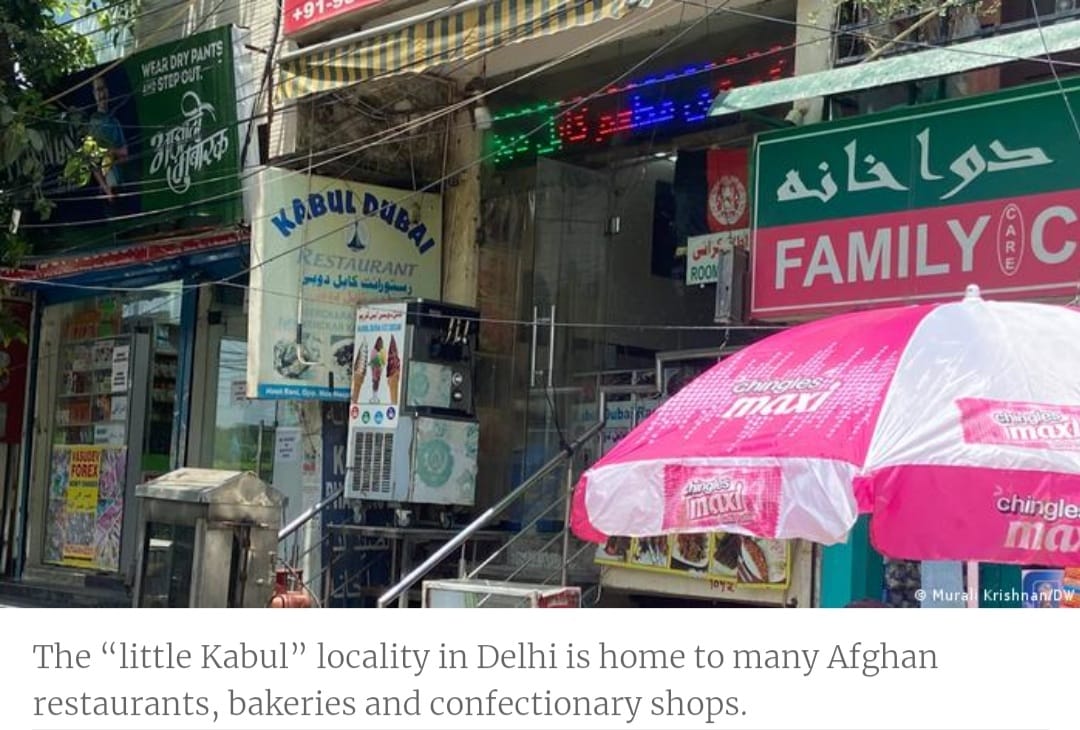 Thousands of Afghan refugees and asylum-seekers in India live in fear and uncertainty as the Taliban intensify their attacks on Afghan government forces and seize more territory in the war-torn country.

Hameed Khan, 28, and his 26-year-old cousin, Sikandar Naseem, have been tuning in to the news regularly to get the latest updates on how the Taliban have been stepping up their campaign to defeat the Afghan government.

Both of them run a hole-in-the-wall restaurant that serves traditional Afghan cuisine and delicacies in one of the congested alleys in southern Delhi, often referred to as “Little Kabul.”

Many Afghan refugees and asylum-seekers live in various neighbourhoods in the Indian capital, and they run restaurants, bakeries, and confectionary shops, among others.

Hundreds of Afghan families have made the neighborhood of Khirki Extension their home over the past few years, after fleeing Afghanistan due to security concerns.

But the latest reports of the Taliban advance have left them scared and worried about their relatives back home.

“It looks scary when we hear such news. I think of my parents who are still there in Panjshir Valley in northeastern Afghanistan. Though it is safe there at the moment, I do not want to watch history repeat itself,” Naseem told DW.

He arrived in Delhi three years ago and was hoping that he could also bring in his parents, which, however, is not possible under the current circumstances.

Building a new life in India

But Hameed Khan remains optimistic and believes that Afghan government troops will stop the Taliban from taking over the country.

“It will not be like in 2000 when the Taliban ruled Afghanistan. But I hope there is enough international pressure to stop the Taliban’s advance,” Khan told DW.

Thousands of Afghan refugees and asylum-seekers, a majority of them belonging to either the Hindu or Sikh faiths that are religious minorities in Afghanistan, have made India their home over the past decade.

According to the United Nations High Commissioner for Refugees, in 2019, there were approximately 40,000 refugees and asylum-seekers registered in India. And Afghans were the second-largest community, comprising 27% of them.

“We fled our war-torn country in search of safety and a better life. In spite of the struggles that come with abandoning our lives and homes, many of us have found small jobs or even opened businesses of their own,” Adila Bashir, who works for a travel agency, told DW.

An uncertain and unsafe future?

The Taliban, fighting to reimpose strict Islamic law after their 2001 ouster by US-led forces, have stepped up their attacks to defeat the US-backed government as foreign forces complete their withdrawal after 20 years of war in Afghanistan.

Over the past few weeks, the insurgents have gained control of at least eight of 14 customs posts along Afghanistan’s borders with Iran, Pakistan, and Turkmenistan.

Reports that the Taliban have taken over 12 districts in Helmand, one of the largest provinces in the south of the country, have some worried.

“We hear reports that the Taliban are imposing harsh restrictions on women in the districts they captured and are even setting fire to schools. It is troubling and a flashback to the bad times,” Wajmah Abdul, a pharmaceutical worker, told DW.

Abdul moved with her brother, Bashir, to Delhi in 2014, but her aunt and uncle still live in Afghanistan.

“I cannot stop worrying about them and the telephone lines have been down for such a long time now. These are very hard times,” said Abdul.

Hopes for settling in the US, Europe dashed

Violence has soared across Afghanistan since early May when the Taliban launched a sweeping offensive across large swaths of the country.

The Taliban seized rural districts at a rapid rate, often without a fight.

But the country’s military has been making preparations to defend a string of provincial capitals scattered across the country — including Lashkar Gah, Kandahar, and Herat.

A record number of civilians have been killed as a result of the conflict in the last six months and the UN blames most of the 1,600 civilian deaths on the Taliban and other anti-government elements.

The fighting has also forced many people to flee their homes and around 300,000 Afghans have been displaced since the start of the year.

“Many of the men in my village have been killed by the Taliban, and several are missing. The way the Taliban are advancing is very frightening and I feel completely helpless,” Idris Hasan, a grocery store dealer in Delhi, who originally comes from Mazar-i-Sharif, told DW.

“I have no way of knowing what’s happening on the ground and I don’t know what to believe. I am constantly living in fear,” Hasan said.

For most Afghans residing in India, the ultimate goal is to resettle in the US or Europe, where they believe there are greater economic opportunities. But given the COVID pandemic, many countries have closed their doors to travel and migration.

“I know my chances of going back to my homeland are dashed completely. All I wish is that my friends and relatives are safe,” Rosana, a student, told DW.

Note: Every article published on this section is extracted from several most genuine authentic sources on our daily life who brings us qualitative LR&A honors the spirit of Journalism of these global giants of News Broadcasting across the globe and outer space, some of them Are, huppost, Aljazeera, New York Times, CNBC, wall street journals, Reuters, google news, Wikipedia, the Hindu, USA Today, Financial Times, Times Magazines, United Nation Journals, BBC, National Geographic, animal planet, History Tv, Fox network etc. Legal research & Analysis recommends all users kindly do read the original contents published by these mainstream media giants, simply click the link of the headline of the post you want to read also share with your friends quality information do not pay attention to unverified sources of News, fake news, news that can cause harm public at large are considered as fake news, LRA promotes the awareness regarding the spreading of fake news, or news without any genuine source of platform, kindly follow the instruction and help community flourished.