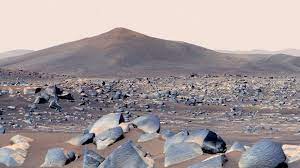 As Nasa Perseverance completes a year on Mars, a look at milestones achieved.
The rover, weighing roughly a ton, touched down in Mars’s Jezero crater last year after travelling almost 300 million miles over seven months.
Nasa’s Perseverance rover has completed a full Earth year on Mars after its successful landing on February 19, 2021. During this period on the Red Planet, the rover has completed many firsts from its ambitious to-do list: collected the first rock cores from another planet; served as a base station for Ingenuity helicopter; extracted oxygen from thin Martian air; and set driving records.

The rover, weighing roughly a ton, touched down in Mars’s Jezero crater last year after travelling almost 300 million miles over seven months. The landing was only the beginning of the first leg of an ambitious mission under which Nasa aims to learn whether life ever existed on Mars. Nasa scientists have identified Jezero Crater as an ancient lakebed, formed billions of years ago. The rover has been sent to collect rocks from the crater and return the samples to Earth on future missions.

The Perseverance rover has so far collected six rock core samples from Mars and two more samples will be collected in the coming weeks. Scientists expect that these rocks could provide a key chronology for the formation of Jezero Crater and the age of the lake that once resided there.

Apart from serving as an indispensable base station for Ingenuity, the first helicopter on Mars, the rover also tested the first prototype oxygen generator on the Red Planet, called MOXIE (Mars Oxygen In-Situ Resource Utilization Experiment).

The Perseverance recently broke a record for the most distance driven by a rover on Mars in a single day by travelling almost 320 meters on February 14. It performed the entire drive using the self-driving software that allows the rover to find its own path around rocks and other obstacles.