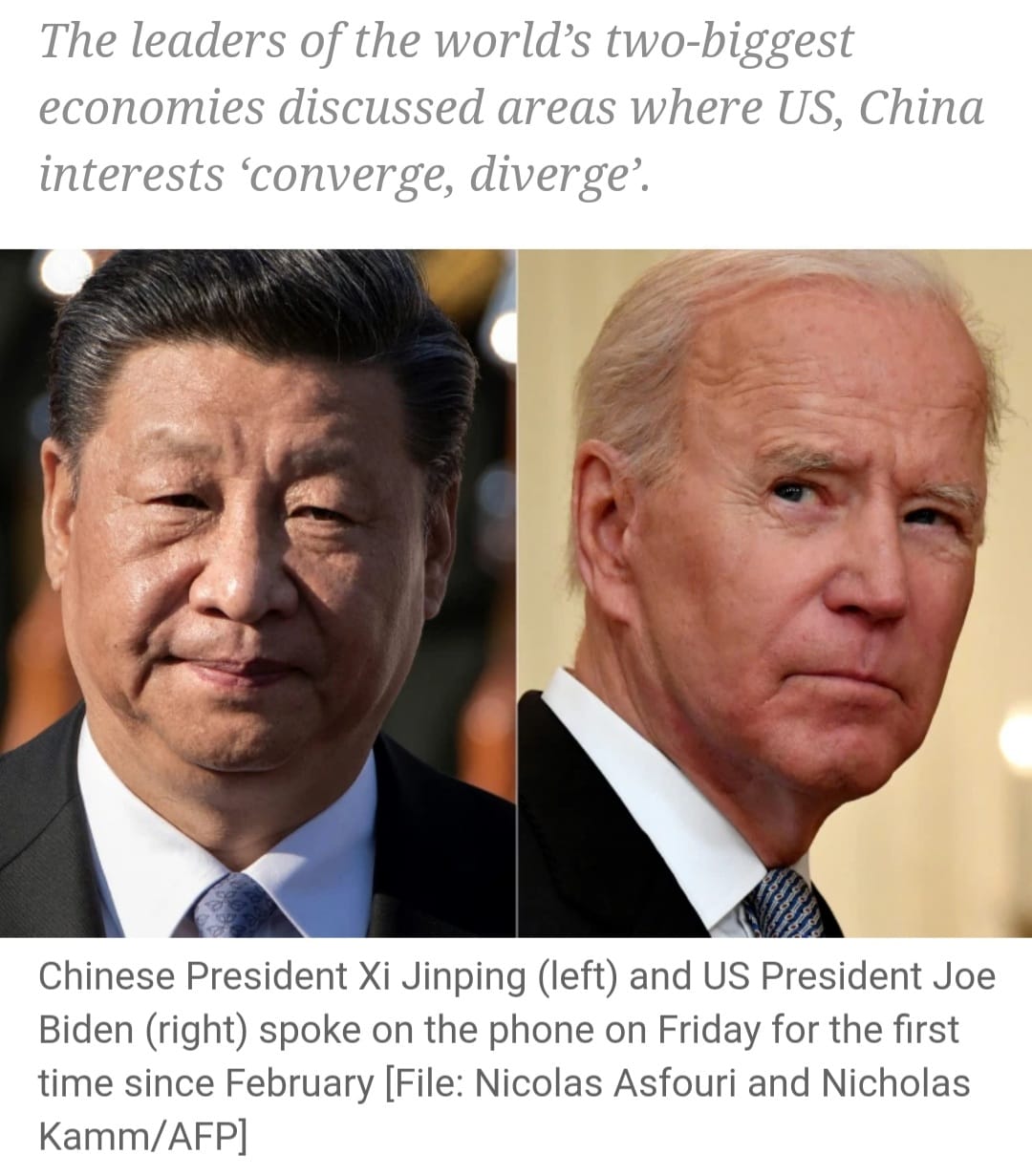 The call was confirmed by the White House and China’s state media, which said the two men spoke early on Friday morning.

The discussion, which lasted about 90 minutes, focused on finding a way forward for the US-China relationship, according to the White House.

Biden initiated the call with Xi, the second one between the two leaders since the US president took office in January. It comes at a moment when the two countries are grappling with growing differences over the origins of the coronavirus pandemic, human rights, and trade but share issues of mutual concern, including climate change.

Later on Friday, White House spokeswoman Jen Psaki confirmed that the US investigation into the origins of COVID-19 was raised during the call.

“They did discuss a range of transnational issues including COVID-19, and understanding its origins is, of course, a primary concern for this administration,” Psaki told reporters.

Chinese state media reported the conversation was “candid” and “in-depth”, adding that President Xi said US policy on China imposes great difficulties on their relationship.

The Chinese report added that both sides agreed to maintain frequent contact.

China’s Ministry of Foreign Affairs spokesperson Zhao Lijian later told reporters the two leaders “agreed to maintain regular contacts through multiple means” and both would work to speed up diplomatic efforts “so as to create favorable conditions for the development of China-US relations”.

Speaking to Al Jazeera, Benjamin Herscovitch, a senior fellow at Australian National University School of Regulation and Global Governance, said the call is a “positive step” ahead of several significant multilateral meetings, including the 76th session of the United Nations General Assembly, an upcoming Asia-Pacific Economic Cooperation (APEC) meeting and the G20 summit in October.

“Even though it’s a good sign, the reality is that the US-China relationship may remain deeply, deeply adversarial across a whole host of fronts,” he said.

“Beijing is intent on making it very clear that things will only happen on Beijing’s terms. This is no longer a case of the United States being the country with overwhelming military might, economic influence, and diplomatic clout that can determine terms,” he said.

Ahead of the call, a senior administration official said the White House has been unsatisfied with early engagements with Beijing.

The official, who was not authorized to comment publicly and spoke on the condition of anonymity, said White House officials were hopeful that Xi hearing directly from Biden could prove beneficial.

The White House official said Biden made clear to Xi that he had no intention of moving away from his administration’s policy of pressing China on human rights and other areas where it believes China is acting outside international norms.

Wang told Kerry, who was visiting Tianjin for climate talks with his Chinese counterparts, by video link that such cooperation could not be separated from the broader relationship and called on the US to take steps to improve their ties, according to the Foreign Ministry.

In July, Deputy Secretary of State Wendy Sherman faced a long list of demands and complaints, including accusations that the US was trying to contain and suppress China’s development. Vice Foreign Minister Xie Feng urged the US “to change its highly misguided mindset and dangerous policy”.

During Friday’s call, Biden’s message was that his administration wants to ensure “that the dynamic remains competitive and that we don’t have any situation in the future where we veer into unintended conflict,” a senior US administration official told reporters.