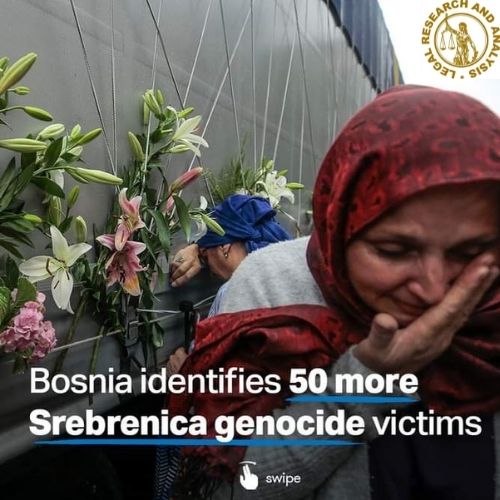 On the 27th anniversary of the 1995 genocide, the remains of 50 more victims of the Srebrenica mass slaughter were sent on Friday for interment in the village of Potocari.

Hundreds of people have gathered in Sarajevo and near the area town of Visoko to say their final goodbyes to the newly discovered victims.

Every year on July 11, newly identified genocide victims are buried in a remembrance cemetery in Potocari, in the country’s east.

A truck carrying coffins draped with a large Bosnia and Herzegovina flag stopped in front of the presidential term near a monument for kids murdered in the Bosnian War between 1992 and 1995 after passing through Vogosca, a Sarajevo suburb.

During Bosnian Serb forces’ brutal siege of Sarajevo in 1995, approximately 1,500 children were massacred. State officials and Sarajevo residents laid flowers and prayed on the vehicles transporting the bodies.

The ceremony was attended by Sefik Dzaferovic, the head of the three-man presidency, Croat Council member Zeljko Komsic, and Turkish Ambassador Sadik Babur Girgin. Dzaferovic told the media that if this event is forgotten, it will happen again.

“We will never forget what happened for the sake of both the survivors and ourselves; we will always recall and respect the victims,” Dzaferovic said.

As the car drove through the roads, there were emotional scenes, with large throngs of people, which include women and children, weeping and saying a prayer for Salim Mustafic, who was 16 years old when he was killed and was the youngest victim buried this year, while Husejin Krdzic, who was 59 when he was killed, was the oldest genocide victim within this year’s identified victims.

Following Monday’s burials in Potocari, the total number of genocide victims buried in the memorial graveyard will rise to 6,721.

Despite the existence of Dutch peacekeeping troops, Bosnian Serb began attacking Srebrenica in July 1995, killing over 8,000 Bosnian Muslim men and boys. Serb forces were attempting to seize land from Bosnian Muslims and Bosnians in order to form a state.

As Serb presence the area, Dutch troops failed to act, killing over 2,000 men and boys on July 11 on its own. Around 15,000 Srebrenica residents fled to the surrounding mountains, but Serb troops hunted down and killed 6,000 more. Victims’ bodies have been discovered in 570 different locations across the country. The International Court of Justice in The Hague governed in 2007 that genocide had occurred in Srebrenica.

On June 8, 2021, UN tribunal judges bolstered a verdict judge sentenced Mladic to life in prison for genocide, oppression, crimes against humanity, annihilation, and other war crimes committed in Bosnia and Herzegovina in a second-instance trial.