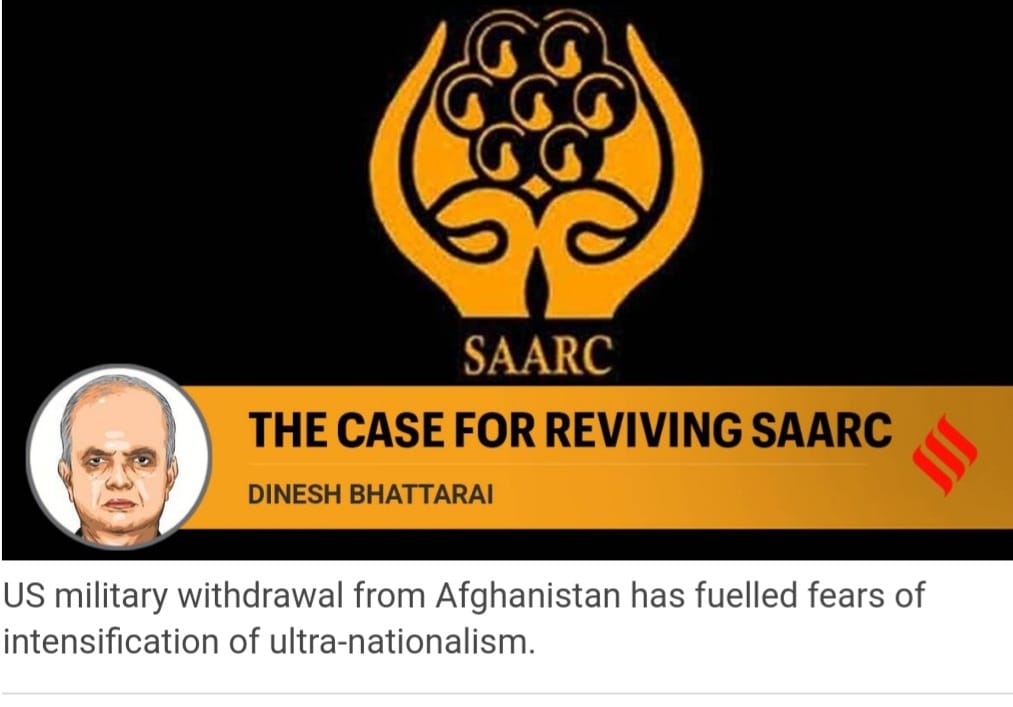 Dinesh Bhattarai writes: The coming together of leaders, even at the height of tensions, in a region laden with congenital suspicions, misunderstandings, and hostility is a significant strength of SAARC that cannot be overlooked

South Asia is the world’s most complex and closely watched region. The region is beset with unsettled territorial disputes, as well as trans-border criminal and subversive activities; it remains a theatre for ethnic, cultural, and religious tensions and rivalries. A current rise in ultra-nationalism is taking place against the backdrop of a bloody history of repeated inter-state wars and myriad intra-state conflicts. Nuclear-armed neighbors India and Pakistan are at loggerheads. Cross-border terrorism has again made the region, as former US President Bill Clinton once deemed it, “the world’s most dangerous place.”

US military withdrawal from Afghanistan has fueled fears of intensification of these trends. General Scott Miller, the longest serving US Commander in Afghanistan, has warned that “civil war is certainly a path that can be visualized if this continues on the trajectory it is on right now. That should be a concern to the world now.” Afghanistan has been a venue for two great wars. The first began in 1979 when Soviet forces invaded Afghanistan. In response, the US made unholy and uneasy alliances — working with Pakistan, Saudi Arabia, and others while backing Afghan Mujahideens against the Soviets. After the Soviets withdrew from Afghanistan in 1988, the US quickly followed suit. The vacuum facilitated the growth of religious fanaticism and the emergence of the Taliban, which made Afghanistan a safe haven for Al Qaeda terrorists.

In the early 21st century, Afghanistan became a staging ground for the 9/11 terrorist attacks against America. In 2001, the US military went into Afghanistan to “disrupt the terrorist base of operations,” and “attack the military capability of the Taliban regime.” Two decades after the US invasion, UN reports suggest that “the Taliban and Al Qaeda remain closely aligned and show no indication of breaking ties.”

Regionalism can be a confidence-building measure to produce a common resolve to navigate common challenges. In 1985, at the height of the Cold War, leaders of South Asian nations — namely Bangladesh, Bhutan, India, Maldives, Nepal, Pakistan, and Sri Lanka — created a regional forum. The South Asian Association for Regional Cooperation (SAARC) was established with the goal of contributing “to mutual trust, understanding and appreciation of one another’s problems.” Afghanistan was admitted as a member in 2007. However, despite the framework SAARC provides for cooperation amongst South Asian nations, it has remained sidelined and dormant since its 18th summit of 2014 in Kathmandu. No alternative capable of bringing together South Asian countries for mutually beneficial diplomacy has emerged.

The third SAARC summit in 1987 adopted a Regional Convention on Suppression of Terrorism and updated it in 2004 with the signing of an additional protocol. These instruments demonstrate the collective commitment to rid the region of terror and promote regional peace, stability, and prosperity.

In March last year, Indian Prime Minister Narendra Modi seized the Covid-19 crisis and utilised SAARC’s seal to convene a video conference of SAARC leaders. They underscored the need for cooperation on a regional basis for fighting the pandemic. If the proceedings had not taken place under the SAARC banner, leaders from the eight countries would not have come together so readily on such short notice. Such capacity to bring member-states together shows the potential power of SAARC.

As the largest regional cooperation organisation, SAARC’s importance in stabilising and effectively transforming the region is becoming increasingly self-evident. Allowing SAARC to become dysfunctional and irrelevant greatly distorts our ability to address the realities and mounting challenges facing SAARC nations. The failure of South Asian nations to act in accord will plunge South Asia into a perilous theatre of discord and escalating tensions with jihadi militias at the forefront, placing the entire region in turmoil. SAARC is needed as institutional scaffolding to allow for the diplomacy and coordination that is needed between member-states in order to adequately address the numerous threats and challenges the region faces.

In 36 years of existence, SAARC has developed a dense network of institutions, linkages, and mechanisms. In the beginning, India suspected it to be a way for smaller neighbours to “gang up” against it. Such concerns have proved to be unfounded. SAARC has made significant contributions to the development of civil society and track-two initiatives. Though SAARC’s charter prohibits bilateral issues at formal forums, SAARC summits provide a unique, informal window — the retreat — for leaders to meet without aides and chart future courses of action. The coming together of leaders, even at the height of tensions, in a region laden with congenital suspicions, misunderstandings, and hostility is a significant strength of SAARC that cannot be overlooked.

SAARC members are among the top troop-contributing countries to UN peacekeeping missions. With the US withdrawal from Afghanistan, a joint peacekeeping force from the SAARC region under the UN aegis could be explored to fill the power vacuum that would otherwise be filled by terrorist and extremist forces.

If the geopolitical dynamics following World War II could allow die-hard enemies France and Germany to interface effectively enough to create the European Union, there is no reason why India and Pakistan cannot come together. SAARC has the capacity to bring nations together. As Nelson Mandela said, “If you want to make peace with your enemy, you have to work with your enemy. Then he becomes your partner.”