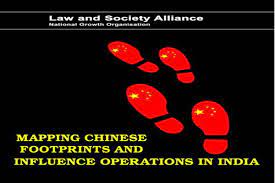 The report which was released over the weekend by the Law and Society Alliance has stated that Chinese influence poses a serious threat to India’s security and democracy.

The report which was released over the weekend by the Law and Society Alliance has stated that Chinese influence poses a serious threat to India’s security and democracy. It covers a vast gamut of topics and has identified key elements and ways in which not only the Chinese intelligence services but also how the Chinese government has well-established itself into different Indian sectors including the entertainment sector and academia.

“It is a combination of financial investments, whether in the entertainment industry, in the socio-political realm through Confucius Institutes, the Chinese government has been using every trick in its playbook to make in-roads into the Indian economy and society. This is being done in order to try and press forward its own selfish narrative and to create discord within the Indian society with regard to China’s actions and motives”, the report states.

The last few years have witnessed China’s repeated efforts to make inroads into the Indian entertainment industry and attempt to influence Bollywood. This was being done through the mechanism of co-production of movies. And it has ensured that its interests are well represented in Bollywood or at the very least not harmed.

It has also tried to control think tanks and civil society.

According to the study, Beijing has attempted and, in some ways, succeeded to make deep in-roads in the Indian intellectual space. It has managed to do so by making generous donations directly or through proxies. And on a regular basis has been facilitating exchange programs among think tanks and university students. Under this program, the students travel to that country at the Chinese government’s expense and inadvertently fall prey to Beijing’s narrative.

One example of Chinese infiltration into India’s educational institutions is how a prominent public management university located in the North-East of India offers a Post Graduate Programme for Executives (Managing Business in India and China) under which students are sent to Chinese Universities.

Its influence within Indian educational institutions using a state-supported social foundation called ‘Confucius Institute’ is just another tool used by the neighboring country to expand its influence here.

It has also used the Indian media and prominent Indian media personalities to influence civil society, and this is the centerpiece of its propaganda tactics.

The Law and Society Alliance report contains many more such examples of Beijing subtly trying to influence the Indian population using social media and mobile applications, including video tools.

Tech-savvy youths in India are routinely turning to mobile apps for day-to-day needs. And the Chinese influence operations have tried to control this sector too, especially through news apps. The top three news apps in India — Dailyhunt, NewsDog, and UC News — have received major investments from Chinese firms to the tune of several millions of US dollars.

India’s tech sector has been influenced by China. Since 2015, the government and firms of that country have invested around USD 7 billion in the Indian tech sector. Coupled with many acquisitions, Chinese companies are major shareholders of a number of India’s biggest tech companies.

Another worrying development that has been aptly highlighted in the report is the powerful reputation that Chinese telecommunication giant, Huawei, shares among Indian business leaders and policy communities.

One of the examples highlighted by the Law and Society Alliance report is how the Communist Party of India-Marxist (CPI-M) has refrained from criticizing or rebuking China.

In summing up, the Law and Society Alliance report has managed to show that China has made significant in-roads into numerous Indian sectors in the past few years.

Global powers such as the US, Canada, and Australia have already recognized this growing trend and concrete steps have been taken to minimize Beijing’s influence on their societies.

Note: Every article published on this section is extracted from several most genuine authentic sources on our daily life which brings us qualitative News reports. LR&A honors the spirit of Journalism of these global giants of News Broadcasting service across the globe and outer space, some of them Are, HUFFPOST, Aljazeera, New York Times, CNBC, wall street journals, Reuters, google news, Wikipedia, the Hindu, USA Today, Financial Times, Times Magazines, United Nation Journals, BBC, National Geographic, animal planet, History Tv, Fox network etc. Legal research & Analysis recommends all users to kindly read the original contents published by these mainstream media giants, simply click the link of the headline of the post you want to read also share with your friends quality information do not pay attention to unverified sources of News, fake news, news that can cause harm public at large are considered as fake news, LRA promotes the awareness regarding the spreading of fake news, or news without any genuine source of platform, kindly follow the instruction and help community flourished.