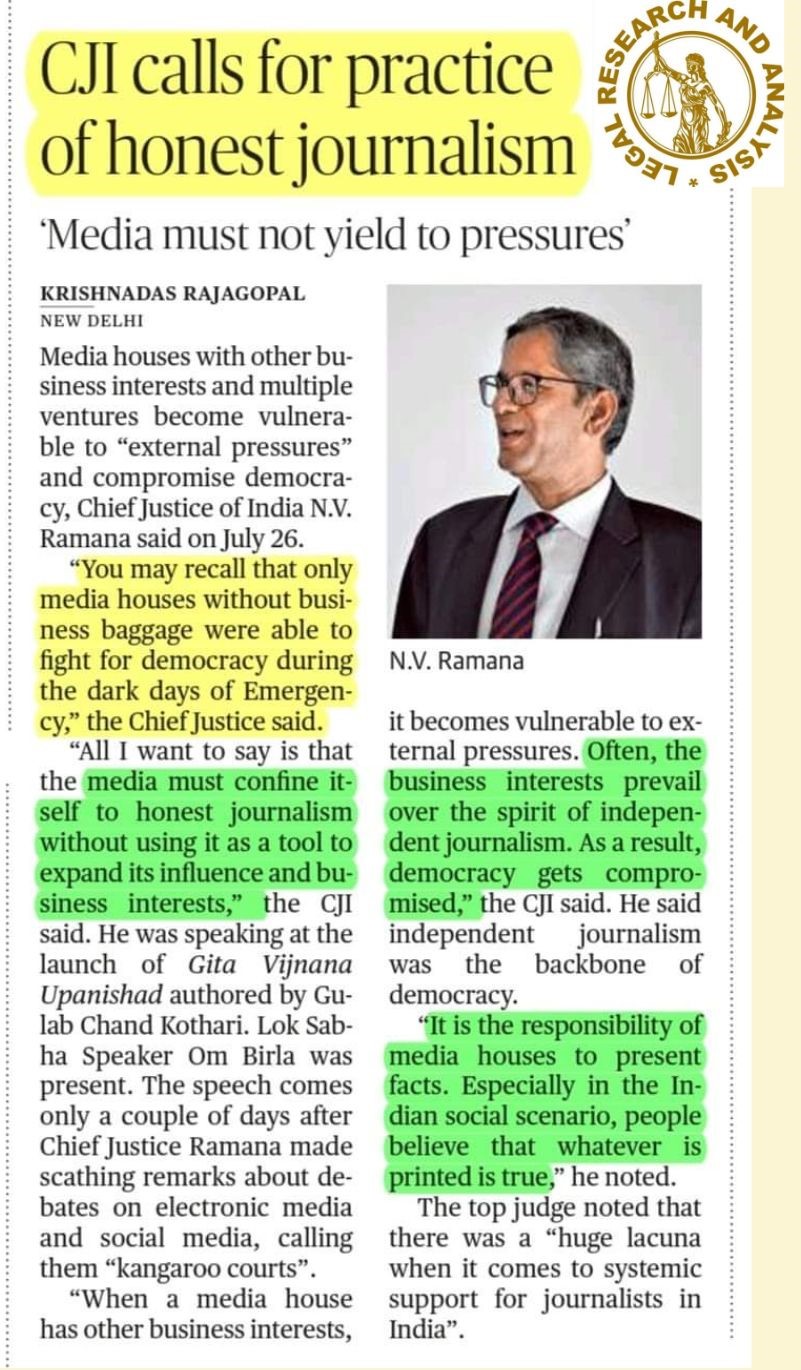 Chief Justice of India (CJI) NV Ramana stated on Tuesday that the media must limit itself to reputable journalism and refrain from using it as a tool to further its influence and commercial interests.

A media outlet having “additional business interests,” according to Ramana, is more susceptible to outside pressures and frequently allows business interests to take precedence over the ethos of independent journalism, endangering democracy.

The CJI, a former journalist, also challenged the stakeholders to evaluate why the standards here are not thought to be good enough even for international recognition and laurels in the area of journalism, asserting that independent media is the “cornerstone of democracy.”

He was speaking at the publication event for The Gita Vijnana Upanishad by Gulab Chand Kothari. Om Birla, Speaker of the Lok Sabha, served as the event’s host.

Similar worries were voiced by the CJI last week, who claimed that media-run “kangaroo courts” and “agenda-driven arguments” were harmful to democracy.

Following the opposition to a ruling earlier this month on former BJP spokesperson Nupur Sharma’s remarks on Prophet Mohammad, which the Supreme Court found had inflamed communal strife across the country, these new statements by Ramana take on weight.

“Media outlets are more susceptible to outside pressures when they have other business interests. Business interests frequently take precedence over the ideals of independent journalism. As a result, democratization is jeopardized, according to Ramana on Tuesday.

The people’s eyes and ears are journalists. Facts must be presented by media organizations. People continue to believe that everything that is printed is real, especially in the social context of India. All I want to say is that the media must stick to truthful reporting and refrain from using it to further its power or commercial goals, he said.

While acknowledging the existence of “journalists who are equally thrilled in today’s media,” the nation’s senior-most judge said it is deeply depressing when a journalist is killed while working on a story.

As he recalled that “only media houses lacking business burden, were able to stand up for democracy during in the dark times of Emergency,” he stressed that the “real nature” of a media house will be evaluated and suitable conclusions taken from their behavior during testing times.

CJI Ramana added that neither a Pulitzer-like prize nor “many Pulitzer-winning journalists” existed in the nation, nor was there any “structural support” for journalists.