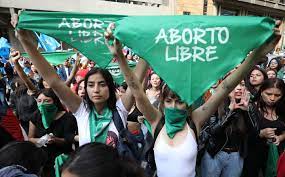 The ruling means women can now seek the procedure in the first 24 weeks of pregnancy without fear of criminal prosecution.

It is estimated that 400,000 abortions are performed each year in the country, with less than 10 percent performed legally. Illegal abortions can be unsafe and cause about 70 deaths a year in Colombia, according to its health ministry.

The ruling by the Constitutional Court – which voted five in favor and four against – has set an “important precedent” for Latin America, according to Catalina Martínez Coral, of the Center for Reproductive Rights.

Colombia is Catholic and socially conservative. As such, the ruling is expected to have a far-reaching impact on sexual health and reproductive rights across the region. It will also allow the government to regulate the process further.

It follows on from similar landmark rulings in Mexico where its Supreme Court decriminalized abortion in September, and Argentina whose Congress legalized the procedure in late 2020.

Erika Guevara-Rosas, Americas director at Amnesty International, called it a “historic victory” and said: “Following the legalization of abortion in Argentina last year and the recent decriminalization in Mexico, this ruling is yet another example of the unstoppable momentum of the green tide in Latin America.”

The Green Wave movement gained prominence a little more than a year ago with legalization in Argentina. Supporters across Mexico, Paraguay, and Brazil wore and waved green handkerchiefs to show their solidarity.

In Colombia, thousands of women took to the streets. “It was very, very powerful,” said Ms. Martínez Coral.

Abortion-rights activists celebrate after the Constitutional Court approved the decriminalization of abortion CREDIT: AP
The Colombian lawsuit was filed by Causa Justa, a coalition of 90 organizations and 134 advocates. It said criminalizing abortion meant women who qualified for the procedure were denied it by health professionals, out of fear of reprisals.

It also said women avoided seeking abortions in legal health centers, were concerned they would be jailed, and instead sought dangerous alternatives in underground clinics.

Amnesty and the Center for Reproductive Rights praised the ruling but said it did not go far enough.

After 24 weeks, legal abortion will continue only in three cases: a risk to the life or health of the pregnant woman; the existence of life-threatening fetal malformations; or when the pregnancy is the result of rape, incest or non-consensual artificial insemination. These three cases were the only way women could access a legal abortion before the ruling.

“No one should ever be criminalized for accessing an abortion,” Ms. Guevara-Rosas said.

The New York Times reported that prosecutors in Colombia open approximately 400 cases each year against women who have abortions or people who help them, with at least 346 people convicted since 2006. Nearly all of these abortion-related investigations have been in rural areas, involving girls as young as 11, according to Causa Justa researchers.

According to Amnesty, almost a third of people reported for clandestine abortions are survivors of domestic violence, sexual violence, or personal injury

“These barriers affect mainly women living in rural and remote areas, low-income women, adolescent girls, women and girls living in situations of armed conflict and victims of gender violence, including physical and sexual violence,” representatives of Causa Justa wrote in a summary of their petition.

Thousands of women have been protesting in front of the court weekly, in the lead up the court’s decision CREDIT: Luisa Gonzalez/Reuters
The ruling puts pressure on anti-abortion holdouts in the region, like El Salvador, Nicaragua, Suriname, the Dominican Republic, and Honduras.

In El Salvador, for example, terminating a pregnancy can result in up to eight years in jail – however, judges are known to find women guilty of the crime of aggravated homicide instead, which can be punished by imprisonment of up to 50 years.

Ms. Martínez Coral said: “We hope this inspires activists in other Latin American countries to fight for decriminalizing and legalizing abortions. Already there have been huge mobilizations in countries like Honduras. We hope even more are inspired by this landmark decision.”

It comes as countries like the United States and Poland have rolled back abortion access. In the United States, the Supreme Court is considering a case that could overrule Roe v. Wade, the 1973 ruling that established a constitutional right to abortion.

In 2020, a controversial court ruling in Poland removed fetal abnormalities as grounds for abortion. They are now only permitted when the pregnancy threatens the mother’s life, or in cases of rape and incest.