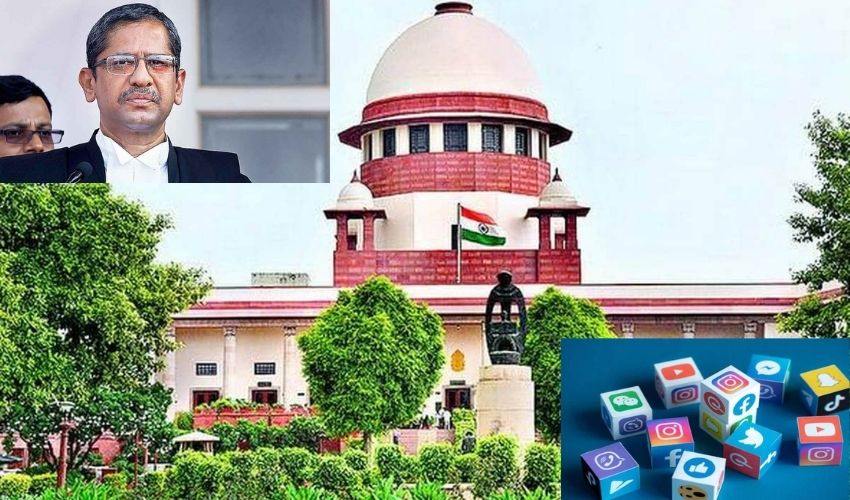 “The problem is, everything in this country is shown with a communal angle by a section of the media. That is the problem. The country is going to get a bad name ultimately,” said Chief Justice NV Ramana.

Web portals “only listen to powerful voices” and “write anything” against judges or institutions, the Supreme Court said in scathing remarks today while hearing a case against media reports on the Tablighi Jamaat gathering last year in Delhi that was blamed for a spike in Covid cases in the first few months of the pandemic. The court also noted that news shown in a section of the media had a communal tone, which, it said, could bring the country a bad name.

“The problem is, everything in this country is shown with a communal angle by a section of the media. That is the problem. The country is going to get a bad name ultimately,” said Chief Justice NV Ramana, questioning the government about the regulatory mechanism for websites and TV channels.

Solicitor General Tushar Mehta, representing the government, added: “Not only communal but also planted stories. These portals can even put fake news.”

The Supreme Court is hearing a petition that requests action against media reports accused of “communal branding of Covid” linked to the Tablighi Jamaat gathering at Markaz Nizamuddin in the capital.

The judges were sharply critical of reporting by websites.

He said the portals had no accountability and “never respond to us”.

The judges commented that there is no control over fake news and slander in portals and YouTube channels. “If you go to YouTube, you will find how fake news is freely circulated and anyone can start a channel on YouTube,” they said.

“I have never come across web portals taking any action,” said Justice Ramana.

“At least the NBSA (National Broadcasting Standards Authority) are responding to responsible people. Respond to us.”

The Jamiat Ulema-i-Hind has asked the court to direct the Centre to stop the dissemination of “fake news” related to the gathering at the Markaz Nizamuddin and take strict action against those responsible for it.

164CommentsThe Supreme Court agreed to hear after six weeks the Centre’s plea seeking the transfer of petitions from various High Courts on new IT rules meant to regulate online content.