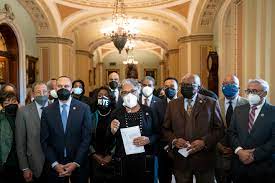 Inside the Congressional Black Caucus’s plan to defend the first Black woman nominated to the Supreme Court.

Less than a week after Justice Stephen G. Breyer announced on Jan. 27 his intention to retire from the Supreme Court, the Congressional Black Caucus set up a “war room” on Capitol Hill for members to strategize and prepare for the moment President Biden announced a Black woman to replace him.

During the week and a half that the House was in session earlier this month, CBC members showed up to meetings in the war room to debate whether the group should put out a list of recommended nominees, how much to engage during the nomination process, and to privately discuss why they supported one candidate over another, according to two aides familiar with the meetings and planning, who like others, spoke on the condition of anonymity to describe the private discussions. The aides declined to say where the war room was located.

An early — and enduring — consensus reached by members was that, regardless of which Black woman was nominated, they would be ready to act “from nomination day to confirmation day” as the nominee’s first line of defense if Republicans or conservative groups tried to discredit the first Black woman nominated to sit on the Supreme Court, according to the aides.

After President Biden announced Friday that he would nominate federal Judge Ketanji Brown Jackson to replace Breyer, Rep. Joyce Beatty (D-Ohio), chair of the CBC, made that point clear in a statement: She pledged that Black lawmakers would remain “laser-focused” on ensuring that Jackson “receives a full and fair hearing before the Senate Judiciary Committee.”

“We are also prepared to combat anyone who may use personal attacks or bigoted language to discredit Judge Jackson,” Beatty said in a statement. “Sadly, we know that Black women in positions of power often face the ugliest forms of racist and sexist attacks. Despite this, in the immortal words of Dr. Martin Luther King, Jr., ‘we shall overcome because the arc of the moral universe is long, but it bends toward justice.’ ”

The effort by Black lawmakers to carefully plan how they will mobilize to both defend and promote the first Black woman ever nominated for the high court underscores the historic nature of Biden’s choice and its importance to these lawmakers and the voters they represent.

“The first Black woman nominated to the Supreme Court is a former public defender. Our first voice on the Court in its 233 years has a career of standing up for those most in need. Say it with me, y’all: Supreme Court Justice Ketanji Brown Jackson,” Rep. Cori Bush (D-Mo.) tweeted Friday.

With the exception of Sens. Cory Booker (D-N.J.) and Raphael G. Warnock (D-Ga.) — both of whom have been “intimately involved” in strategy coordination, according to an aide — none of the CBC members will have a vote when it comes to whether to confirm Jackson. But they are determined to have their voices heard.

When Jackson’s nomination was announced Friday, CBC members expressed a sense of responsibility for ensuring Jackson is treated respectfully during the confirmation process and for highlighting her importance beyond the opinions she will render as a justice.

“She will be a great Justice and a role model to women and girls everywhere, especially little black girls, that in America all things are possible with hard work and determination,” Rep. Sheila Jackson Lee (D-Tex.) said in a statement.

On the day it was reported Breyer was expected to retire, members began to discuss how to make sure that whomever Biden chose did not become politicized. On this day and the ones that followed, CBC members made their opinions clear to one another about whom they would like to nominate, according to aides.

No voice was louder, publicly and privately than Majority Whip James E. Clyburn (D-S.C.), who pushed for Biden to pick J. Michelle Childs, a federal judge in South Carolina. Clyburn argued that while all women under consideration were qualified, Childs made for a more historic pick because she was raised in the South and did not receive an Ivy League education.

A few Black liberal lawmakers were irked by how vocal Clyburn had become, hoping that it did not give the impression that he spoke on behalf of all CBC members, according to two aides to liberal members familiar with the discussions. While they expressed their preference for Jackson during private CBC meetings, they ultimately withheld going public out of concern that Republicans would try to discredit her by associating the judge with the more liberal members of the caucus, these aides said.

It quickly became clear that the caucus would not formally endorse any candidate, but members were free to endorse individually whomever they wanted.

But most Black female lawmakers decided not to publicly advertise their opinions. The issue was personal: Many of them had served as “firsts” in their careers and communities and wanted to avoid pitting potential nominees against each other to make sure Biden’s eventual choice would not be diminished by Democratic infighting.

After members left Washington for a two-week recess on Feb. 9, CBC chiefs of staff, communications directors and caucus staffers spent hours researching the nominees, and brainstormed responses to potential attacks, then wrote talking points to “uplift and amplify the nominee” that were immediately distributed to members Friday morning.

During a “CBCxSCOTUS Strategy Session” for chiefs of staff Wednesday, CBC aides provided examples of how to defend a nominee’s record and how quickly to engage with the most egregious attacks.

“We will also ensure Judge Ketanji Brown is treated fairly in the media. Any dog whistle or bigoted signaling will not be tolerated,” read a talking point, a copy of which was obtained by The Washington Post. An aide said that although the memo mentioned Jackson’s name, it served as a placeholder and not because they had been informed that she would be the nominee.

The staff level preparation played out on the airwaves leading up to Friday’s announcement as CBC members appeared on television and radio to make the argument for why it was time for a Black woman to serve on the Supreme Court.

After Breyer announced his retirement, a handful of Republicans criticized Biden’s stated intention to nominate a Black woman, saying it was “affirmative action” or unfair to other potential nominees.

“The fact that he’s willing to make a promise at the outset, that it must be a Black woman, I got to say that’s offensive. You know, Black women are what, 6 percent of the U.S. population? He’s saying to 94 percent of Americans, ‘I don’t give a damn about you, you are ineligible,’ ” Sen. Ted Cruz (R-Tex.) said on his podcast, “Verdict with Ted Cruz,” on Jan. 31.

Black female lawmakers were quick to respond to these comments, including ones from Sen. Roger Wicker (R-Miss.) that the nominee would be an affirmative action pick.

“This is something I will not allow, will not be quiet, to anyone saying, ‘Oh, my God, we just doing this affirmative action thing. We just got to pull some Black person out. They’re not going to be qualified,’ ” Rep. Brenda Lawrence (D-Mich.) said in an interview earlier this month.

On Friday, many Republican senators offered benign statements about looking forward to meeting with the nominee and reviewing her record, even though very few GOP senators are expected to vote to confirm Jackson.

Others in the party criticized Jackson as too liberal.

Sen. Lindsey O. Graham (R-S.C.), who sits on the Senate Judiciary Committee, blamed “the radical Left” for tarnishing the reputation of Childs, of whom he had spoken highly, as an antilabor champion to win “President Biden over yet again.”

Though Clyburn also wanted to see Biden pick Childs, he criticized Graham for taking such a swipe against Jackson.

“I do not see Judge Brown Jackson as being radical at all. I do not. And, evidently, he was among the three that voted for her confirmation to be on the D.C. Circuit,” Clyburn said. “I think that she is deserving of a strong bipartisan vote, and I hope she gets it.”

A CBC aide said the group was expecting such criticisms, having spent the past month studying critiques previously aimed at the top three nominees, which also included California Supreme Court Justice Leondra Kruger.

On the California Supreme Court, Leondra Kruger is known for her ‘persuasive powers’ among the justices

If Jackson comes under attack, members are encouraged to respond individually and meet the attacks where they are by responding in-person, through statements or via tweets. Staff will also watch how Jackson is discussed in the media, especially among conservative outlets, according to aides.

Starting as soon as next week, the Black women of the CBC will elevate their defense of Jackson by publicly speaking about her nomination, and they plan to charge that Republicans are making baseless attacks against Jackson by portraying her as “radical” and too “leftist” for the court, according to an aide familiar with plans.

“I think we all are aware that some of my Republican colleagues are not above discriminatory smear campaigns when it comes to political issues, but I believe Judge Jackson’s record speaks for itself, and I stand with my colleagues in the CBC who stand and support her,” Rep. Barbara Lee (D-Calif.) said.