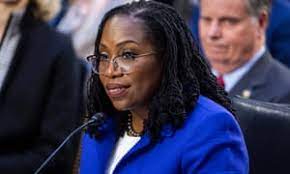 Judge Ketanji Brown Jackson, President Biden’s nominee to fill an upcoming Supreme Court vacancy, faces four days of Senate hearings starting Monday that are sure to include questions about her career.

In some ways, Jackson, 51, followed a similar trajectory as the court’s nine justices on her way to becoming Biden’s nominee: Harvard Law, Supreme Court clerk, federal appeals judge. Jackson is the first Black woman to be nominated to the nation’s highest court in its 233-year history and in other ways she would bring less-common experiences, namely having served as a district court judge and public defender.

Here’s which justices, if any, had similar educational and career experience before they made it to the Supreme Court.

Almost every sitting justice studied law at one of two elite universities: Four at Harvard Law and another four at Yale Law. Jackson also graduated from Harvard.

Many of the justices have Harvard ties beyond attending the school. Kagan spent six years as dean until 2009. Justice Brett M. Kavanaugh was paid to teach at Harvard before his bruising confirmation process elicited protests from hundreds of graduates.

Overall, more than a half of the justices confirmed to the Supreme Court since 1950 earned a degree from an Ivy League school, according to Federal Judicial Center data.

Law clerks act as assistants and counselors to judges, conducting legal research, preparing memos, drafting and proofreading orders and opinions, among other things.

Clerking for a Supreme Court justice is the starting point for 1 in 3 of the justices confirmed since 1950, including six of the nine current justices.

That would be the case for Jackson, too, who went on to work as a law clerk for three federal judges, including Breyer in 1999.

Alito did not clerk for a Supreme Court justice but he began his career clerking in the U.S. Court of Appeals for the Third Circuit.

If confirmed, Jackson will be the first justice with experience as a federal public defender and the first one since Justice Thurgood Marshall with significant experience as a criminal defense attorney on behalf of poor defend­ants.

Marshall, the first Black Supreme Court justice, founded the NAACP Legal Defense and Educational Fund in 1940 and worked within the legal system to improve rights for minorities. Jackson worked at the federal public defender’s office in D.C. for 2½ years representing indigent clients in criminal cases and detainees held at Guantánamo Bay, Cuba.

Federal judges with public defender exper­i­ence are less rep­res­en­ted on federal and state courts, in favor of those with prosec­utorial and corpor­ate experience.

According to Bannon, the nomination of Jackson shows that President Biden is “consistent” with his commitment to bring greater professional diversity to the federal judiciary. “We have seen a much higher incidence of people with public defender backgrounds or civil rights backgrounds being nominated to lower courts as well,” Bannon said.

If confirmed, Jackson will also be the only justice on the new court with experience on the U.S. Sentencing Commission — a bipartisan, independent agency created by Congress in 1984 to reduce disparity and promote transparency and proportionality in sentencing.

Breyer is the only sitting justice with previous experience in the Sentencing Commission, where he served between 1985 and 1989. As an Obama appointee on the commission after stints at private law firms, Jackson helped rewrite guidelines to reduce recommended penalties for drug-related offenses.

“Jackson’s public defense and Sentencing Commission experiences are going to be critical because they speak to her awareness of the other side of the criminal justice system,” said professor Steve Vladeck at the University of Texas School of Law.

Jackson and all sitting justices except for Kagan served as a federal judge before being nominated to the high court.

But Jackson spent almost nine years as a federal district and appeals court judge — more than Chief Justice John G. Roberts Jr. and Justices Clarence Thomas and Amy Coney Barrett, who each served less than three years before being nominated.

“Ketanji Brown Jackson brings more experience as a judge than four of the current justices did combined at the time they joined the court,” said Vladeck.

The most important question, according to Vladeck, is “how much the nominee rounds out the court and adds perspectives to the court that are not adequately represented or represented at all.”

Last year, Jackson was appointed by Biden to the U.S. Court of Appeals for the District of Columbia Circuit, often considered the second-highest court. Before that, Jackson served more than eight years as a judge on the U.S. District Court for the District of Columbia. Justice Sonia Sotomayor is the only sitting justice who spent time as a judge in the trial or district courts.