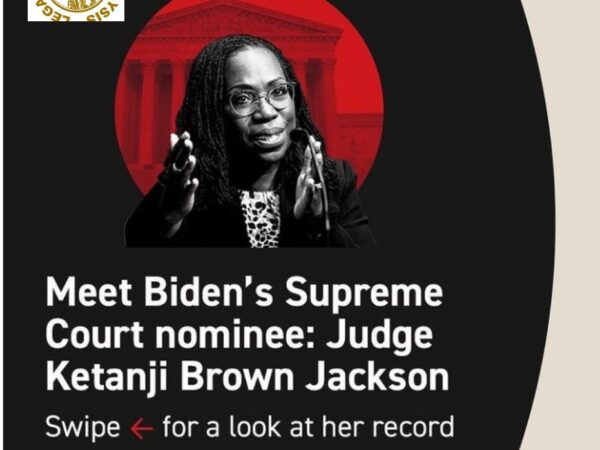 President Joe Biden is planning to nominate Ketanji Brown Jackson to succeed retiring Justice Stephen Breyer on the Supreme Court, according to two sources familiar with the decision. Jackson, 51, has been viewed for months as a top contender and fits the bill that Biden and left-leaning activists have sought in the aftermath of Republicans’ successful attempt to pull the judiciary to the right under former President Donald Trump. Her name has long been floated as a potential Supreme Court justice, particularly after she was tapped to fill the seat left by now-Attorney General Merrick Garland on the D.C. Circuit Court of Appeals, generally considered the second-most important court in the U.S.

— Jackson studied government at Harvard University, graduating in 1992. She also received her law degree from Harvard in 1996. (She reportedly once partnered with actor Matt Damon in a drama class.)

— A Washington, D.C., native who grew up in Florida, Jackson graduated from Miami Palmetto Senior High School, where other notable alumni include Amazon founder Jeff Bezos, two-time U.S. Surgeon General Vivek Murthy, as well as a number of former Olympians and professional athletes.

— Jackson clerked for three federal jurists, including a district court judge in Massachusetts, an appellate judge in the 1st Circuit, and Breyer himself.

— Earlier in her legal career, Jackson worked as an assistant federal public defender in Washington, D.C., where she worked on appellate cases and served as vice-chair of the U.S. Sentencing Commission for several years.

— As a public defender, Jackson was assigned to represent Guantanamo Bay detainee Khi Ali Gul. She has also been involved in other Guantanamo-related cases.

— In between her public legal work, Jackson also held a handful of private-sector positions. She spent three years at the firm Morrison & Foerster LLP, according to her court biography.

— President Barack Obama nominated Jackson for a district court judgeship in D.C. near the end of his first term as president, and she was confirmed in early 2013. He also interviewed her as a potential nominee after the death of Justice Antonin Scalia in 2016.

— Biden nominated her to the U.S. Court of Appeals for the D.C. Circuit in March 2021, as part of one of his early slates of nominees, and she was formally elevated last summer.

— Given her recent ascent, Jackson has yet to compile an extensive record as a circuit judge. In early February, she signed the opinion on behalf of a three-judge panel striking an attempt by the Federal Labor Relations Authority to allow government agencies to make workplace changes without negotiating them with the respective public-sector unions. She also ruled against Trump in his attempt to block the release of records from his White House related to Jan. 6, 2021.

— As a district court judge, Jackson issued several high-profile rulings. In 2019 she ruled against the Trump administration’s attempt to shield former White House counsel Don McGahn from testifying before Congress, writing that “presidents are not kings.”

— Several of Jackson’s rulings were overturned by a higher court, including those on Trump’s attempt to fast-track deportations and executive orders constraining government unions’ power.

Jackson was the judge who sentenced the “Pizzagate” conspiracy theorist who shot inside a D.C. restaurant to four years in prison.

— Jackson has fans within the Congressional Black Caucus, the influential group of lawmakers who also has the president’s ear.

— While it is uncertain that Jackson would garner Republican votes during a Supreme Court confirmation, there was a trio — Sens. Lindsey Graham of South Carolina, Susan Collins of Maine, and Lisa Murkowski of Alaska — who joined Democrats in confirming her to the D.C. Circuit Court of Appeals last year.

— Jackson is married to Patrick Jackson, a surgeon, whom she met at Harvard. They have two daughters together, Talia and Leila.

— Jackson also happens to share family ties with former GOP House Speaker Paul Ryan. Her husband’s twin is Ryan’s brother-in-law, and as a member of Congress, Ryan testified in support of her nomination to the district court.