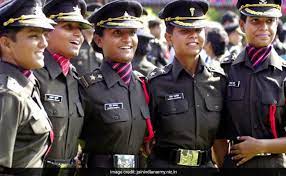 “We are extremely glad to know that the armed forces themselves took the decision to induct women into the NDA,” the Supreme Court said

In a historic move, the center today told the Supreme Court that women will be admitted into the National Defence Academy (NDA) for permanent commission into India’s armed forces. The government, however, said it needs some time to frame guidelines to pave the way for women to take NDA courses. The Supreme Court has told the center to file its reply by September 20.

“We are extremely glad to know that the armed forces themselves took the decision to induct women into the NDA. We know that reforms cannot happen in a day… The government will place timelines of the process and the course of action,” the Supreme Court said today while hearing a petition for allowing women to take NDA and Naval Academy exams.

“The armed forces play an important role… but need to do more for gender equality in the forces. We want them to take a proactive approach themselves in ensuring gender equality rather than waiting for courts to intervene,” said a bench of Justice SK Kaul and Justice MM Sundresh.

Today’s hearing comes less than a month after the Supreme Court, in a landmark interim order, said women can sit for the NDA admission exam, which has been rescheduled for November 14.

Additional Solicitor General Aishwarya Bhati informed the court today: “It is a delight to share this. Women will be admitted to the NDA. We will place a detailed affidavit. On June 24, the exam was postponed to November this year. Please grant status quo in these exams as this needs procedure and infrastructural changes.”

In the hearing on August 18, the court criticized a “mindset problem” when it came to equal service opportunities for men and women in the country’s armed forces, and warned the government “you better change”.

The court had also expressed hope that the interim order would persuade the army to initiate that change of its own accord, rather than be forced to do so because of a directive from the judiciary.

The government had argued that its recruitment policy was not discriminatory and that there were a wide number of ways in which women could apply.