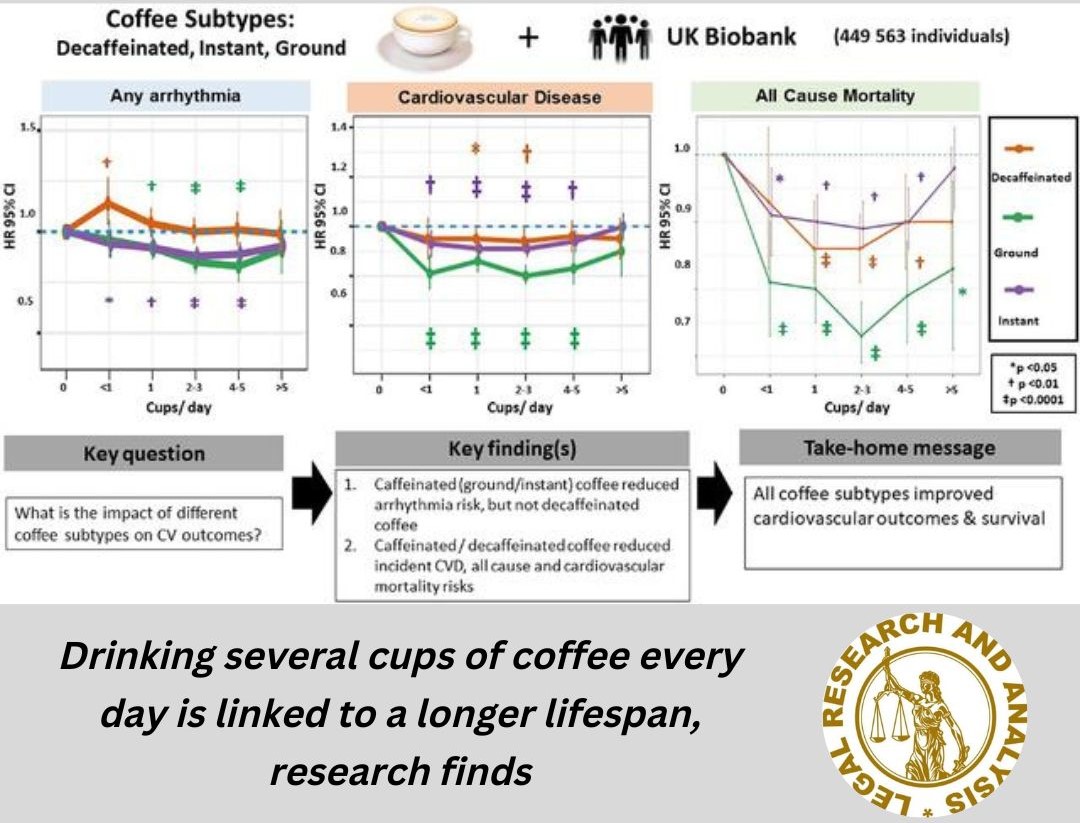 It turns out that drinking a few cups of coffee each day may actually do more than just give you a jolt at work — it might even help you live longer.

Two or Three cups of coffee a day is associated with increased longevity and a lower risk of cardiovascular disease, a new study published in the European Journal of Preventive Cardiology found.

Those benefits were seen regardless of whether the coffee was caffeinated or not, or whether it was ground or instant coffee, based on an analysis of nearly 450,000 people’s habits.

“Ground, instant, and decaffeinated coffee were associated with equivalent reductions in the incidence of cardiovascular disease and death from cardiovascular disease or any cause,” study author Peter Kistler said. “The results suggest that mild to moderate intake of ground, instant, and decaffeinated coffee should be considered part of a healthy lifestyle.”

Participants were free of these ailments at baseline and asked by researchers how much and what kind of coffee they drank every day if any.

During that time, cardiovascular disease was diagnosed in more than 43,000 participants, 9.6% of the total. Those who drink two to three cups of coffee a day had the lowest risk of developing the disease, researchers found, and those who drank ground, instant coffee, and decaffeinated coffee saw reduced likelihoods of 20%, 9%, and 6%, respectively.

An additional 30,100 people were diagnosed with arrhythmia. While ground and instant coffee were associated with a lower risk of that development, decaffeinated coffee did not help, researchers found.

Unlike other areas, drinking even more coffee made a difference for this condition, with those drinking four to five cups a day seeing the lowest reduced risk. Those who drank two to three cups also saw a significantly lower risk.

By the end of the study, 27,809 (6.2%) of participants had died. However, it was discovered that all types of coffee were linked with a reduction in death from any cause, with two to three cups a day associated with the greatest benefits. Ground, decaffeinated and instant coffees were linked to 27%, 14%, and 11% lower likelihood of death, respectively.

Kistler said that while caffeine is the most well-known aspect of coffee, it’s likely not the reason for the beverage’s life-saving abilities. Coffee has more than 100 biologically active components, he said.

“It is likely that the non-caffeinated compounds were responsible for the positive relationships observed between coffee drinking, cardiovascular disease, and survival,” he said. “Our findings indicate that drinking modest amounts of coffee of all types should not be discouraged but can be enjoyed as a heart-healthy behavior.”

One 2018 study found that over a 10-year study period, coffee drinkers were roughly 10% to 15% less likely to die than those who didn’t drink coffee.

Another, published last year, found that drinking three to four cups of coffee, regardless of whether it’s caffeinated, reduces the risk of developing and dying from chronic liver disease.