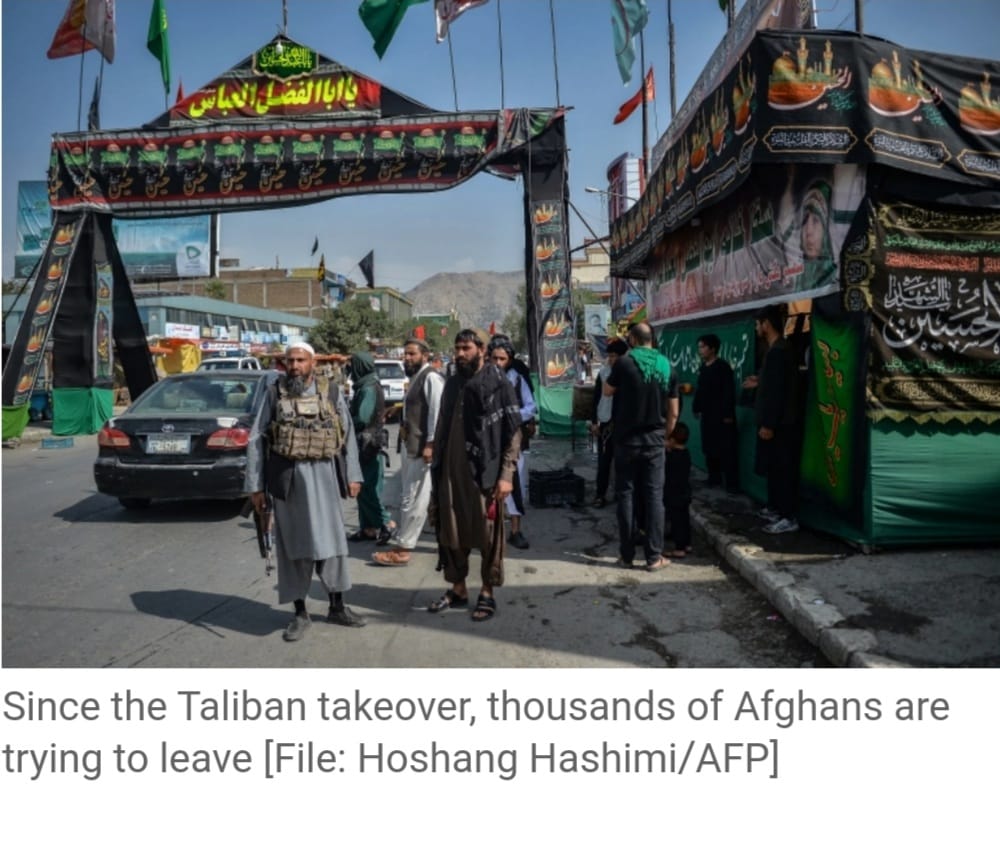 The Taliban has assured women of their rights ‘within Islamic law’, but what it means remains ambiguous.

Following the Taliban’s stunning takeover of the Afghan capital, Kabul, a pressing discussion has revolved around the new government’s legal system and, more specifically, how it will treat women.

After the Taliban’s victory last week, senior commander Waheedullah Hashimi laid out the broad strokes of how Afghanistan will be governed.

He said a council of Islamic scholars will determine the legal system and that an Islamic government will be guided by Islamic law, not the principles of democracy.

“There will be no democratic system at all because it does not have any base in our country,” he said. “We will not discuss what type of political system should we apply in Afghanistan because it is clear. It is Sharia law and that is it,” he told Reuters.

In the group’s first press conference on Tuesday, Taliban spokesman Zabihullah Mujahid assured women their rights would be respected “within the framework of Islamic law”, adding that women would have the right to education and work.

But Taliban officials remain vague on rules and restrictions, and how Islamic law will be implemented. It is, therefore, unclear what life will be like in the “Islamic Emirate of Afghanistan” – the name the Taliban refers to the country by.

“We will proceed in the coming days to go about finding solutions like working on the judiciary and [getting] religious scholars to review the system and its implementation … in light of the Islamic rules,” Suhail Shaheen, spokesman for the Taliban’s Political Office in Doha, told Al Jazeera. “Let’s wait until the whole system is in place.”

“As for women, they can have their basic rights as per Islamic rules,” Shaheen added.

According to HA Hellyer, a fellow at the Centre for Islamic Studies at Cambridge University, this ambiguity may take time to clear.

“There will be many questions about how the Taliban will apply the Sharia, or Islamic law, in Afghanistan. There won’t be much clarity on this for some time,” said Hellyer.

“Sharia” translates to “the way” in Arabic and refers to a wide-ranging body of moral and ethical principles drawn from the Quran and from the sayings and practices of the Prophet Muhammad.

The principles vary according to the interpretation of various scholars who established schools of thought followed by Muslims who use them to guide their day-to-day lives.

Many Muslim-majority countries base their laws on their interpretation of the principles of Islamic law but, despite this, no two have identical laws.

Even in Afghanistan, while both the Taliban – which ruled the country between 1996 and 2001 – and the government of Ashraf Ghani claimed to uphold Islamic law, they had distinct legal systems.

The Taliban’s interpretation of Islamic law comes from “the Deobandi strand of Hanafi jurisprudence” – a branch found across several parts of southeast Asia, including Pakistan and India – and the group’s own “lived experience as a predominantly rural and tribal society”, according to Talha Abdulrazaq, a research fellow at the University of Exeter’s Strategy and Security Institute.

Independent Afghan analyst Ahmed-Waleed Kakar said: “The Taliban can best be understood as ‘classical’ in interpretation, or veering more toward scholars seen as orthodox, such as those from the Indian subcontinent and the Middle East.”

Afghanistan’s 2004 constitution, which was followed by Ghani’s government, included a preamble that the nation’s laws would not contravene Islam, but the Taliban critiqued it for trying to reconcile “Islamic principles with the liberal world order and the fact that it was written and enshrined under what they perceived to have been the hegemonic West”, according to Kakar, who is also the founder of the Afghan Eye.

He pointed to the entertainment industry operating freely under Ghani as an example of something the Taliban would perceive as “un-Islamic”.

The Taliban emerged in the early 1990s following years of civil war. Many had studied in religious schools in Afghanistan and across the border in Pakistan.

The group promised to restore peace and security after capturing Kabul in the mid-1990s and overthrowing President Burhanuddin Rabbani, a senior figure in the Afghan Mujahideen who fought the Soviet occupation.

The Taliban was initially popular due to its success in stamping out corruption, curbing lawlessness, and bringing security to areas under its control.

When it came to power in 1996, it enforced strict dress codes on men and women and largely barred women from work and education.

The Taliban also implemented criminal punishments (hudood) in line with their strict interpretation of Islamic law, including public executions of people convicted of murderer or adultery by their judges, and amputations for those found guilty of theft. The group also banned television, music, and cinema.

With the memory of the 1990s still fresh, thousands of Afghans tried to escape the country over the past week. Many gathered at Kabul’s international airport and attempted to catch evacuation flights for staff at foreign missions.

Some women and rights groups expressed serious concerns about the future of rights and freedoms in Afghanistan.

According to Hellyer, today “is a new situation entirely”, so things are expected to be different.

The Taliban will have to deal with a new Afghanistan compared with that of the 1990s, with different roles already in place for women and other groups, said Hellyer.

The Taliban will also have to deal with the possibility of differences in opinion between the leadership and those in the wider movement, he told Al Jazeera.

According to Kakar, while the “theoretical interpretation of the Sharia would remain by and large the same as the 90s”, the prevailing circumstances – which are usually taken heavily into account to arrive at legal judgments – are different.

“The legal judgements and approaches too will differ,” he said.

“Whilst a fully democratic system is unlikely, it is plausible that features of the previous regime [Ghani’s] would remain, so long as these complied with the general ethos of the new, Taliban-approved ‘Islamic system’,” added Kakar.

The group may also be interested in projecting an image of moderation and inclusivity to avoid being isolated by the international community as was the case in the 1990s.

“They have admitted to making mistakes in their first emirate so now we have to wait and see what lessons they believe they’ve learned,” Abdulrazaq said, adding that the Taliban’s legal views are related to their lived experience, which in the past involved being in “constant warfare” and losing power.

The EU said it was suspending development aid to Afghanistan until the political situation becomes clearer. The EU’s foreign policy chief, Josep Borrell, said that the Taliban must respect UN Security Council resolutions in order to access 1.2 billion euros in development funds.

On the ground, the movement has been somewhat contradictory.

Female journalists were allowed to resume their work on camera at Afghanistan’s most popular television station, Tolo – even interviewing a Taliban leader on Tuesday – as the group announced an amnesty for civilians who worked with foreign groups over the past 20 years.

Meanwhile, Shabnam Dawran, a news anchor with state channel RTA Pushto, released a video on Thursday saying she was told to go home when she tried to go to work.

On the same day, the Taliban cracked down on protesters wanting to display the Afghan flag.

A day later, a UN threat assessment report said the Taliban was going house-to-house searching for opponents and their families, raising fears of revenge.

The Taliban says it has banned members from entering private homes and denied the claims but said it is investigating cases of criminality by individuals.