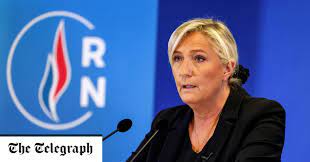 France is losing the battle against Franglais
The concern over language speaks to France`s anxieties about its place in the world. Now reality dictates that English has taken over what could possibly bring together the most exclusive club of the French establishment, the Académie Française (formed in 1635, comprising only 40 members known as “Immortals”) and that somewhat embattled disruptor of French politics, Marine Le Pen?

The answer is nothing less than the “Defence of the French Language”, a cause that – to the bafflement of many outsiders – rouses the French to the barricades like few others.

“People do not understand why they must be subjected to this gibberish instead of French,” thundered Hélène Carrère d’Encausse, the grand 92-year-old aristocrat who has been the Académie’s Perpetual Secretary for three decades, in an interview yesterday. “This is evidence of a divide between an elitist fringe that claims to represent the ‘start-up nation’, and the rest of society.”

In 1994, the Académie inspired legislation stipulating that any foreign expression used in advertising, as well as official documents, must be translated, though it has since been largely forgotten. For “foreign” here, one should read “English”. It is the language of “Anglo-Saxon domination” that purists most blame for the “undermining of French culture”. And indeed we are facing a flood of made-up words often understandable in neither language – “le fooding”, “le shooting” (for a photoshoot, not a murderous attack), “le co-working”.

The rot goes right to the top. It was Emmanuel Macron who, as economics minister, declared in 2014 that he wanted to turn France into “La Start-Up Nation”. His would-be successor, Valérie Pécresse, the conservative presidential candidate, has trumpeted her campaign HQ’s “open-space” layout. Reporters also spotted twee “thinking-room” labels on the toilet doors.

Marine Le Pen makes a point of never using Franglais, and neither does Eric Zemmour, the radical upstart who is vying with her for a place in the election run-off. He wants to expel foreign migrants from France: she merely wants to purge foreign words from the language.

This concern for the language plays on deep insecurities about France’s place in the world. For centuries, French was the global language of diplomacy and literature.

Educated foreigners from Trollope to Tolstoy spoke it so well that the writer Gustave Flaubert, possibly the language’s greatest purist, would ask his friend the Russian novelist Ivan Turgenev to read his drafts.

But in recent decades, English has taken over: in business, movies, pop music, news, international forums. The Francophone world is shrinking just as the Anglophone is growing. The French, for example, take it as a personal insult that, despite Brexit, most EU working sessions are held in English. And here Mrs Carrère de Causse, not habitually concerned by such matters, makes a valid point on class and privilege.

The teaching of English in France is about as bad as the teaching of French in Britain or America. Those people who, like Emmanuel Macron or Valérie Pécresse, speak the language fluently, went to top schools and were sent by their affluent parents for the French equivalent of the gap-year tradition: linguistic stays abroad.

This separates them from the majority of the people they aspire to govern – and it is increasingly resented by those who feel overlooked by this out-of-touch elite.

Surprise
0 0 %
current affairs Tags:France is losing the battle against Franglais