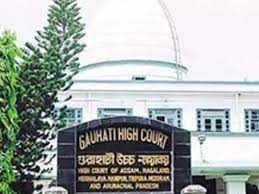 No claim can be made by the children of the deceased on such property, which was not inherited by the deceased during his lifetime: Gauhati High Court

The Gauhati High Court has held that the children of the deceased cannot have any claim on such property which was not inherited by the deceased during his lifetime. Staying on the property does not mean that the property got transferred to the people who are living on that property.

Justice Nelson Selo observed, “Shri K Vanalalmanasavama did not inherit the land and property during his lifetime… If so, the petitioners have no ground to claim for the said property on the ground of being the daughter of the deceased.” It is possible.”

The petitioner K. Rochinga (late) was the original owner of the property. The petitioners’ father K Vanlalmalasawma (Late) was allowed to reside in the property till his death i.e. 06.05.2014. The property remained in the name of the grandfather of the petitioners. Hence Respondent No. 1 & Two (Brother of Petitioner’s father) approached the Civil Judge with a title suit, claiming declaration of the said property and other properties left by Late Vanlalmanasavama.

️During the pendency of this title suit, the matter was referred to Lok Adalat and as a result, a settlement order was issued by the parties concerned on 26.09.2015. The petitioners of the present writ petition were aggrieved by the disposal order of Lok Adalat as it did not leave any share for the petitioners on the property left by their late father.

The respondents argued that a writ petition against a private person is not maintainable. Further, he argued that the writ against the disposal order of Lok Adalat is admissible only on limited grounds as decided by the Supreme Court in Punjab & Ors vs. Jalore Singh et al.

The High Court observed that the grounds mentioned in Jalore Singh (Supra) do not attract in this case as the order of Lok Adalat was passed after mutual agreement between the parties, and was signed by the parties concerned. Thus, the Lok Adalat neither exceeded its jurisdiction nor exercised any powers which were not vested in it. The High Court found no dispute on the fact that the petitioner was residing in the said property since the time his father was alive.

Therefore, “they should be allowed to live peacefully in the main building for as long as they wish.” The Court further noted that even though the petitioners have attempted to project that Respondents Nos 1 and 2 have committed fraud or misrepresentation in respect of the properties left by their late father, however, the fact remains that The petitioner was also given part of the money left behind by the late father.

“Respondent No. 1 and 2 in their title suit also sought a declaration of properties left by Late K Vanalalmalsama in his name. Hence, it is not a case of fraud or misrepresentation as sought by him. Has been.”