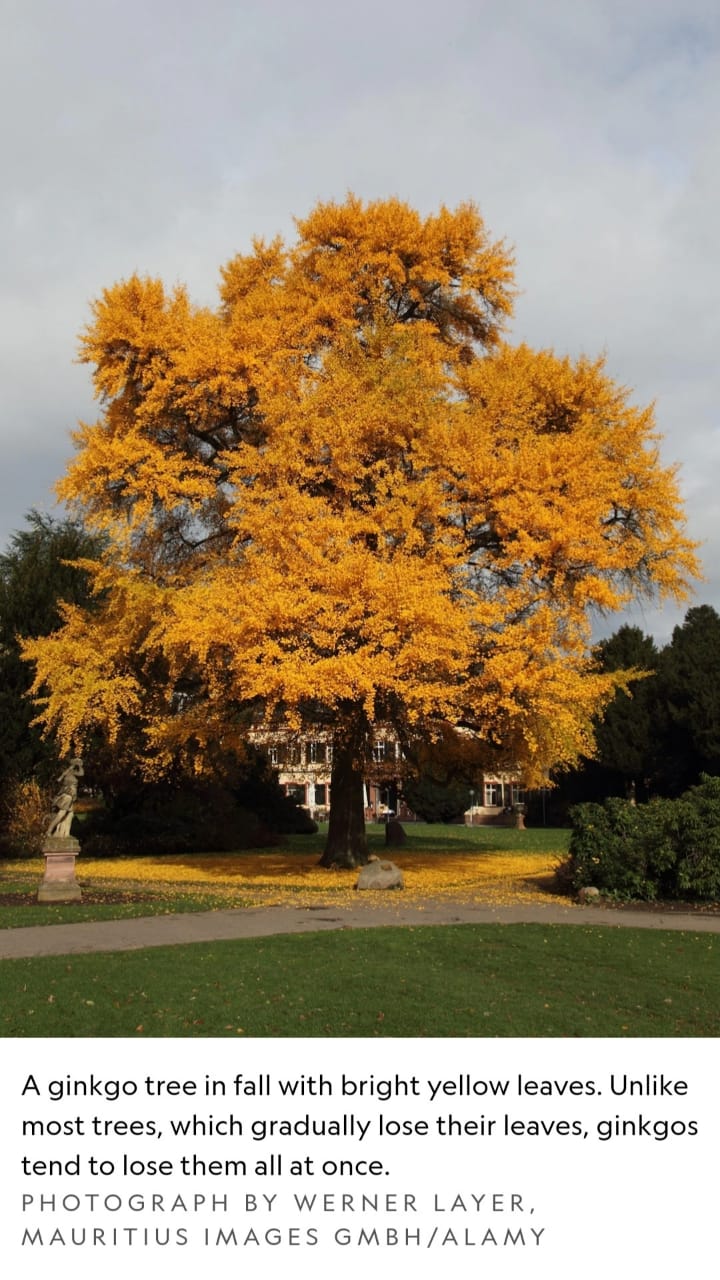 These ancient trees persisted for nearly 200 million years until they all but vanished. Now they line city streets.

On the streets of Manhattan and Washington, D.C., in neighborhoods in Seoul and parks in Paris, ginkgo trees are gradually losing their bright yellow leaves in reaction to the first bout of frigid winter air.

This leaf drop, gradual at first, and then suddenly, carpets streets with golden, fan-shaped leaves every year. But around the world, scientists are documenting evidence of the event happening later and later, a possible indication of climate change.

“People would ask us, ‘When should I come out to see peak ginkgo color?’ and we would say the 21st of October,” says David Carr, the director of the University of Virginia’s Blandy Experimental Farm, which is home to The Ginkgo Grove, an arboretum with over 300 ginkgo trees.

Carr, who’s been at The Ginkgo Grove since 1997, says the trend toward warmer falls and later-in-the-season leaf color is a noticeable one. “Nowadays it seems to be closer to the end of October or the first week of November.”

But this is not the first time the ancient species has confronted major climatic changes. And the story of ginkgos is not the familiar one of human carelessness with nature.

Thanks to fossils found in North Dakota, scientists know the species Ginkgo biloba has existed in its current form for 60 million years; it has genetically similar ancestors dating back 170 million years to the Jurassic Period.

In its nearly 200-million-year timeline, “they gradually were whittled down. They almost went extinct. Then they have this renewal that comes from their association with humans,” says Peter Crane, author of the book Ginkgo and one of the world’s foremost Ginkgo experts.

The International Union for the Conservation of Nature, an organization that tracks the survival of Earth’s species, classifies the tree as endangered in the wild. Only a few rare populations are thought to potentially exist in China. When you walk on those bright golden fans scattered on some rain-darkened sidewalk this fall, you’re having a close encounter with a rare thing—a species that humans rescued from natural oblivion and spread around the world. It’s “such a great evolutionary story,” Crane says, “and also a great cultural story.”

The last of its kind

On Earth today there are five different types of plants that produce seeds: flowering plants, the most abundant; conifers, plants with cones; Gnetales, a diverse group of about 70 species including desert shrubs, tropical trees, and vines; cycads, another ancient group of palm-like trees—and the lonely ginkgo. In the plant kingdom’s Ginkgoaceae family, there is just one living species, Ginkgo biloba.

Scientists think the world once contained many different species of ginkgo too. Fossilized plants found in a coal mine in central China that date back 170 million years show ginkgo-like trees with only slight variations in the shape of their leaves and number of seeds.

The species is often referred to as a living fossil—a category that also includes horseshoe crabs and royal ferns, among others—because it’s a remnant of a once diverse group that existed millions of years ago. Because ginkgo is such an ancient species, it retains characteristics not often seen in more modern trees.

Ginkgo trees are either male or female, and they reproduce when a sperm from a male tree, carried by grains of pollen floating on the wind, connects with a seed on a female tree and fertilizes it, not unlike the human fertilization process. They also show signs of potentially switching sex, from male to female. The phenomenon is rare to observe in ginkgos and not entirely understood, but it’s thought males sometimes produce female branches as a failsafe to ensure reproduction.

One theory for the demise of the world’s ginkgo species begins 130 million years ago when flowering plants began diversifying and spreading. There are now more than 235,000 species of flowering plants. They rapidly evolved and proliferated, growing faster and using fruit to attract herbivores and petals to attract more pollinators than ginkgos.

“It’s possible that [ginkgos] were elbowed out of the way, that they faced competition from more modern plants,” says Crane.

Already competing to survive, ginkgos began to disappear from North America and Europe during the Cenozoic Era, a time of global cooling that began around 66 million years ago. By the time the last ice age ended 11,000 years ago, the remaining survivors were relegated to China.

As to why they evolved such a pungent stench, Crane says, “My guess is they were eaten by animals that liked smelly things. They then pass through the gut and germinate.”

Those same seeds may have helped ginkgo find favor with humans 1,000 years ago. Once cleaned of their outer layer, ginkgo seeds resemble pistachios. It’s then, when the trees had long since disappeared elsewhere, that people in China may have begun planting them and eating their seeds, Crane says. (Ginkgo seeds are edible only after the outer toxic layer is removed.)

It wasn’t until German naturalist Engelbert Kaempfer took a late-17th-century trip to Japan, thought to have acquired ginkgos from China, that the plant was brought to Europe. Today, ginkgo is one of the most common trees along the U.S. East Coast. It’s seemingly naturally resistant to insects, fungi, and high levels of air pollution, and has roots that can thrive under concrete.

The species was thought to be extinct in the wild until the early 20th century when a supposedly undomesticated population was found in western China. A paper published in 2004 disagreed, suggesting instead that those trees had been cultivated by ancient Buddhist monks—but suggesting that other ginkgo havens might be found in the southwest of the country.

Then in 2012, a new paper cited evidence that a wild population did indeed exist in southwestern China’s Dalou Mountains.

“I think there may [also] be some wild Ginkgo populations in the refugia area of subtropical China. But it needs more exploration,” says Cindy Tang, an ecologist at Yunnan University and author on the 2012 paper. Those wild populations are a potential treasure trove of genetic diversity for breeders seeking to improve the domesticated species.

Crane isn’t worried about its future, though: The popularity of the species will help it survive. “Though its status in the wild may be precarious and difficult to access, it’s a plant that’s unlikely to ever go extinct,” Crane says.