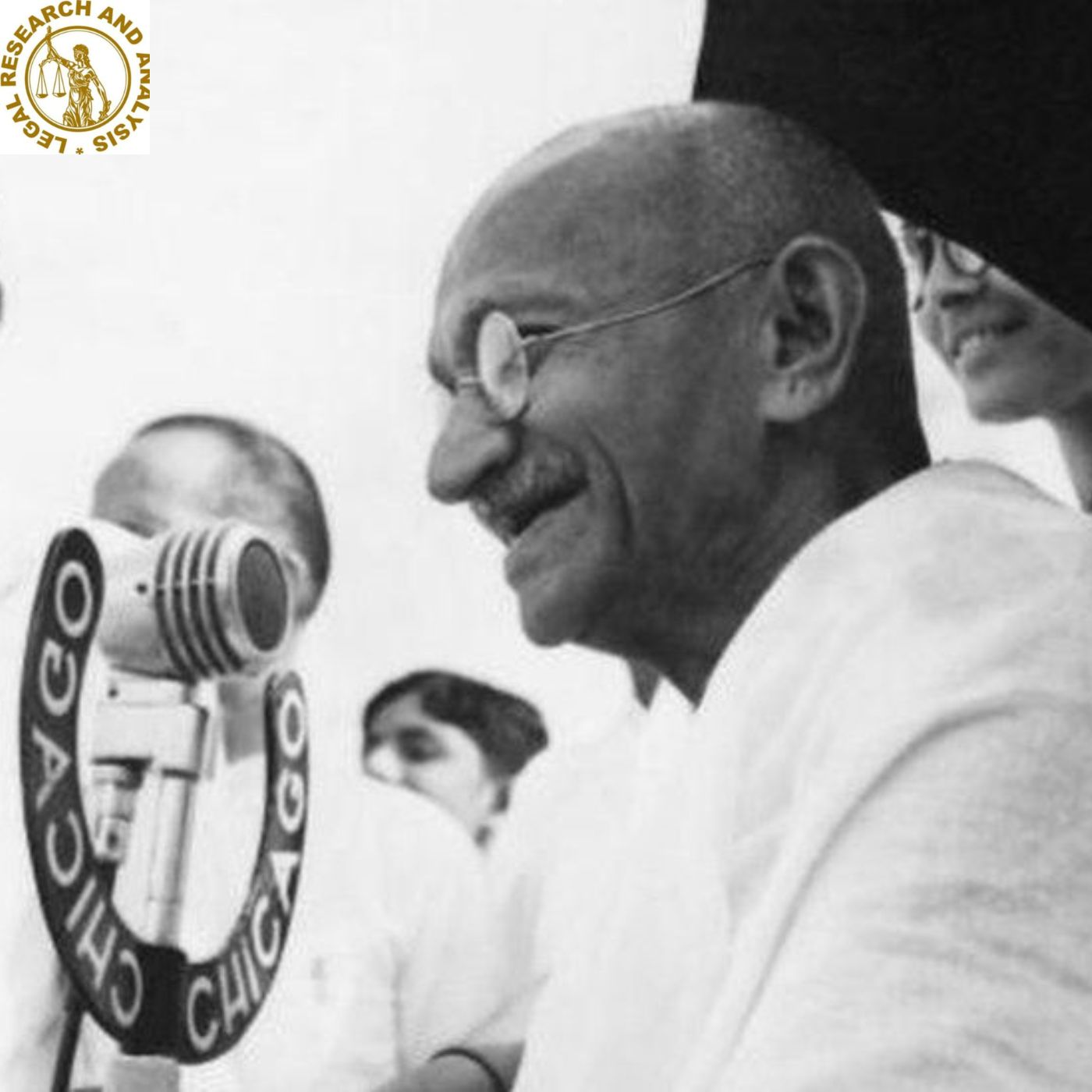 A young volunteer for the Indian National Congress party had an epiphany in 1929.

Motwane later recalled the leader “going from platform to platform” at the same venue to “enable his flawed voice to be heard by large numbers [of people].”

That’s when the 27-year-old second-generation migrant businessman apparently decided to “amplify” the leader’s voice so that “all who were agitated, more to hear than to see him, would be able to hear him clearly.”

Motwane was ready with a public address system two years later at the Congress party’s session in Karachi, which is now a bustling city in modern-day Pakistan.

One of his earliest surviving photographs shows him beaming in his trademark white Gandhi cap, showing the leader the branding on his microphone: Chicago Radio.

For the next two decades, Chicago Radio was synonymous with the loudspeakers that broadcast to the masses India’s struggle for independence from imperial rule.

“We called our loudspeakers the ‘voice of India,'” says Kiran Motwane, Nanik’s son and the family’s third-generation scion.

The name Chicago Radio was unusual for a company based in Bombay (now Mumbai), where the Motwanes had relocated in 1919. Kiran Motwane claims that his father used the name of a Chicago-based radio manufacturer that was closing down “due permission.”

One reason for the fascination with a foreign name could be that Motwanes belonged to a thriving, globally networked community.

Initially, Nanik Motwane imported from the United Kingdom and the United States loudspeakers, amplifiers, and microphones – the essential components of a public address system. His five-person engineering team then peeled them back to expose them and reverse-engineered them for local use.

Nanik Motwane would travel to party meetings by train and truck, carrying his PA systems, even as his siblings assisted in the business.

On perilous road journeys, volunteers and local police provided security. A day before the meeting, he would arrive at the meeting location, which was usually a dusty local field, and set up and test the system to ensure there were enough batteries to power them.

The horn-shaped loudspeakers would then be tied to bamboo poles and spread across the ground to ensure that the sound reached all corners.

Nanik Motwane estimated that a dozen loudspeakers spread across a medium-sized field could accommodate tens of thousands of people.

Later, for better amplification, he began stacking speakers on top of each other. He had 100 public-address sets ready to go across India for any Congress meeting.

“He was a pioneer of public address systems in India, and the party was the only consumer,” Kiran Motwane explains.

Some of India’s Independence heroes’ most stirring speeches were relayed through Chicago Radio loudspeakers over the years. Jawaharlal Nehru, India’s first prime minister, was a big fan of the brand.

“Your loudspeakers did the most excellent work, and the arrangements were greatly appreciated by all,” Nehru wrote after a meeting with Nanik Motwane.

Nanik Motwane also assisted in the operation of a clandestine radio station that broadcast messages from Gandhi and other leaders in order to counter the imperial propaganda broadcast by the state-run broadcaster.

He was one of five people arrested two and a half months after the station began broadcasting in 1942, the year Gandhi called on all Indians to rise up in nonviolent revolt against British rule, launching the Quit India movement.

According to Usha Thakkar, who has written a book about it, the Congress Radio station case remains an “important chapter in the history of India’s freedom struggle.” Nanik Motwane was apprehended for allegedly assisting the station with equipment and technical support. Interestingly, “despite its proximity to the freedom movement,” Chicago Radio was not on the police radar.

British officials would frequently visit Nanik Motwane to purchase police radio equipment, and their books appeared to be in order.

Motwane informed the cops that he was not a member of the Congress party. He was released because no evidence was found. “He was tortured in jail for a month,” says Kiran Motwane. “Yes, he was assisting the underground police.”

Nanik Motwane was an astute businessman, well aware of his legacy as such an outspoken nationalist. He wrote to newspapers repeatedly, requesting copies of photographs they had taken of leaders speaking into Chicago Radio microphones. He compiled massive albums of photographs and newspaper clippings from public meetings.

That isn’t all. He’d record the speeches on spool tapes and give the party a copy. He hired a photographer who accompanied him to the meetings with film and movie cameras, photographing and filming priceless footage of sessions featuring luminaries such as Gandhi, Nehru, Sardar Vallabhbhai Patel, and the charismatic Subhas Chandra Bose. Many of these recordings are scattered throughout the Motwane home in uptown Mumbai.

“He used to keep detailed records of the meetings, he was very meticulous,” says Kiran Motwane.

Motwane supplied PA systems for some half a dozen public and party meetings for the Congress every month for close to three decades, his family says.

“He used to keep meticulous records of the meetings,” Kiran Motwane explains.

According to his family, Motwane supplied PA systems for a half-dozen public and party meetings for Congress every month for nearly three decades.

At its peak, Chicago Radio employed over 200 people across India, manufacturing PA systems in two cities and servicing them in many more. He didn’t start selling commercially until after the country gained independence. In free India, he did not charge the party until the early 1960s.

Lata Mangeshkar, the doyenne of playback music, sang Aye Mere Watan ke Logon (Ye People of my Land), an ode to fallen soldiers, into Chicago Radio speakers to a tearful-eyed audience at a sprawling ground in Delhi in 1963.

In the 1970s, Chicago Radio received an unusually stern letter from the office of then-prime minister Mrs. Gandhi. “It requested that we change the name of our company. Why are you calling your loudspeaker by a foreign name? It inquired, “Kiran Motwane remembers.

“We have no idea what caused this. My father wrote to the prime minister, expressing his opposition to the move. Motwane was on one side, and Chicago Radio was on the other.”

Chicago Radio is still in business nearly a century after it was founded to amplify the voice of India’s freedom. It is now a low-profile, small firm selling public address and intercom systems in a crowded market. “We’re still making noise,” says Kiran Motwane. It is, however, mute.