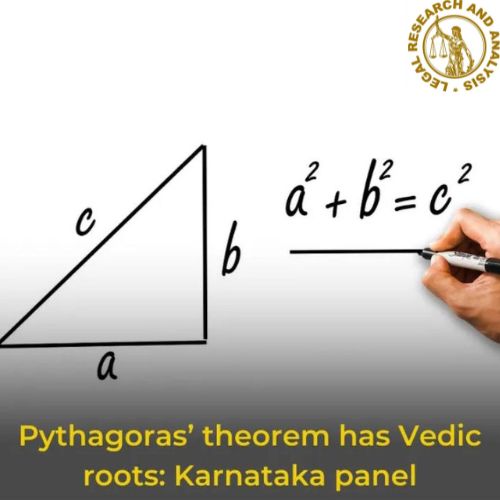 Karnataka has proposed teaching Sanskrit as a third language to all schoolchildren, as well as incorporating Manusmriti and ancient numerical systems such as Bhuta-Sankhya and Katyayani-Sankhya Paddhati into the curriculum.

Furthermore, one of its proposals for inclusion in the new NEP school curriculum suggests that students be encouraged to question “how fake media such as Pythagoras theorem, an apple falling on Newton’s head, and so on are created and propagated.”

Concerning the reference to Newton’s gravity apple and Pythagoras theorem as “fake news” in one of the position papers, Madan Gopal, chairman of the advisory committee to enact NEP in the state, stated, “This is the group’s interpretation.” Gravity and Pythagoras have their origins in Vedic mathematics.

This is an Indian-centric strategy. There is a lot of information about this on Search engines. For example, it is thought that Baudhayan established Pythagoras’ mathematics in Vedic texts. This is a point of view. You can agree or disagree with it.”

To start preparing policy papers on school education, the state formed 26 committees. Among these were Knowledge of India and others. According to sources, heated debates occurred during meetings to evaluate some position papers.

Several troubling points were raised in the policy document on Knowledge of India, which is suggested as a mandatory subject.

“This paper has been equipped under the chairmanship of an eminent IIT professor,” Madan Gopal said, dismissing the objections. The state government has reviewed and approved it.” V Ramanathan of IIT (BHU), Varanasi, led the committee.

The paper laments the current educational system, attributing it to “policies at both the state and central levels that, under the guise of Secularization, have methodically ushered our impressionable people into the zone of disconnectedness and ignorance of their very own ancestors.” “In a country with thousands of languages, at least three must be taught: the regional language, English, and another Bharatiya language, ideally Sanskrit,” the paper stated.

According to the paper, many Smrti works “have been relegated to irrelevance or have been proscribed due to an imperfect and poor interpretation of their credo and content.” “For example, and although Manusmirti contains noble ambitions of the general populace and societal good, its very name has become provocative to the extent that it solicits unjustified lament from a portion of our society,” it said.