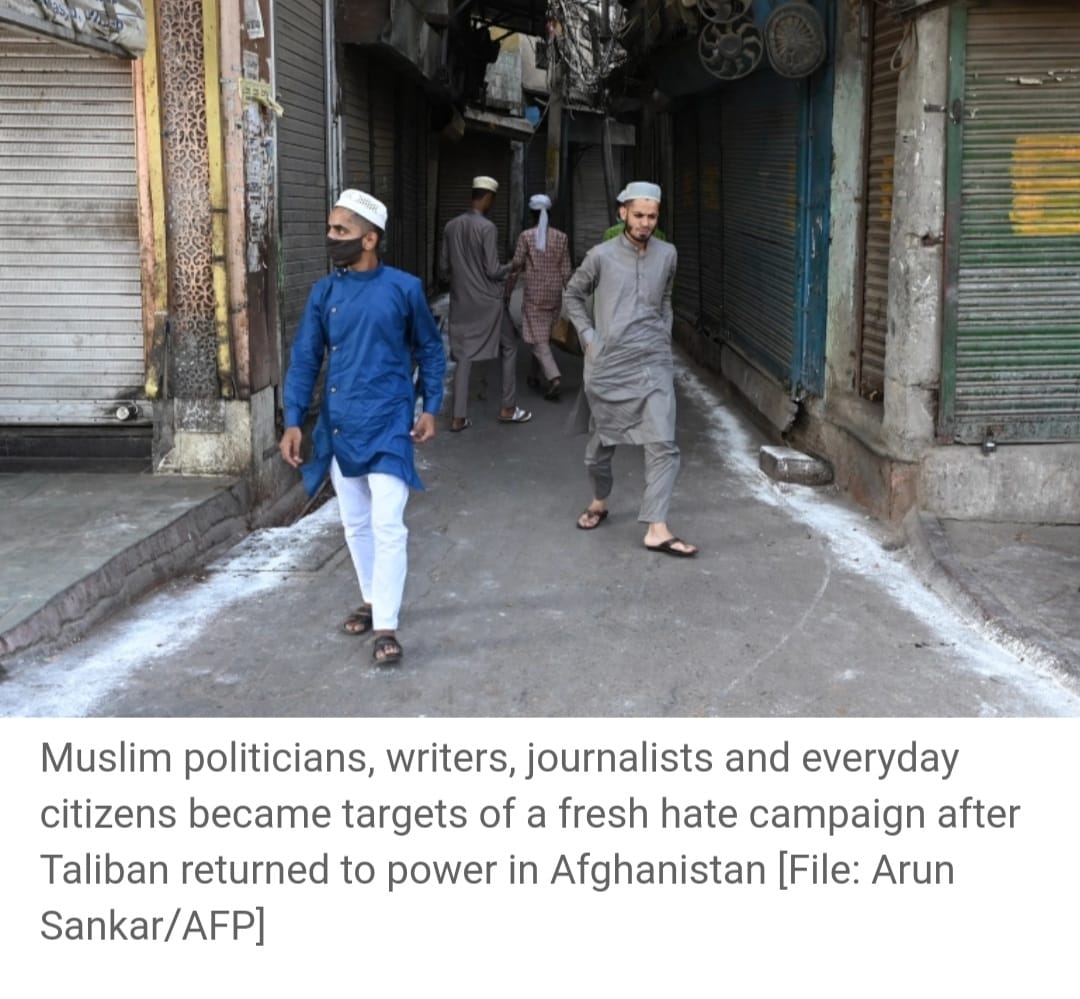 New Delhi, India – The Taliban’s return to power in Afghanistan has given yet another excuse to India’s Hindu supremacists to unleash a new wave of Islamophobia against its Muslim minority.

Muslim politicians, writers, journalists, social media influencers, and everyday citizens have become the targets of a hate campaign launched by the country’s right-wing, including members of the governing Bharatiya Janata Party (BJP).

As soon as the Taliban toppled the Western-backed government last month, the hashtag #GoToAfghanistan began trending on Indian social media, a repeat of the #GoToPakistan campaign launched by right-wing groups who want to turn India into an ethnic Hindu state.

“The word Taliban or Talibani is deliberately being fed into the vocabulary of the masses by both sides of the spectrum – people who might be anti- or pro-BJP,” poet and activist Hussain Haidry told Al Jazeera.

“It is being done just the way Pakistani or ‘jihadi’ or ‘aatankwadi’ (terrorist) terms were fed as slurs against Muslims.”

Shortly after the Taliban took over Kabul, BJP politician Ram Madhav called the 1921 Moplah rebellion one of the first manifestations of a “Talibani mentality” in India, and that the state government of Kerala was trying to “whitewash” it.

Madhav was speaking at an event to mark 100 years since the peasant uprising against British colonial rule and the feudal system in the southern state.

In another incident, media reports said Muslims in the central state of Madhya Pradesh raised pro-Pakistan slogans during a Muharram procession. The BJP state chief minister commented on the reports, saying he would “not tolerate the Talibani mentality”. Two days after his comments, leading fact-checking website Alt News debunked the initial media reports.

In the northeastern state of Assam, 15 Muslims, including Islamic scholars, a politician, and a local journalist, were arrested for allegedly “supporting” the Taliban in social media posts and charged under the Unlawful Activities (Prevention) Act or UAPA, a draconian anti-terror law under which dozens of Muslims and other government critics are behind bars.

‘What do we have to do with Taliban?’

Haidry said Muslims who counter hate or are vocal about atrocities against the community are being accused of being Taliban sympathizers, even if they condemn the group.

In the city of Lucknow, famous poet Munawwar Rana faced right-wing ire when he drew an analogy between the Taliban and Valmiki, who wrote the Hindu epic, Ramayana.

During a TV debate two weeks ago, Rana said characters change over time and cited as an example Valmiki who “became a god after writing Ramayana; before that he was a bandit”.

Rana says he said nothing wrong and that he is being targeted for his Muslim identity by people who want to polarise society on religious lines before elections early next year in his state of Uttar Pradesh.

“Being an Indian or a Muslim, when have we ever supported any terrorist? What do we have to do with the Taliban? But if there is a blast anywhere in the world and a Muslim is involved, we will be blamed for it,” Rana told Al Jazeera.

A video clip posted by ANI news agency on August 17 showed Barq as saying that Indians had fought for freedom when the country was under British occupation.

“Now they [Afghanistan] were under American occupation, earlier it was Russia, they [Taliban] also wanted freedom and to free their country,” he said.

However, a sedition case was filed against him and two others – who were said to have made “similar statements” – on the same night.

Barq told Al Jazeera his statement was misconstrued and that he had called the Taliban takeover in Afghanistan the country’s internal matter.

“Governments keep changing in other countries. Why should we take any interest in what is happening anywhere? Our country [government] will create a policy, on whether to acknowledge their [Taliban’s] rule or not and we will go with it,” said Barq.

While the BJP leaders and spokespersons in India called the Taliban “terrorists”, the country’s ambassador to Qatar met with the head of the Taliban’s political office in Doha on Tuesday.

Like Rana, Barq also said because Uttar Pradesh is a key state in national politics, the BJP is misrepresenting his statement to polarise voters.

A video released by Islamic scholar and member of the All India Muslim Personal Law Board, Sajjad Nomani, congratulating the Taliban on taking Kabul further stoked the controversy.

Meanwhile, a group of activists, journalists, and Muslim intellectuals condemned both the Taliban’s acts and the “euphoria” in “a section of Indian Muslims” over the Taliban’s capture of power.

While talking to Al Jazeera about Barq, Nomani, and Rana, political anthropologist Irfan Ahmad said no democrat should find anything objectionable in their statements because they had been commenting on the Taliban’s fight against foreign powers, critiquing the 20 years of occupation and bombardment of an impoverished country in the name of a “war on terror”.

“They are not so much praising Taliban as their deeds: their exemplary entry into Kabul amidst non-violence, their promise and continuing the practice of girls’ education, and their maintenance of sectarian harmony,” said Ahmad, a senior research fellow at Max Planck Institute for the Study of Religious and Ethnic Diversity in Gottingen, Germany.

Statements construed to be in support of the Taliban gave more fodder to BJP leaders and spokespersons, especially with the elections around the corner in Uttar Pradesh.

Uttar Pradesh’s controversial saffron-robed chief minister, Yogi Adityanath, was quick to jump on the bandwagon and claim such statements were an “attempt to Talibanise” India.

“The kind of atrocities against women happening there… but some people are shamelessly supporting Taliban,” he said in the state assembly.

Adityanath’s government announced the setting up of a new anti-terror center in Deoband, the birthplace of the Deoband school of thought on which the Taliban loosely bases its ideology.

The influential Islamic school has inspired tens of thousands of institutions across the world.

Commenting on the anti-terror center, state spokesman Shalabh Mani Tripathi said on Twitter: “Amidst the barbarism of Taliban, also listen to the news of UP. Yogiji has decided to open ATS commando center in Deoband with immediate effect.”

Barq said the Uttar Pradesh government is “busy making anti-Muslim policies”, calling Deoband a terror hub and setting up the center there as a means to further its “politics of hate”.

“What has Deoband done to be labeled as such? It is an Islamic seminary where alim (Islamic scholars) study, what is wrong there?”

“This is a policy of hate which they think will win them the elections.”

Hate attacks on India’s Muslims, including public lynchings and targeting of their businesses, have become a daily affair in India.

Last year, as the coronavirus pandemic erupted, a group of Islamic missionaries, called the Tablighi Jamaat, was blamed for spreading the virus in India.

In its 2020 report, the US Commission on International Religious Freedom (USCIRF) called India a “country of particular concern”.

“The national government allowed violence against minorities and their houses of worship to continue with impunity, and also engaged in and tolerated hate speech and incitement to violence,” the report said.

Since the fall of Kabul, Indian TV channels have run shows portraying Muslims as “Taliban apologists” or its “spokespersons”. The daily debates saw prominent Muslims such as Rana and Barq forced to explain themselves while BJP panelists called them “Talibani”.

On one of the shows, a state official said that India should learn from what happened in Afghanistan and keep “Islamic fundamentalism” in check.

A deluge of misinformation also engulfed newsrooms. Old videos and photos from Syria, Yemen, or Iraq were passed off as incidents from Afghanistan. A number of fact-checking websites debunked the claims.

According to Ahmad, allegations of “barbarism” and atrocities against women by Muslim men were used by Hindu supremacists to “reactivate hysteria” against the Taliban and continue humiliating Muslims.

Many Indian Muslims say they are scrutinized whenever a terror-related incident involving Muslims happens anywhere and the community is expected to condemn the act.

On the question of why Muslims should be held accountable for events abroad, Ahmad said: “The assumption is since your religion is Islam and it is a global religion, therefore you have to condemn it”.

“But the reverse is never assumed. That is, for good, humanitarian works by Muslims abroad, Indian Muslims are never held responsible, nor do such works by Indian Muslims become news for the media in India,” he said.