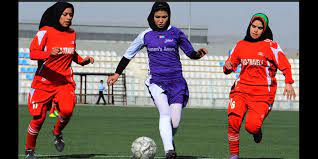 Pakistan has said it will allow dozens of young players from the Afghan Girls National Youth Football Team currently trapped in hiding in Afghanistan to enter the country, The Independent can reveal.

A letter from the embassy of Pakistan, seen by The Independent, says it will grant temporary visas to the 32 girls who are stranded in the neighboring country.

The Independent understands the girls are in a group of around 80 people in total which also includes their relatives and football coaches.

Campaigners said it is not yet clear if the family members and football staff would also be given visas to enter Pakistan but it is highly unlikely the girls will be granted access to the country without them.

It comes after The Independent recently revealed 32 girls are stranded in Afghanistan – after seeing a letter which asked Pakistan’s prime minister to urgently help.

The letter urged Pakistan’s PM, Imran Khan, to give the girls and their families temporary visas to enable them to enter Pakistan, warning “time is running out” and the girls are at risk of “grave threats” from the Taliban and “disintegrating security”.

While campaigners told The Independent the young women, many of whom are in their teens, are in hiding in places as reports surfaced of the Taliban searching hotels in a bid to track them down.

“These teenage and young female athletes are at immediate risk because of their association with women’s football in Afghanistan and their participation in national public football tournaments,” states the letter, which was signed by Kashif Siddiqi, a London-born footballer who played for Pakistan’s international team and who co-founded an NGO called Football for Peace.

Commenting on news the girls will be permitted to enter Pakistan, Sacha Deshmukh, Amnesty UK’s chief executive, told The Independent: “It’s a huge relief these girls have been granted sanctuary, but utterly appalling that they were facing such danger for doing something as simple as playing football.

“It’s a harsh reminder of the grim new world women and girls in Afghanistan have woken up to in the past few weeks.”

The last time the Taliban ruled the country women were barred from working, girls were blocked from going to school, and women had to be chaperoned by a male relative if they wanted to leave the house.

Heather Barr, associate director of the women’s rights division at Human Rights Watch, said: “It is wonderful news if Pakistan has agreed to grant entry to Afghanistan’s women’s football team.

“Fears for the safety of the members of the team will only have increased after last week’s statements from a Taliban official suggesting that women would no longer be permitted to play sports.”

Ms Barr, a former Afghanistan researcher at the leading human rights charity, argued neighboring countries have a critical position to take in supporting women and girls “urgently at risk” in Afghanistan to reach safety, given air evacuations from Afghanistan have been “halted, at least temporarily”.

She added: “The international community should support Afghanistan’s neighbors in providing this urgently needed assistance.”

While Chris Thomas, the founder of Football for Humanity, condemned the fact the young girls “fear for their lives” for simply playing sports.

He told The Independent: “That speaks volumes about the lethal culture that the Taliban has wrought all these years. The girls who have not let go of their dreams to be free, to survive and thrive are a testament to the power of sport to uplift the human spirit even in the face of insurmountable odds.

“They should be protected and nurtured because they will become symbols of hope, especially to the many young people who are silently suffering but whose spirits are likewise as unconquerable as the athletes they admire.

“Today, Pakistan supports them. Tomorrow, the entire sporting universe needs to step up to the plate. We should prove to the world – sport has the power to change the world.”

Female Afghan journalists and healthcare workers have been killed in attacks since peace negotiations started between the Taliban and the American-backed Afghan government last year. While the Taliban denies perpetrating these attacks, government ministers hold them responsible.

Meanwhile, the United Nations recently warned access to food aid and other critical services in Afghanistan is due to soon run out – also warning 18 million people are currently facing a humanitarian catastrophe, and an additional 18 million could rapidly be in the same position.

Note: Every article published in this section is extracted from several most genuine authentic sources on our daily life which brings us qualitative information. LR&A honors the spirit of Journalism of these global giants of News Broadcasting across the globe and outer space, some of them Are, HUFFPOST, Aljazeera, New York Times, CNBC, wall street journals, Reuters, google news, Wikipedia, the Hindu, USA Today, Financial Times, Times Magazines, United Nation Journals, BBC, National Geographic, animal planet, History Tv, Fox network, etc. Legal research & Analysis recommends all users kindly do read the original contents published by these mainstream media giants, simply click the link of the headline of the post you want to read also share with your friends quality information do not pay attention to unverified sources of News, fake news, news that can cause harm public at large are considered as fake news, LRA promotes the awareness regarding the spreading of fake news, or news without any genuine source of the platform, kindly follow the instruction and help community flourished.