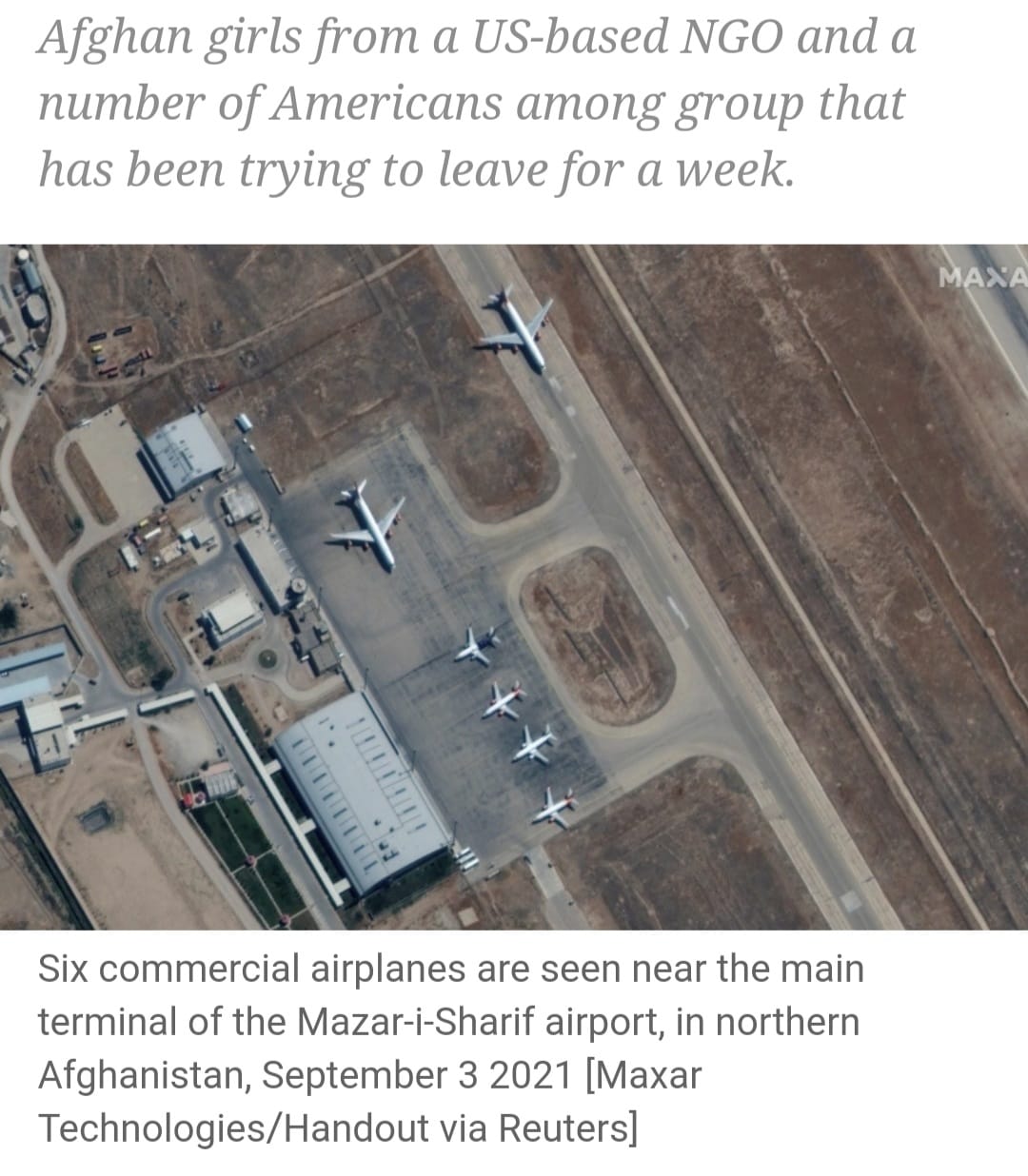 US President Joe Biden’s administration is facing mounting pressure amid reports that several hundred people, including Americans, have been prevented for a week from flying out of an airport in northern Afghanistan.

Marina LeGree, the founder and executive director of a small US non-governmental organization active in Afghanistan, said on Monday that some 600 to 1,300 people, including girls from her group, had been waiting near the Mazar-i-Sharif airport for as long as a week, amid confusion involving the Taliban and US officials.

That number is understood to include 19 Americans, though none are with LeGree’s group. Those waiting are being housed in various places in the city, she said.

“It’s been seven days and nothing’s moving,” LeGree told AFP, adding that six chartered planes were waiting at the airport to evacuate what some officials are calling “the NGO group”.

“The Taliban are simply not letting anything move.”

Her Virginia-based organization, which trains Afghan girls in leadership through physical activities like mountain climbing, is trying to evacuate a small group of girls and young women, all aged 16 to 23, and a few family members.

All are Hazara, an ethnic minority in Afghanistan that faced severe repression when the Taliban last controlled the country from 1996-2001.

She told US broadcaster MSNBC on Monday that some of her group had been called to go to the Kabul airport last week, where they were on plane manifests, but were not able to get in during the chaotic US airlift.

Some of her group are “really frustrated and confused as to why they’re still sitting” in Mazar-i-Sharif.

“We are not privy to the overall picture, so I’m not sure if it’s purely about money or what exactly is at stake here, but what we do know is we have women at risk and they can’t go back. We’ve got to go.”

LeGree, who has worked in Afghanistan since 2005 for aid groups and US agencies, expressed frustration with the role of the State Department in clearing the flights.

The group’s departure had seemed imminent until a few days ago when planning suddenly stopped.

A State Department spokesperson said Monday that while the US is committed to helping Americans and at-risk Afghans to leave, its resources in Afghanistan are seriously limited.

“We do not have personnel on the ground, we do not have air assets in the country, we do not control the airspace – whether over Afghanistan or elsewhere in the region,” the spokesperson told AFP.

“Given these constraints, we also do not have a reliable means to confirm the basic details of charter flights, including who may be organizing them, the number of US citizens and other priority groups on board, the accuracy of the rest of the manifest, and where they plan to land.”

The spokesperson added, “We will hold the Taliban to its pledge to let people freely depart Afghanistan.”

Satellite images of the airport from September 3 show six airplanes, one on a runway and others outside terminal buildings.

Biden’s Republican opposition has seized on the situation, which came at a time when his popularity has fallen sharply amid concerns about the Afghanistan evacuation and the mid-year surge in COVID-19 cases.

Michael McCaul, the top Republican on the House Foreign Affairs Committee, suggested Sunday the Taliban was holding the group as part of high-pressure negotiations with Washington.

The affair, he said on Fox News, was “turning into a hostage situation where they’re not going to allow American citizens to leave until they get full recognition from the United States”.

But LeGree said she would not characterize the situation that way.

“Nobody is guarding the door,” she said, even if her concern has grown as the days pass.

“If it isn’t resolved very soon, we’re worried for the physical safety of our girls,” she said.

A small group of Afghan women on Monday marched through the streets of Mazar-i-Sharif calling on the Taliban to respect their rights. ” We see no going back,” one banner read.

The Taliban have said women’s rights will be respected under Sharia law, but have not made clear what that will mean. Some women in Kabul have been sent home from their jobs.

A Democratic US senator, Richard Blumenthal, expressed impatience. “For days, my staff and I have been focused on getting these planes off the ground … Delays are not only frustrating, but they are also inexcusable,” he said in a statement.

“It is imperative that the State Department now do everything in its power to facilitate these planes’ safe arrival at our airbase in Doha, where they are cleared to land,” he added.

Eric Montalvo, a former US Marine Corps officer and a lawyer working with groups that chartered two of the six planes, was blunter.

“The Taliban is not holding these planes hostage,” he said in a statement to AFP.

“The problem is the US government. All the State Department has to do is make a phone call and these people will be able to leave immediately.”

The US completed its military withdrawal from Afghanistan on August 31 after weeks of chaos, following the Taliban’s stunningly rapid takeover of the country.

More than 120,000 people were flown out of Afghanistan in one of the largest such aerial operations in history, though US officials acknowledged having left a few hundred Americans behind, along with many vulnerable Afghans.

The Biden administration has repeatedly pledged to do everything possible to help those who want to leave.

On Monday, the US State Department announced that four American citizens had been able to leave Afghanistan by road, arriving in an unnamed neighboring country without any resistance from the Taliban.

They were the first officially acknowledged US departures since August 31.