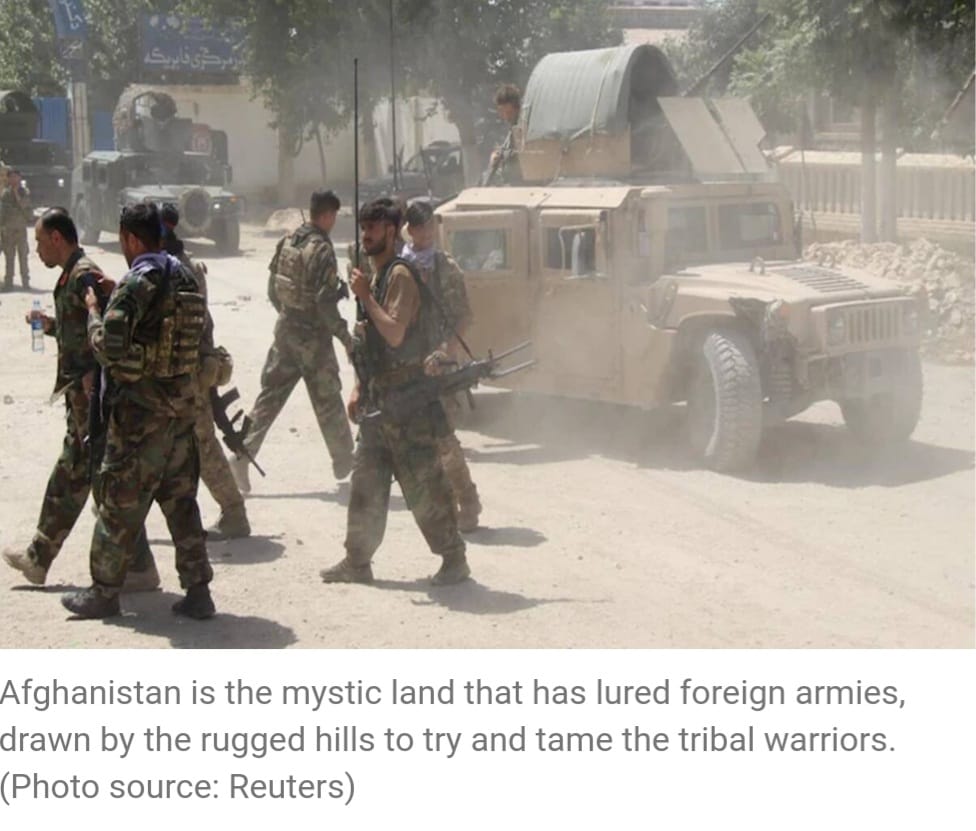 They are a mass of contradictions, murderers at heart, poetry on lips, with a brand new rifle, followed by an old wife (they’ll change the rifle but not their wife), they love music but hold musicians in contempt, they love fighting but make very bad soldiers, very poor discipline! Gen Tariq on Afghans.

They are a mass of contradictions, murderers at heart, poetry on lips, with a brand new rifle, followed by an old wife (they’ll change the rifle but not their wife), they love music but hold musicians in contempt, they love fighting but make very bad soldiers, very poor discipline! Gen Tariq on Afghans.

Afghanistan is the mystic land that has lured foreign armies, drawn by the rugged hills to try and tame the tribal warriors. The quote above is something that was never understood by the British when they were ruling the Indian subcontinent, in the Eighties by the Russians and recently the Americans who have spent trillions of dollars and training of the Afghan National Army (ANA). The Americans left a void, which is being filled up by the Taliban with the tacit support of the Pakistan Army. Reportedly Pakistan Army has sent in thirty thousand combatants, with a wish to control the narrative in a dynamic evolving situation.

With the Chinese interest in the region and being an ally, Pakistan is keen to exploit this opportunity to remain the Principal Player in this “Game of Thrones’ being played out.

The US, having withdrawn, continues to have its interest and is supporting the ANA by its air power. The Russians and Chinese too have their interests and talks being held at Qatar this day to which India has an opportunity to engage with the Taliban in the peace brokering and its future involvement; remains to be seen as to how it pans out.

The MEA has to develop a consensus with all the countries in ensuring that its staff at the Indian Embassy, as well as Afghani citizens of Indian origin, remains protected from the fundamentalist Taliban.

In the local electronic media, a narrative is being built that perhaps the IAF has a role to play, to support the government in power in Kabul. Under the circumstances to be pledging your bets with President Ashraf Ghani is not without risk of losing moral currency in engaging with the Taliban.

Should India send its troops to Afghanistan / provide military support to the current regime?

The Indian experience of Sri Lanka, OP PAWAN, has been buried away in time; a nightmare which the leadership at all levels to include political, bureaucracy (MEA), and the military leadership wish it had never happened.

Some considerations negate the thought of military involvement.

The political and military leadership has not considered any engagement in Afghanistan. The Indian defense forces have their commitments with an active Line of Actual Control (LAC) and Line of Control (LOC). The LOC has an ongoing ceasefire and is fragile. Both these areas need constant vigil, and no troops can be disengaged.

The Indian Air Force has depleted fighter squadron strength and has its task in carrying out its Primary Task of maintaining an active dominance along the LAC along with its support task of winter stocking of the regions in particular Ladakh.

The existing fleet needs a major overhaul and up-gradation which needs to be addressed rather than frittering away frugal resources to support a conflict that has no ownership and many conflicting interests.

A land-locked country, with a hostile environment in Afghanistan, India has no immediate interests that need protection, thus remains a major factor to stay away from a conflict with assured no gains.

What the future holds for all in Afghanistan only time will tell.