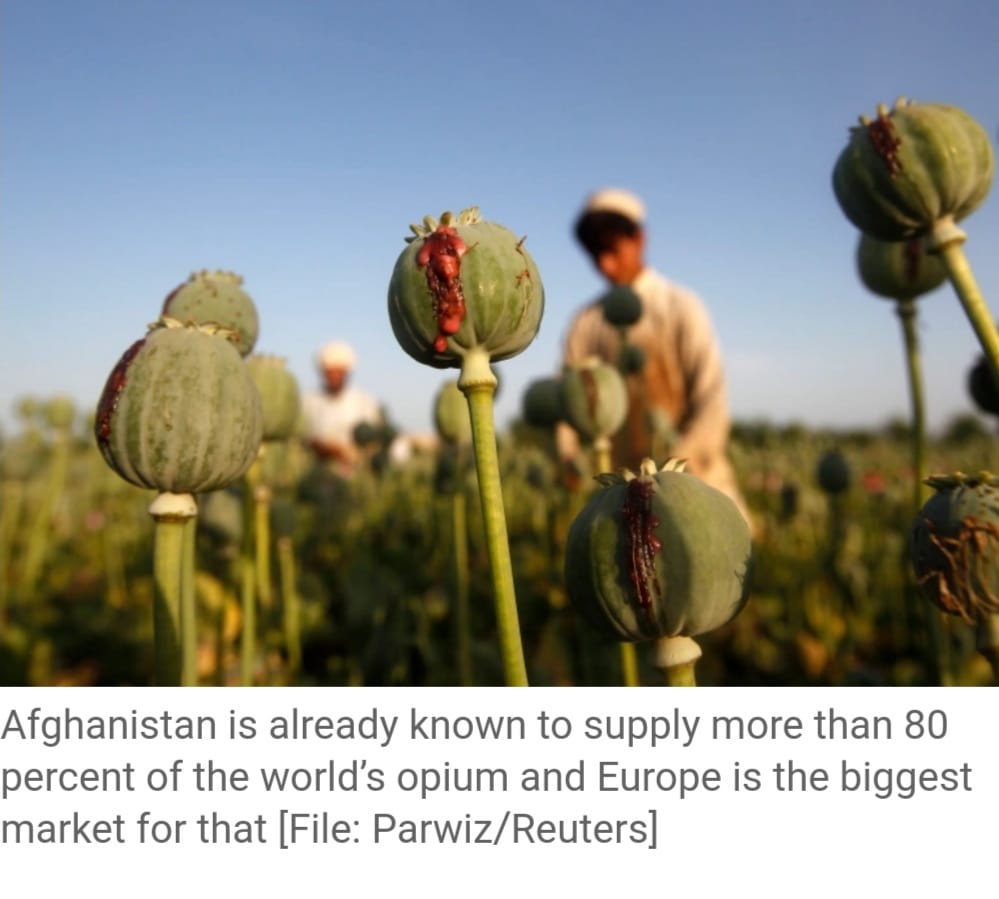 The Taliban has promised to crack down on the drug trade, but if the Afghan economy fails, a crisis could unfold, experts say.

Afghanistan is already the world’s largest supplier of opium. But opium, which is used to make heroin, is not the only illegal drug that the war-torn nation is producing.

Over the past four years, Afghans have also been getting better at making methamphetamine, known colloquially as speed, crystal, or meth.

In some parts of Afghanistan, methamphetamine output already appears to be outpacing that of opium. But, researchers have argued, not enough attention has been paid to the burgeoning illegal drug trade.

Now, with the US withdrawal, some European Union authorities worry that illegal Afghan methamphetamine might pose an increasing danger to Europe.

“The German federal police is intensively monitoring the situation,” a spokesperson from the authority told Al Jazeera, “because methamphetamine has been produced in large quantities in Afghanistan for several years now, and because of the danger that it could also reach the German or European market via traditional heroin smuggling routes.”

According to Philip Berry, a lecturer at King’s College and author of The War on Drugs and Anglo-American Relations: Lessons from Afghanistan, 2001-2011: “If Afghanistan’s methamphetamine industry continues to expand, there is the potential that Europe, along with other international markets, will become a more prominent destination.”

Afghans started making methamphetamine seriously only about four years ago, according to a November 2020 report by the European Monitoring Centre for Drugs and Drug Addiction (EMCDDA).

There had been reports of Afghans “cooking” meth up in kitchen-sized laboratories since 2013, extracting it from over-the-counter medicines such as cough syrups. But this process is complicated, dangerous, and requires chemistry skills.

It was when locals discovered they could extract methamphetamine from a local plant that production seems to have really taken off.

Ephedra, called bandak or oman locally, is a perennial grass easily harvested from local hillsides. Once used for firewood or to treat kidney ailments, it is now picked, packed, and dried, then chemically treated to extract ephedrine.

The latter process is simple and comparatively cheap. In a second, more complex step, the processed ephedra is used to make methamphetamine crystals.

“The data available suggests that Afghanistan has in a short period of time become a producer and supplier of relatively large quantities of low-cost ephedrine and methamphetamine,” the EMCDDA researchers warned.

“The potential scale of ephedrine and methamphetamine production … the income it generates and the speed at which it has emerged, are both surprising and worrying.”

They cautioned that meth manufacture may soon come to rival opium production in Afghanistan.

Afghanistan is already known to supply more than 80 percent of the world’s opium and Europe is the biggest market, with heroin smuggled in mostly through the Balkan states and Turkey.

In 2019, the United Nations Office on Drugs and Crime (UNODC) reported that the overall value of economic activity around opiates for export in Afghanistan was worth anywhere between $1.1bn and $2bn (nearly 1.7 billion euros), which is equal to up to 11 percent of the country’s gross domestic product (GDP).

Afghan methamphetamine is catching up.

A study published this month by the UK-based Overseas Development Institute (ODI) looked at how the Taliban was funded in the southwestern province of Nimruz, on the Iranian border.

Most of its income is from taxing legal goods crossing the border – and not illegal drugs.

But the ODI also concluded that, in terms of tonnage, more methamphetamine was being produced in, or moving through, the province than opium.

The study’s lead researcher, David Mansfield, told Al Jazeera that evidence from various quarters – including satellite imaging of potential meth production facilities, on-the-ground interviews, and shipments seized by police in different parts of the world, including in Turkey and on the Iran-Pakistan border – points to a rapidly growing methamphetamine trade.

Afghan methamphetamine has also made inroads into international markets. It has already been discovered by authorities in Africa, Australia, Indonesia, and Sri Lanka.

There are unconfirmed reports that some could have reached Europe, too.

“We believe that some [Afghan methamphetamine] have gone to Turkey,” said Laurent Laniel, an EMCDDA analyst focused on drug production and trafficking. “And if it reaches Turkey, then we assume that some will get to Europe.”

But Mansfield, who authored A State Built on Sand: How Opium Undermined Afghanistan, said Afghan meth has not had enough attention from European government agencies.

“There needs to be a more systematic approach to testing,” argued Mansfield, an independent consultant who has been researching and regularly visiting Afghanistan since 1997.

“Most agencies just test a substance to see if it’s meth and for its quality. They don’t tend to test whether it’s made from the ephedra plant or from pharmaceuticals.”

For example, although it has shared some concerns, the German federal police’s forensics department, which regularly examines seized drug shipments, has yet to test whether the meth it comes across is from Afghanistan.

And its officials told Al Jazeera the department is unlikely to do so unless it receives a legal request or order from a body such as the UNODC.

Currently, Australian law enforcement is among the few agencies testing to see if methamphetamine they catch is derived from Afghan ephedra plants.

All the expert’s Al Jazeera interviewed said it was impossible to know whether more methamphetamine or opium would head to Europe under the Taliban’s rule.

“It is unsurprising that the Taliban, attempting to position itself as a legitimate government, has pledged to ban narcotics production and smuggling,” Berry said.

“They may attempt to use narcotics control to gain international recognition and development funding.”

Even if they do ban narcotics, Berry noted: “The past 20 years have shown the difficultly of sustaining bans if the appropriate mitigation strategies are not in place.”

Neither Berry nor Mansfield believes that the lack of American power inside the country will make much difference.

Since 2018, US and Afghan troops had slowed their bombings of drug production facilities.

Mansfield said even before this month’s events, most meth, and opium-producing rural areas were under the tacit control of the Taliban.

“Why does the Taliban taking Kabul to change the security and economic conditions in those [rural] areas? It doesn’t.”

A more important factor, he argued, is how the Afghan economy performs from now on.

“If there is no way to fund a government, there won’t be any more government jobs. A lot of people may head back to the land. Opium poppy cultivation is a very labor-intensive job. If there’s more labor, there might be more opium.

“Whether that happens will be a function of how the Taliban chooses to run the country and how Western donors choose to engage with the Taliban.

“The imposition of widespread sanctions could well fuel an economic crisis that would lead to large numbers of refugees and increased levels of drug production, that would undoubtedly impact the region and Europe.”